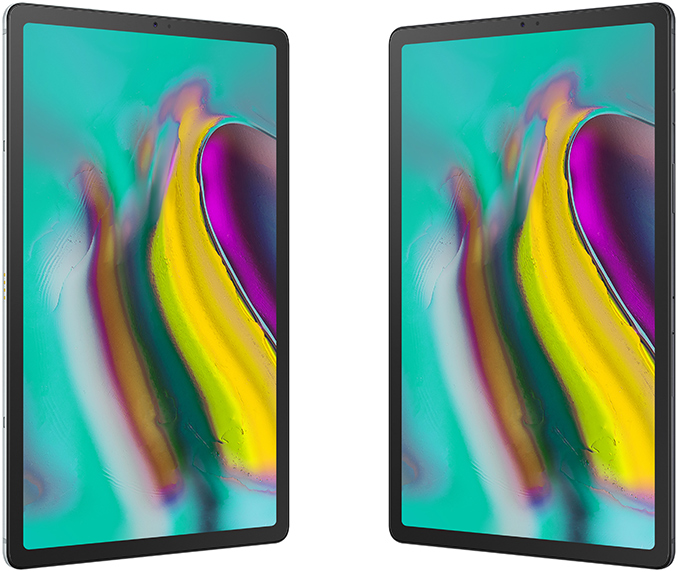 Samsung today introduced its new mid-range Google Android-based tablet. Despite its formal positioning for consumers, the Galaxy Tab S5e features a rather large 10.5-inch sAMOLED display, a decent SoC, plenty of memory as well as storage, an advanced audio sub-system, a USB Type-C connector, and even compatibility with Samsung’s DeX platform for productivity applications. In general, the new tablet from Samsung brings together a decent performance, a good display, compatibility with productivity apps, compact dimensions, and a relatively low price - a rather interesting combination that we have not encountered before.

The Samsung Galaxy Tab S5e is powered by an unidentified SoC that integrates two 64-bit high-performance cores, six 64-bit energy-efficient cores, and an unknown iGPU. It is possible that the application processor was developed by Samsung itself, but at this point this is a speculation. The SoC is accompanied by 4 or 6 GB of DRAM and 64 or 128 GB of NAND flash storage (expandable by 512 GB using a microSDXC card). The tablet is outfitted with a 10.5-inch Super AMOLED display with a 2560×1600 resolution and thin bezels, similar to the one found on a considerably more expensive Galaxy Tab S4, but presumably without a stylus support. Imaging capabilities of the device comprise of a 13 MP rear sensor as well as an 8 MP front sensor.

When it comes to wireless connectivity features of the Galaxy Tab S5e, they include an 802.11ac Wi-Fi controller with MU-MIMO support, and Bluetooth 5.0. Samsung says that models with a 4G/LTE modem will be available later. Since the product is aimed at consumers, not road warriors, prioritizing the launch of Wi-Fi-only versions makes sense for the manufacturer. As for wired I/O, the Galaxy Tab S5e is outfitted with a USB 3.1 Type-C interface for audio, data, and charging, as well as a set of POGO connectors for keyboards or some other gear. 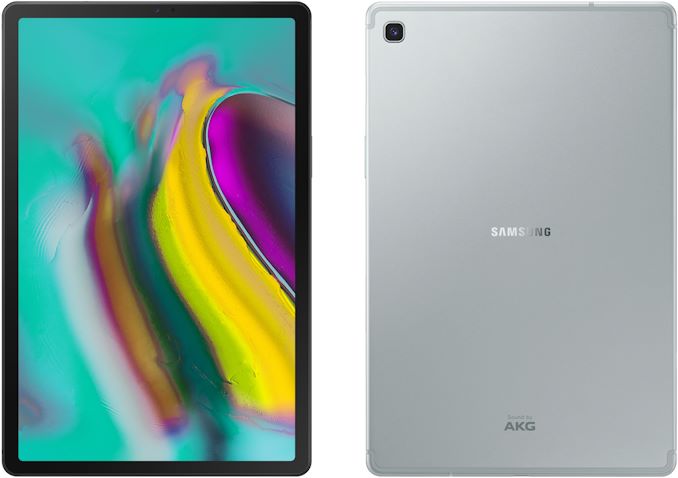 Like all good tablets these days, the Galaxy Tab S5e has a rather vast set of sensors, including an accelerometer, a gyroscope, a proximity sensor, a fingerprint scanner, a geomagnetic sensor (a compass), an RGB light sensor, and so on. The sensors can detect how the tablet is held (or placed) and then Samsung’s software automatically adjusts its quad-speaker audio sub-system co-designed with AKG for the best possible experience.

Designed primarily with consumers in mind, the Galaxy Tab S5e is very light and compact. It weights 400 grams and is just 5.5 mm thick, which is considerably lighter and thinner when compared to most 10-inch class tablets. Despite its rather humble z-height, the tablet packs a 7,040 mAh battery that provides up to 14.5 hours of battery life, according to the manufacturer.

One interesting feature of the consumer-oriented Galaxy Tab S5e is its support for Samsung’s DeX platform that enables desktop-like experience on Android-based tablets (e.g., open up multiple windows, re-size windows, drag and drop content, etc.). Obviously, to take full advantage of DeX, users will need the optional Book Cover Keyboard that is sold separately. In the meantime, Samsung does not indicate that users may attach the tablet to a full-sized display using a USB Type-C to HDMI adapter if more screen real estate is needed, so this capability will likely remain exclusive to more expensive Galaxy Tab devices. Besides, the Galaxy Tab S5e also does not support Samsung’s Knox mobile security platform to protect valuable and confidential information, which is pretty logical given its positioning.

Samsung plans to start sales of its Galaxy Tab S5e in the second quarter of 2019 starting at $399.99. To increase the value of the product, Samsung will include a 4-months YouTube Premium subscription and a 3-months Spotify Premium subscription with the device (at least where available). 4G/LTE-enabled models will follow on later this year, their pricing is unknown.