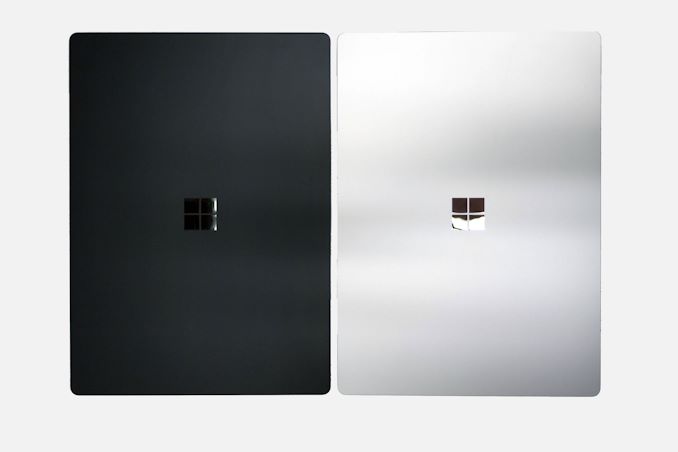 Occasionally the stars align. It is very rare in the laptop space that we're able to test two devices, with two very different CPU platforms, with the fewest number of variables possible. But those stars have aligned in 2019, and thanks to Microsoft's Surface Laptop 3 family, we have a rare opportunity to compare AMD and Intel's current-generation laptop platforms in a way that wouldn't normally be possible.

In October at Microsoft’s Surface product launch in New York City, the Redmond company announced the new Surface Laptop 3 family, complete with a new 15-inch model. But what was particularly interesting for us is that the company launched not one, but two variants of this laptop: a consumer model based on AMD's Ryzen "Picasso" Zen+ APU platform, and a corporate model based on Intel's Ice Lake-U platform. And today we're going to get a chance to compare both of these laptops, pitting the top-end Ryzen 7 3780U model against the equally top-end Core i7-1065G7 model.

Microsoft sampled the Ryzen 5 3580U at the launch, and if you’ve not seen the Surface Laptop 3 review, be sure to check that out as well as it goes over the laptop in detail. Today’s focus will be strictly on what is inside.

As a quick refresher to the platforms we'll be testing, AMD launched the Picasso APU at CES in January 2019. Built on the GlobalFoundries' 12 nm process, it promised to be a significant upgrade to AMD's previous laptop / mobile platform, Raven Ridge. Featuring two or four cores based on AMD's Zen+ architecture, the processor peaks at 4.0 GHz in the top model. On the graphics side, AMD has continued with the Vega iGPU which has been so successful for them in the laptop space, providing significantly more 3D grunt than the previous Intel models could match.

Picasso ships with different size GPUs in terms of Compute Units (CUs) depending on the APU model. The lowest tier Ryzen 3 3200U offers just three CUs, the Ryzen 3 3300U offers six, the Ryzen 5 models offer eight, and the top-tier Ryzen 7 normally offers ten CUs. But for Microsoft and the Surface Laptop 3, AMD has quite literally taken that up to 11, with the Surface Laptop APUs coming with one additional compute unit, bringing about Vega 9 and Vega 11 respectively. 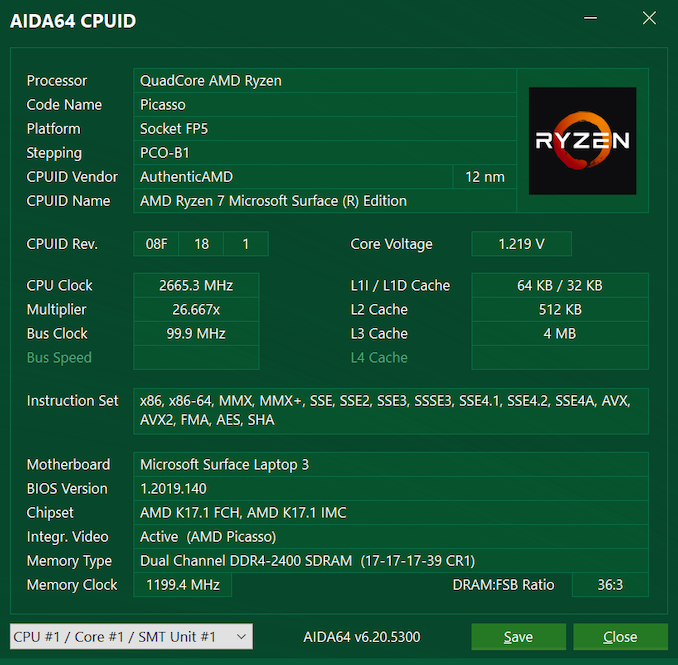 Picasso has been a solid offering, bringing a much-needed boost to AMD’s laptop focused efforts. Raven Ridge suffered from particularly high idle power draw and we were glad to see that AMD has addressed that to a degree with Picasso, although they still have work to do in that area. They also entered 2019 supporting only DDR4-2400, putting them at a disadvantage in the laptop space compared to the LPDDR that most laptops ship with, although Intel has been slow to move to LPDDR4, they’ve finally made that jump.

When it comes to Picasso and today's article, it should also be noted that like previous AMD APUs before it, AMD's fully integrated chips are about half a generation behind their discrete CPUs and GPUs. So while AMD is shipping the even newer Zen 2 architecture on desktops and servers, it's not yet available for laptops. Instead, the Zen+ based Picasso is still their current-generation platform for mobile. 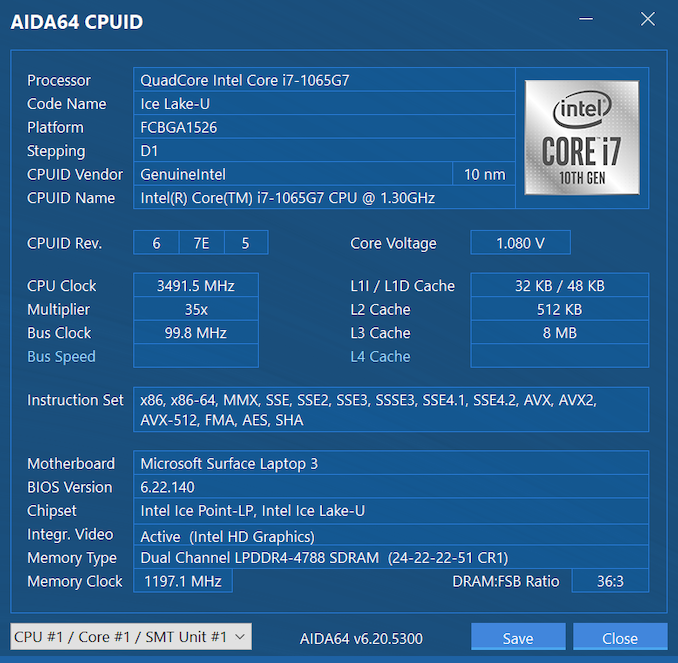 On the Intel side, Microsoft opted for Intel’s Ice Lake platform for the business version of the Surface Laptop 3. Intel's latest and greatest platform, Ice Lake has seen a rough bring-up. Intel’s manufacturing woes are well documented, and it's only now, after more than two years of delays that Intel is shipping 10 nm chips in volume.

Intel’s Ice Lake platform features the new Sunny Cove CPU architecture, which Intel claims has an 18% higher Instruction-per-clock rate (IPC) than its outgoing Skylake microarchitecture, which has more or less played out to be pretty accurate. But the new 10 nm process is not as optimized as the outgoing 14 nm one has become, and the top-tier Ice Lake Core i7-1065G7 maxes out at just 3.9 GHz, a 20% lower clockspeed than Intel's top-tier 14 nm laptop chip, the 4.9 Ghz Comet Lake Core i7-10510U. So, while Intel’s newest CPU is still faster than the old one, things are never as clear as they may seem. With an 18% IPC increase but 20% lower peak clockspeeds, the overall net gain has not been very much. Luckily for Intel, they have enjoyed a significant historical CPU performance lead, which has buffered them somewhat in the laptop space.

But for everything going on with the CPU of Ice Lake, it's the GPU side where things really get interesting. Intel’s integrated GPU offerings have been sufficient for desktop use for quite some time – but just so. Intel has offered excellent media blocks, however the 3D gaming performance of their standard chips has been lacking, especially compared to AMD’s excellent Vega iGPU. Ice Lake addresses that in a couple of ways. The first is through their new Gen 11 graphics architecture, bringing about some minor architectural changes to improve their performance. The second is how much die space Intel is outright allocating for the GPU. In terms of the top-tier processor, the amount is a lot. The latest Intel Comet Lake Core i7-10510U processor offers 24 Execution Units (EUs) of Gen 9.5 graphics, but Intel’s Ice Lake processors offer up to 64 EUs of Gen 11 graphics.

Ice Lake also offers some new functionality, including the much-needed introduction of LPDDR4X support. LPDDR4X not only offers more memory bandwidth (up to 60.6GB/sec), but it's also available in higher capacities than the last-generation LPDDR3, finally allowing low power laptops to pack in more than 16GB of RAM. There’s also broader Thunderbolt 3 support, as well as major improvements to Modern Standby which provides a more tablet-like experience when resuming the device. It all adds up to a significantly better offering than Intel was able to achieve previously.

As stated earlier, it is rare to get a chance to test two different laptop platforms within the same laptop chassis. For various reasons, manufacturers typically use different chassis designs for different platforms – to accommodate things like differences in PCB sizes and batteries – making it difficult to do an apples-to-apples laptop platform comparison. Being able to review two platforms within the same laptop design is incredibly important, since as we’ve seen so many times, the manufacturer can play a significant role in overall system performance based on what the select for a laptop’s size, weight, cooling capabilities, and its SoC power limits.

Consequently, the Microsoft Surface Laptop 3 15-inch laptops are as close to an apples-to-apples comparison between Picasso and Ice Lake as you can make. They both feature the top-end processor from each manufacturer, both offer 16 GB of RAM, and both share the same chassis for cooling.