Two other arguments for having SMT enabled or disabled comes down to power consumption and temperature.

With SMT enabled, the core utilization is expected to be higher, with more instructions flowing through and being processed per cycle. This naturally increases the power requirements on the core, but might also reduce the frequency of the core. The trade-off is meant to be that the work going through the core should be more than enough to make up for extra power used, or any lower frequency. The lower frequency should enable a more efficient throughput, assuming the voltage is adjusted accordingly.

This is perhaps where AMD and Intel differ slightly. Intel’s turbo frequency range is hard-bound to specific frequency values based on core loading, regardless of how many threads are active or how many threads per core are active. The activity is a little more opportunistic when we reach steady state power, although exactly how far down the line that is will depend on what the motherboard has set the power length to. AMD’s frequency is continually opportunistic from the moment load is applied: it obviously scales down as more cores are loaded, but it will balance up and down based on core load at all times. On the side of thermals, this will depend on the heat density being generated in each core, but this also acts as a feedback loop into the turbo algorithm if the power limit has not been reached.

For our analysis here, we’ve picked two benchmarks. Agisoft, which is a variable threaded test performs practically the same with SMT On/Off, and 3DPMavx, a pure MT test which gets the biggest gain from SMT.

Photoscan from Agisoft is a 2D image to 3D model creator, using dozens of high-quality 2D images to generate related point maps to form a 3D model, before finally texturing the model using the images provided. It is used in archiving artefacts, as well as converting 2D sculpture into 3D scenes. Our test analyses a standardized set of 85 x 18 megapixel photos, with a result measured in time to complete. 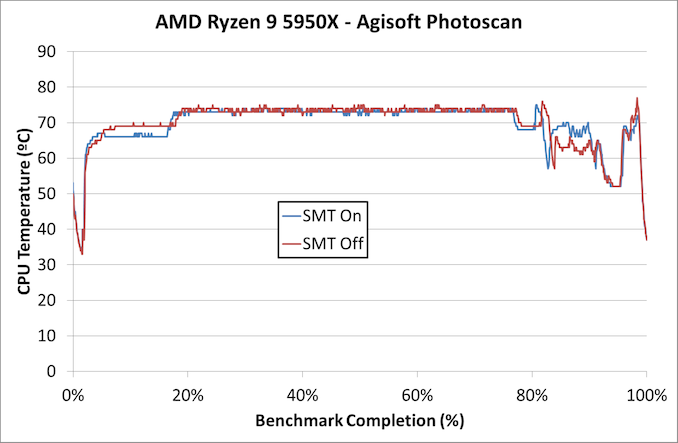 Simply looking at CPU temperatures while running our real-world Agisoft test, our current setup (MSI X570 Godlike with Noctua NH12S) shows that both CPUs will flutter around 74ºC sustained. Perhaps the interesting element is at the beginning of the test, where the CPU temperatures are higher in SMT Off mode. Looking into the data, and during SMT Off, the processor is at 4300 MHz, compared to 4150 MHz when SMT is enabled. This would account for the difference. 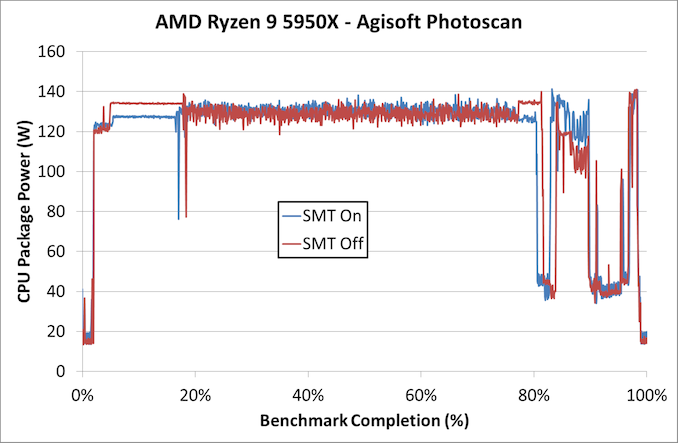 Looking at power, we can follow that for the bulk of the test, both processors have similar package power consumption, around 130 W. The SMT Off is drawing more power during the first couple of minutes of the test, due to the higher frequency. Clearly the thermal density in this part of the test by only having one thread per core is allowing for a higher turbo. 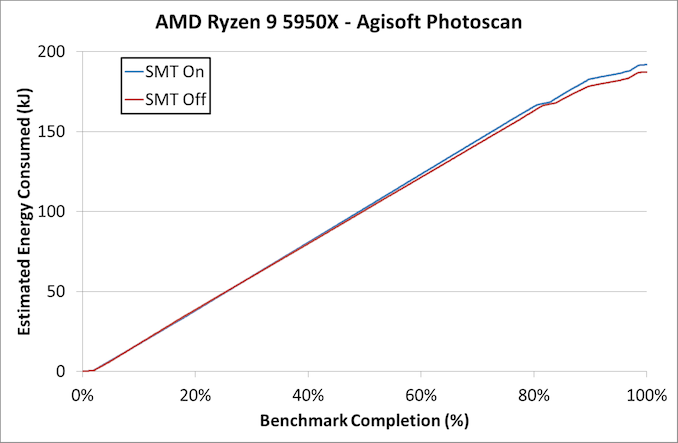 If we measure the total power of the test, it’s basically identical in any metric that matters. Nearer the end of the test, where the workload is more variably threaded, this is where the SMT Off mode seems to come under power. This benchmark completion time is essentially the same due to the nature of the test, but SMT Off comes in at 2% lower power overall.

Our 3DPM test is an algorithmic sequence of non-interactive random three-dimensional movement, designed to simulate molecular diffusive movement inside a gas or a fluid. The simulation is made non-interactive (i.e. no two molecules will collide) due to the original average movement of each particle taking collisions into account. Our test cycles through six movement algorithms at ten seconds apiece, followed by ten seconds of idle, with the whole loop being repeated six times, taking about 20 minutes, regardless of how fast or slow the processor is. The related performance figure is millions of particle movements per second. Each algorithm has been accelerated for AVX2. 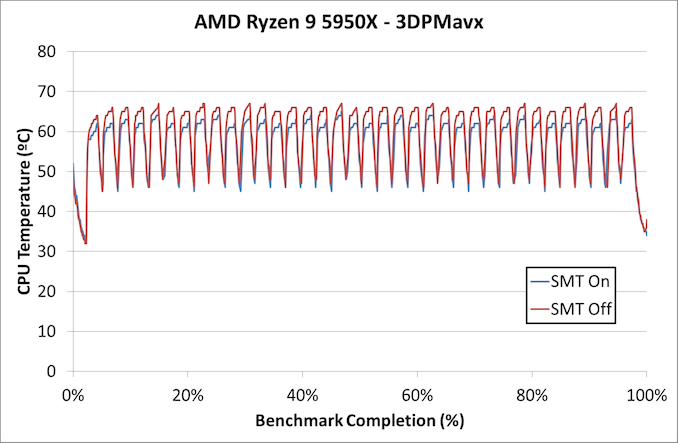 On the temperature side of things, it is clear that the SMT Off mode again puts up a higher thermal profile. Temperatures this time peak at 66ºC, but it is clear the difference between the two modes. 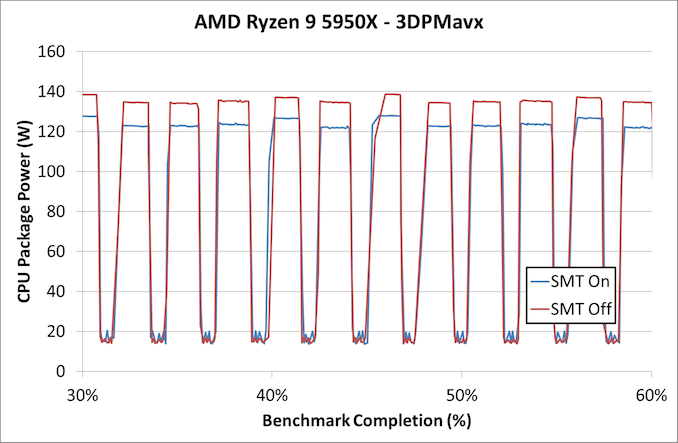 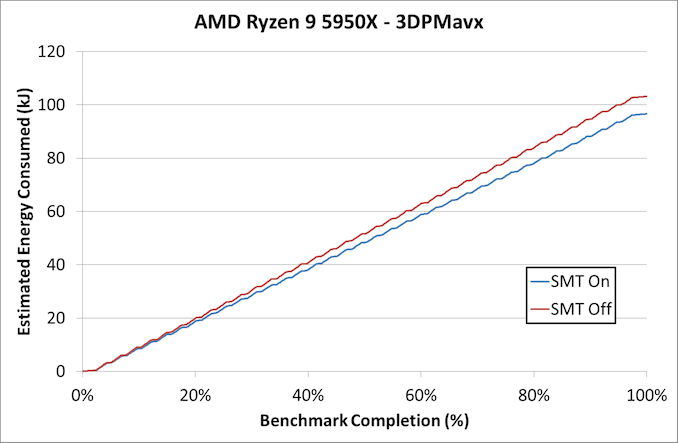 With the higher frequency with SMT Off, the estimated total power consumption is 6.8% higher. This appears to be very constant throughout the benchmark, which lasts about 20 minutes total.

But, let us add in the performance numbers. Because 3DPMavx can take advantage of SMT On, that mode scores +77.5% by having two threads per core rather than one (a score of 10245 vs 5773). Combined this makes SMT On mode +91% better in performance per watt on this benchmark.