In order to test the quality and consistency of a keyboard, we are using a texture analyser that is programmed to measure and display the actuation force of the standard keyboard keys. By measuring the actuation force of every key, the quality and consistency of the keyboard can be quantified. It can also reveal design issues, such as the larger keys being far softer to press than the main keys of the keyboard. The actuation force is measured in Centinewton (cN). Some companies use another figure, gram-force (gf). The conversion formula is 1 cN = 1.02 gf (i.e. they are about the same). A high-quality keyboard should be as consistent as possible, with an average actuation force as near to the manufacturer's specs as possible and a disparity of less than ±10%. Greater differences are likely to be perceptible by users. It is worth noting that there is typically variance among keyboards, although most keyboard companies will try and maintain consistency - as with other reviews, we're testing our sample only.

The machine we use for our testing is accurate enough to provide readings with a resolution of 0.1 cN. For wider keys (e.g. Enter, Space Bar, etc.), the measurement is taking place at the center of the key, right above the switch. Note that large keys generally have a lower actuation force even if the actuation point is at the dead center of the key. This is natural, as the size and weight of the keycap reduce the required actuation force. For this reason, we do display the force required to actuate every key but we only use the results of the typically sized keys for our consistency calculations. Still, very low figures on medium sized keys, such as the Shift and Enter keys reveal design issues and can easily be perceptible by the user.

The performance figures we received from the TKO Tournament were not unexpected. Kailh is a reputable switch manufacturer but the quality of their products rarely is as consistent as Cherry’s. Regardless, the consistency of the switches on the TKO Tournament is fairly good, at ±5.2%. This small a disparity should not be perceivable by even the most sensitive of fingers. The average force at the actuation point (not at the maximum pressure point) is at 44.9 cN, a good figure for this type of switch.

I always try to use every keyboard that we review as my personal keyboard for at least a week. My typical weekly usage includes a lot of typing (about 100-150 pages), a few hours of gaming and some casual usage, such as internet browsing and messaging. I personally prefer Cherry MX Brown or similar (tactile) switches for such tasks, making this particular version of the Kinesis TKO Tournament theoretically ideal for me. Regardless, moving to a 60% keyboard layout proved to require quite a bit of a learning curve – it took me several days to get used to it and especially the position of the top row keys. The lack of a wrist rest also was not very comfortable for very long-term typing. On the other hand, the switches were perfect and placed a minimal strain on the fingers and tendons even after hours of typing. For coders or other types of work where pausing is frequent, it would be an excellent workplace keyboard.

For gaming, the TKO Tournament is truly a masterpiece when used as a single-hand keyboard, tilted sideways. It is very comfortable, with the difference becoming apparent if used for hours at a time. The split Space Bar key may feel strange at first but actually is very convenient once a gamer is used to it. The programmability of the keyboard is versatile enough, allowing for text/chat commands and simple macros to be programmed and tethered to any key, as well as for very quick profile/layout switching. The downside is that, for games with in-game chatting, the tilted position makes typing very awkward and uncomfortable. Kinesis themselves advises against tilting the keyboard sideways and then trying to use it with both hands.

Kinesis took a large leap of faith a couple of years ago with the founding of their Kinesis Gaming brand, a product line meant to combine ergonomics with gaming features and high-level performance. The TKO Tournament is another big jump for Kinesis, as a portable 60% mechanical keyboard is definitely not something we are used to seeing in the ranks of a company that focuses on the design of ergonomic products.

Overall, the quality of the TKO Tournament is very good. We did not like the fact that we found Kailh switches on a keyboard this expensive, but we cannot deny the fact that hot-swappable switches can come in handy, especially in the rare event where a switch might actually die. Other than that, the keyboard is exceptionally well made, with an excellently finished metal body and great quality keycaps. The backlighting is very well applied too, making the TKO Tournament stand out on any desk it is placed upon.

If you are coming from a full 100% layout keyboard, the 60% layout definitely requires a learning curve. It is adequate for regular work use and perhaps even better than 100% keyboards for specific applications, yet most professionals would not ditch a full keyboard for a 60% layout without a specific reason. For professionals that do use more than one PC and/or want their macros and advanced commands following them where they go, the TKO Tournament makes sense.

But productivity is not the primary reason of the TKO Tournament’s existence – it is a mechanical keyboard that was developed for gaming with portability in mind. Even more specifically, it is mostly meant for games that only require one hand on the keyboard. That makes the TKO Tournament a true weapon for FPS/MOBA games, which are the most popular types of games in events that Kinesis has been sponsoring.

Another advantage of the TKO Tournament is the integration of all advanced programming into the keyboard itself. The supplied software is but a tool that programs the keyboard, not a software package that will work only on the system that is installed on. Once programmed, the keyboard does not require any software to perform any of its advanced functions. It will retain its functions when connected to any other system, even if that other system runs an entirely different OS. Only a few OS-specific commands may not work but that is all.

This does come with a bit of a trade-off, however: the self-reliant keyboard cannot perform super complex macros or commands that have to signal the OS, such as launching external applications. For gamers coming from more traditional third-party marco software, this may be an issue. Furthermore, the keyboard's very nature limits its versatility and purpose as a stationary desktop keyboard. 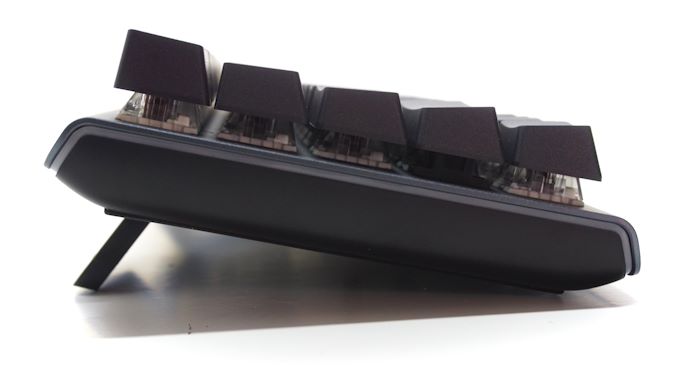 The Kinesis TKO Tournament is definitely not a keyboard meant for every kind of user. If anything, it is a keyboard designed for a very specific group of gamers: those who frequently attend gaming events and want a portable, top-quality keyboard that can also carry its advanced functions along with it without having to rely on any software. The retail price of $160 is steep for any mechanical keyboard, let alone for a 60% layout keyboard. On the other hand, the features of the TKO Tournament are currently unmatched by any other similar keyboard available, which is why we feel that a lot of advanced gamers will consider purchasing it, regardless of its high retail price.