Today Apple announced updates to its MacBook, MacBook Air and MacBook Pro lines. The notebooks aren't available until tomorrow, but I've started putting together some analysis on the specs. It turns out there's quite a bit of give and take in Apple's new announcements; you get more, but you do give some up.

The new notebooks are also very important as they put to rest rumors of NVIDIA's departure from the chipset business, at least at this point. All of the notebooks I'm talking about here use a brand new Intel chipset by NVIDIA, called the GeForce 9400M. Apple is actually the first OEM to announce support for the 9400M, the chipset itself doesn't actually launch until tomorrow.

While Apple is sticking to Intel CPUs, it has forgone G45 in favor of NVIDIA's offerings - sending a huge message to Intel: the quality of its integrated graphics must improve. While it's unlikely that Nehalem's eventual on-package GPUs will be enough, Larrabee could eventually win Apple's affection once more.

For consumers, this should mean snappier graphics performance (as well as more attractive iMac and Mac mini options assuming NVIDIA's chipsets make their way over there as well). However my quick discussion today will focus more on size and battery life.

Ok now this is kind of sneaky, Apple made the MacBook Pro thinner than any other MacBook Pro, but it's wider, deeper and heavier. Granted, these are minor increases in dimensions, total volume actually decreased by about a percent. The 0.1 lbs increase in weight is most likely due to the use of glass on both the display and trackpad. 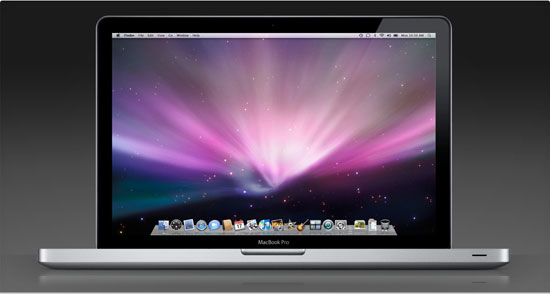 But for so much glass only a 0.1 lbs increase in weight isn't bad, oh but wait, the battery went from a 60WHr unit to a 50WHr unit. A lighter battery to offset weight gains elsewhere.

The give and take continues when you look at the hardware specs. Apple did a lot to reduce power consumption on the MacBook Pro: the GeForce 9400M chipset will use less power than Intel's G35M which was used on the previous notebook, DDR3 runs at a lower voltage than DDR2 (1.5V vs. 1.8V) and thus we see a drop in power there as well. However the reduction in total system power needs is offset by the fact that the new MacBook Pro has a smaller battery, so I'd expect battery life to stay roughly the same.

Granted the MacBook Pro was never a slouch when it came to battery life, I measured a worst case of 3.38 hours on the MacBook Pro and a best case of over 5.1 hours - just don't expect any better from the new one.