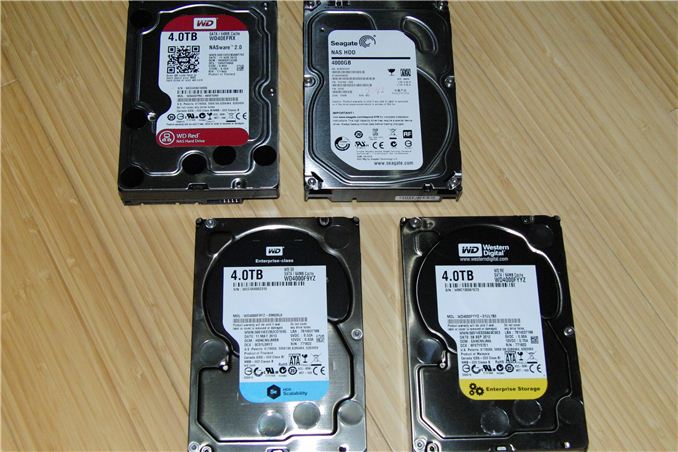 The SMB / SOHO / consumer NAS market is expected to experience good growth over the next few years. With declining PC sales and increase in affordability of SSDs, hard drive vendors have scrambled to make up for the deficit and increase revenue by targeting the NAS market. Hard drive models specifically catering to 1-5 bay consumer NAS units have been introduced by both Western Digital and Seagate. Seagate took the lead in the capacity segment with the launch of the 4 TB NAS HDD in June 2013. Western Digital achieved parity with the launch of the second generation WD Red models yesterday.

The correct choice of hard drives for a NAS system is influenced by a number of factors. These include expected workloads, performance requirements and power consumption restrictions, amongst others. In this review, we will discuss some of these aspects while evaluating four different hard drives targeting the NAS market:

While the WD Red and Seagate NAS HDD compete against each other in the same market segment (consumer / SOHO NAS units with 1-5 bays), the WD Re and WD Se are portrayed as complementary offerings for higher end NAS units. We will also try to determine how they differ in the course of this article.

Western Digital provided us with at least two drives each of the WD Red, WD Se and WD Re, but, Seagate came forward with only one disk. Readers of our initial WD Red 3 TB review would have found us evaluating the disks in multiple NAS units with multiple RAID configurations. Unfortunately, Seagate's sampling forced us to rethink our review strategy for these NAS drives. We will start off with a feature set comparison of the four drives followed by a look at the raw performance when connected directly to a SATA 6 Gbps port. A 2-bay Intel Atom-based NAS (LenovoEMC PX2-300D) with single-bay occupancy is then used to evaluate performance in a networked environment. Power consumption numbers and other factors are addressed in the final section with the networked configuration as a point of reference.

We used two testbeds in our evaluation, one for benchmarking the raw drive performance and the other for evaluating performance when placed in a NAS unit.

Our NAS testbed was built for evaluating NAS units when subject to access from multiple clients (virtual machines). We ran the benchmarks presented in this review on one of the twenty five available Windows 7 VMs.

The hard drives under the scanner were placed in a single-drive configuration in the Intel Atom D525-based LenovoEMC PX2-300D. The network links of the PX2-300D were bonded in LACP 802.3ad mode, but that shouldn't have any bearing on the results since we are looking at a single client scenario with a single GbE link.