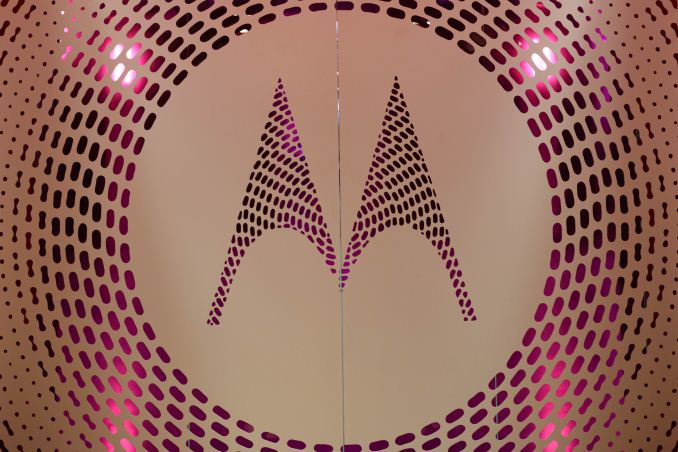 Motorola has been through a lot, to say the least. It was only a few years ago that Motorola had become an OEM struggling to stay afloat, as it was effectively an ODM for network operators in the US. We saw phone after phone pushed out with no real cohesive strategy. After its acquisition by Google, we saw a major shift. Motoblur was removed, and we saw a move AOSP UI to facilitate faster updates and smoother experience. The only real changes were Motorola’s custom apps and features, which still followed Android’s design principles. However, the Moto X seemed to lack in certain areas. The Snapdragon S4 Pro just couldn’t keep up with the Snapdragon 800 in performance and also used more power. The Clear Pixel camera was definitely interesting from an academic perspective, but at launch it was rather disappointing. Combined with Moto Maker exclusivity to AT&T and general exclusivity to the US, the Moto X was a great idea held back by timing and distribution. Today, Motorola hopes to make things right with the new Moto X. They’re also launching a new Moto G, the Moto 360, and Moto Hint.

This brings us to the new Moto X. While Motorola is being acquired by Lenovo, it’s clear that the Motorola I saw today is still very much the same Motorola from the Google era. The new Moto X continues all of the differentiating features that we saw with the previous Moto X, and makes it better. Before we get into all of this though, we’ll go over the basics first. I’ve included these basic specs in the spec sheet to make things quick, as there’s a great deal of ground to cover for a first impressions piece.

As one can see, the new Moto X has a 5.2” 1080p SAMOLED display. In discussions with Motorola a new emitter material for the display was explicitly mentioned. This and the size/resolution of the display suggest that we’re looking at the same display generation as the Galaxy S5. However, in practice it isn't, after taking a quick look at the maximum luminance of the display. While the SoC isn’t Snapdragon 805, the use of a lower 1080p resolution means that it will be competitive with 1440p Snapdragon 805 devices. We also see a move from the 10.5MP Clear Pixel sensor to a standard 13MP Sony sensor. The relatively small battery is a bit concerning but there are a great deal of mitigations done by Motorola to try and keep this from being an issue. 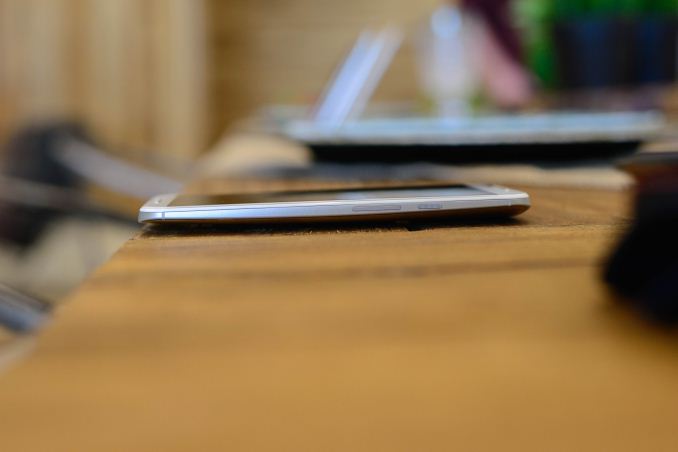 Those make up the basics, and while I’m definitely going to get into more detail about those in a bit, one of the most immediate, major improvements are the new materials. Much like the Note 4, we see a metal ring that runs around the side of the phone, but unlike the Note 4 the rest of the phone curves outwards to reach its max thickness. The result is a phone similar in that the feel is much thinner than the maximum thickness suggests. The sheer thinness of the phone also helps with one-handed use. While not as compact as the first Moto X, the shape definitely makes the phone easier to use than the Samsung Galaxy S5 with one hand. The thin bezels and generally small profile makes the new Moto X closer to the LG G2 in usability with one hand, which is definitely great considering that this phone has dual front-facing speakers with an amp to go with it. The metal ring also serves as the antenna, and Motorola has done a surprising amount of work to make this happen which I’ll get to in a moment. Around this ring, on top we see the SIM tray and headphone jack. On the right side, there’s the power button and volume rocker. Both are clicky with no real slack, and the power button has a ridged pattern to it to distinguish it from the volume rocker. On the left side there’s nothing but the metal band, and on the bottom we see the microUSB port. 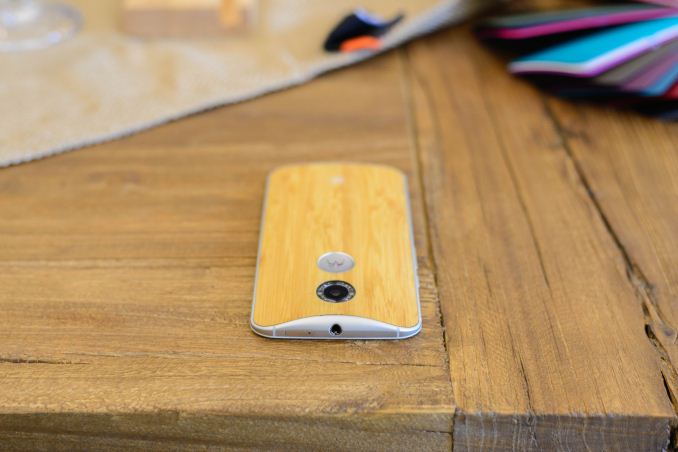 The front of the phone is dominated by the display, and there are a surprising number of elements to look at. There are two speaker grilles, which are made of aluminum and have the same ridged texture as the power button, which can have their color customized on Moto Maker. We see three light dots, two round circles, and a rounded rectangle. These make up the IR transmitters, a front facing camera, IR receiver, and the light sensor/proximity sensor. While the appearance of the IR transmitters, camera, and IR receiver make it appear that this phone has a 3D perspective feature like the Amazon Fire Phone, this is actually used to enable an improved Moto Display, air gestures, and Attentive Display. There’s also the same “magic” fused glass-plastic top layer that means there’s no lip to feel when swiping off the edge of the display, which definitely feels great. 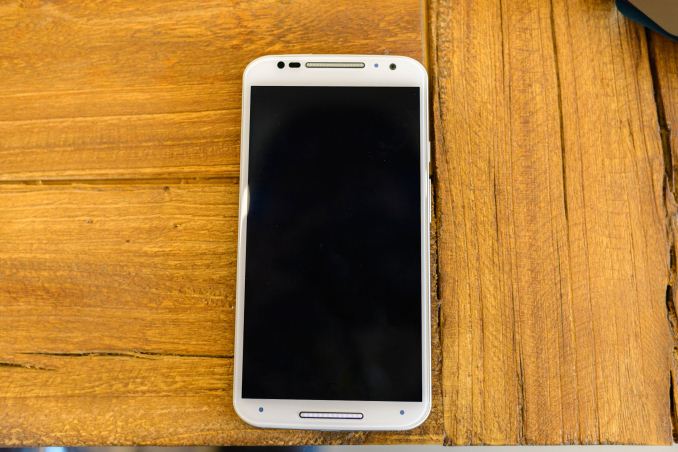 The back of the phone contains the customizable back cover, which can now be leather, wood, or various types of plastic. There are two visible mics on the top and back of the phone. However, the real design elements here are the dimple and camera. The new dimple seems to be larger than before, and also has a metal accent surrounding it, which makes it seem a bit button-like even though it isn’t a button. The rear camera is a bit unremarkable but the ring diffuser and two LED flashes makes for a distinctive look. In my hands-on time I found the leather to feel and smell authentic, although a few years of intensive use may make the latter a terrible idea. Motorola emphasized that the Horween leather was tanned in Chicago and that the colors were custom for Motorola. 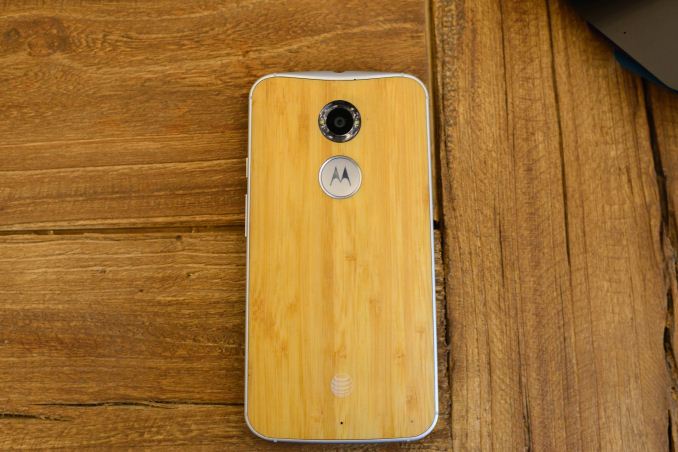 Overall, the industrial design and material design is a solid continuation of what we’ve seen of the Moto X. Motorola stated that this combined metal ring and plastic/wood/leather back made it possible to have both the premium feel of metal and the warmer feel of the customizable back. Of course, now that the basic hardware impressions are done it’s time to move on to the feature highlights of the new Moto X.