There are very few physical differences between the ORIGIN PC BlackWidow Chroma and the Razer BlackWidow Ultimate that we reviewed over a year ago. The only discernable difference is the color of the metallic support plate beneath the keys, which has been changed from green to white. Also, the only difference between the ORIGIN PC and the Razer version of the BlackWidow Chroma is the illuminated logo at the front of the keyboard, with each company using their own. Other than the different logo, both keyboards are identical in every respect.

Externally, the BlackWidow Chroma looks like a typical plastic keyboard with five macro keys installed on its left side. The top cover is sprayed with a fingerprint-resistance matte black paint that feels and performs admirably. There is no actual wrist rest and the slightly elongated plastic body of the keyboard does not really help in that fashion. There are no dedicated multimedia or special function keys on the BlackWidow Chroma. Advanced functions can be accessed by holding the FN button pressed and then pressing one of the function keys. For example FN + F11 lowers and FN + F12 increases the intensity of the backlighting respectively. 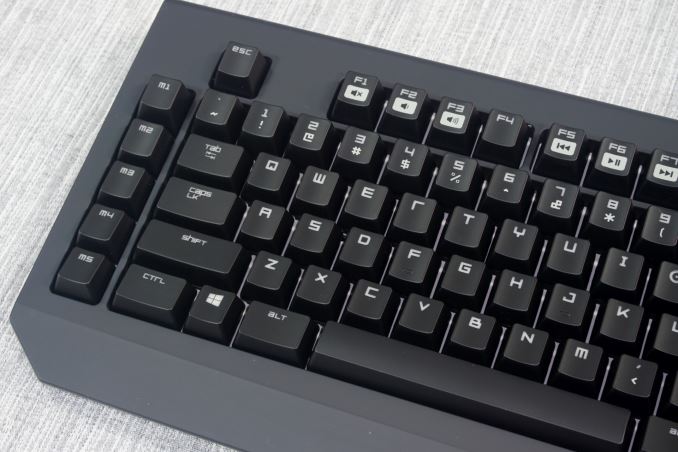 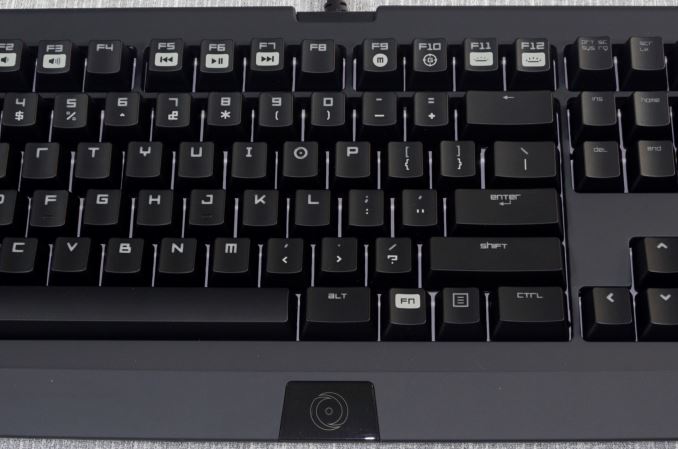 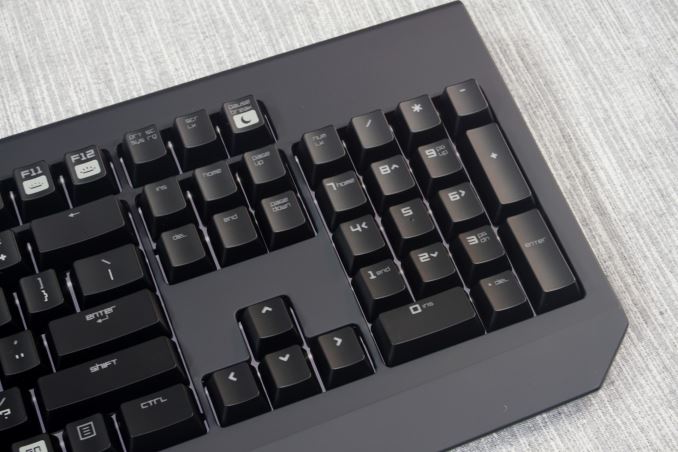 A USB port and headphone jacks can be found at the right side of the keyboard. With the exception of the thick braided cable exiting the chassis, there is nothing of particular interest on the back side of the BlackWidow Chroma. The thick cable ends to two USB connectors and two 3.5 mm jacks. Only one USB connector is required for the keyboard itself to operate. The second USB connector powers the pass-through USB port and, obviously, the two 3.5 mm jacks are also acting as pass-through connectors for the headphone jacks on the keyboard. 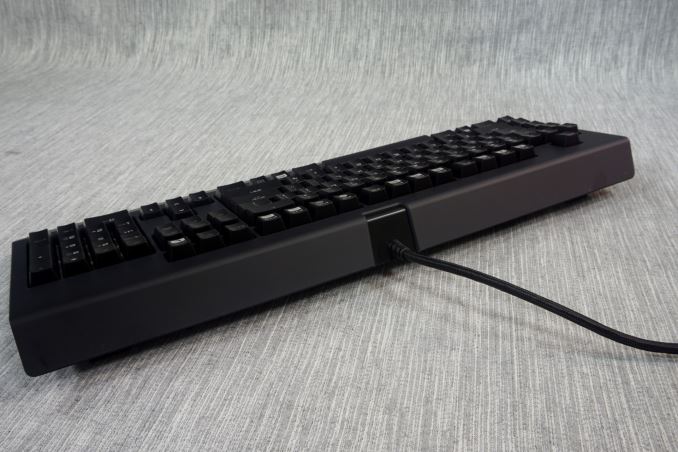 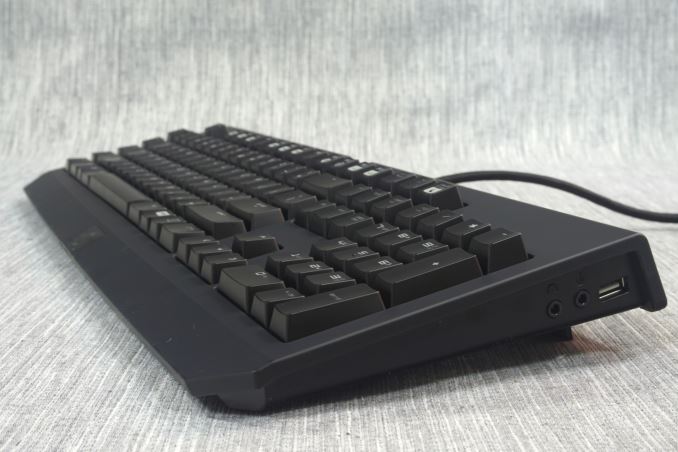 The keycaps are printed with large, futuristic characters. No extra keycaps are provided, with Razer using standard cylindrical keycaps. They appear to be made of transparent or semi-transparent plastic that has been painted afterwards. The smaller keys are very firm and robust, but the large keys wobble a little, even though the required actuation force feels uniform across the length of the key. This is greatly due to the use of stabilizer bars for the large keys, which do even the force but do little to prevent the keys from wobbling.

Beneath the keycaps, we found the Razer Green mechanical switches. Technically, Razer does not make switches of their own and these are products of Kaihua Electronics (also known as Kailh), the logo of which is printed on the keys. We had a thorough examination of Razer’s switches in our review of the BlackWidow Ultimate. For those that do not wish to delve into the details, it would suffice to say that Razer’s Green switches are practically identical to the Blue clicky tactile switch of either Cherry or Kailh. 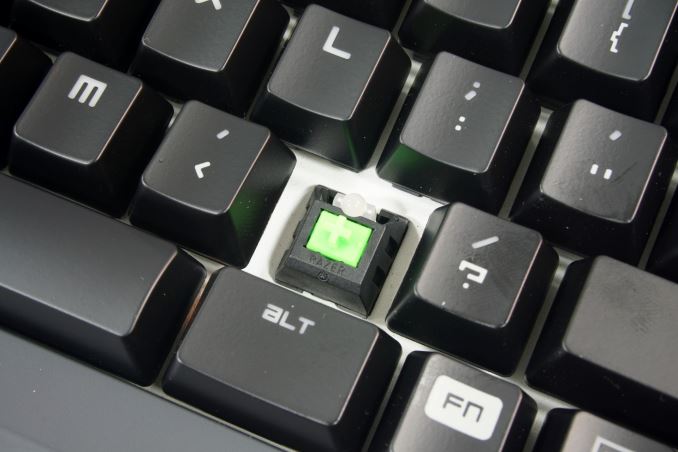 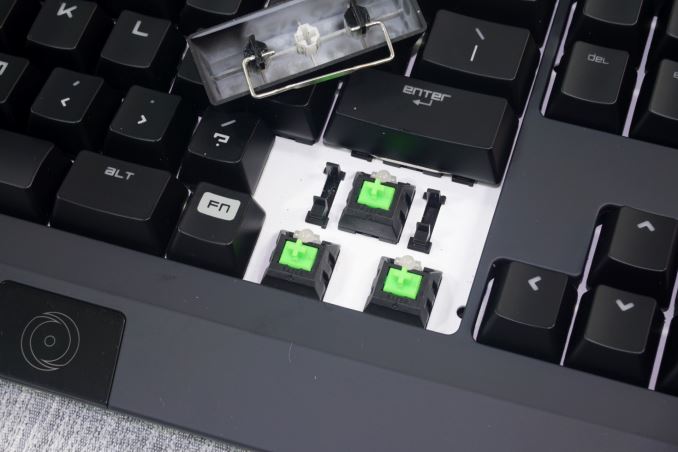 Unlike the Cherry MX approach that has the body of the switch being transparent to help distributing the lighting evenly around the key, Kailh is using old-fashioned "globe" LEDs at the top center of the switch. As such, the color projection is a lot stronger at the top half of the switch. This is not easily discernable if the entire keyboard is set to one color, but it becomes apparent if multiple colors are in use. In the extreme example of the picture below, the "R" and "Y" keys project their color on the F row while the lighting of adjacent keys is saturating the color on their sides and bottom. The "B" key is red but the lighting around it is partially purple and orange, affected by the adjacent violet and yellow keys. Within the areas that there is a single color for all keys, the lighting is uniform. 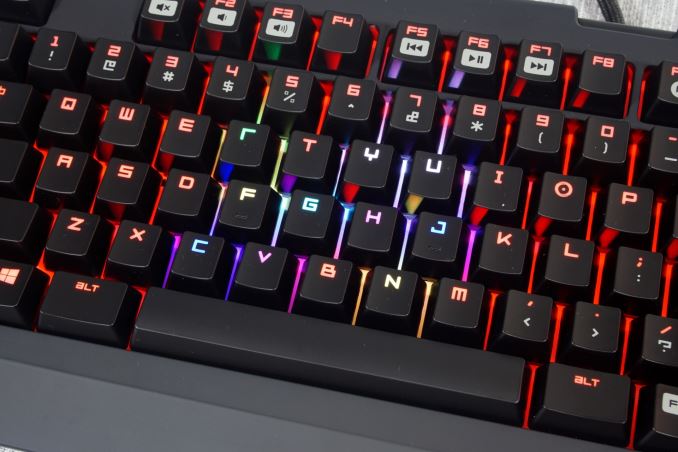 The removal of the plastic covers reveals the metallic support plate and the main PCB of the keyboard. We strongly recommend against the removal of the covers by any user, not only there is no reason for anybody but very experienced modders to remove the plastic covers, but also because the top plastic cover is made out of very brittle plastic and that is very easy to break if bent even a slightly bit. The assembly quality of the BlackWidow Chroma appears excellent, with the soldering job much improved since the last time we had a look at a BlackWidow keyboard. 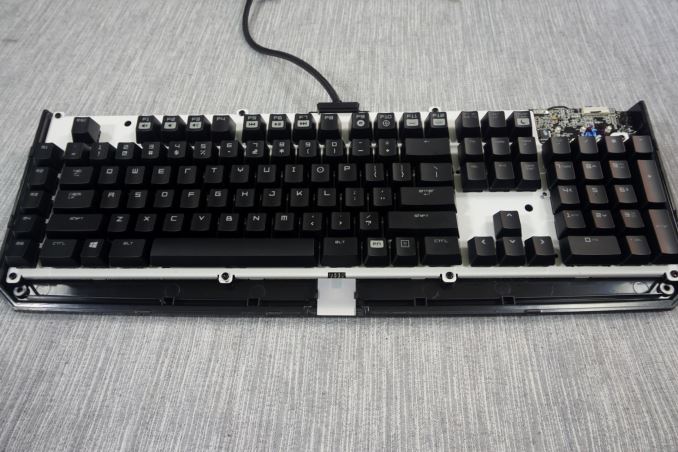 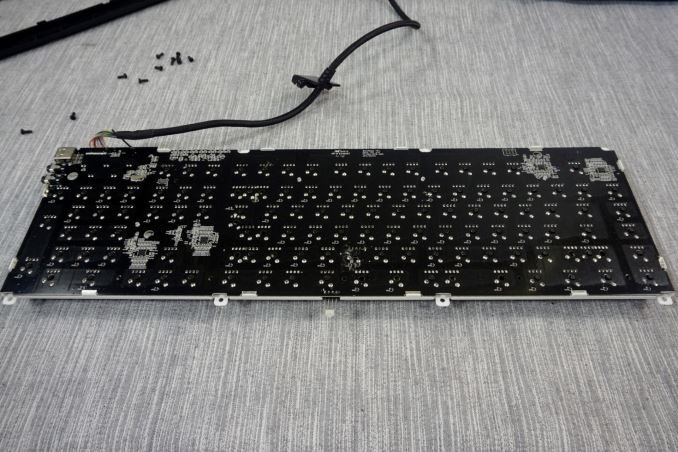 A NXP LCP11U24F 32 bit 50 MHz ARM Cortex M0 microcontroller is the main processor of the BlackWidow Chroma and four P3917 3731 LED microcontrollers are responsible for the LED lighting. While this chip is not lacking the processing power of the chips many competitors are currently using, it has very limited memory, equal to the amounts we are used to seeing in non-programmable (let alone RGB) keyboards. Nevertheless, for Razer to choose this particular microcontroller, it means that it should handle all tasks efficiently. 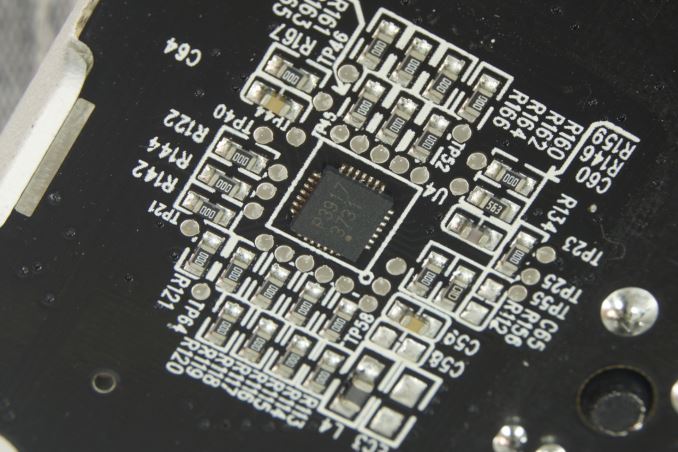