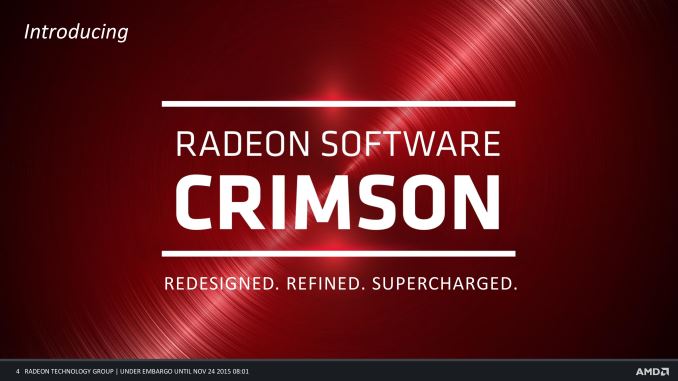 At the tail-end of 2014 AMD launched their Catalyst 14.12 driver set, better known as the Omega driver set. With Omega, AMD shifted their development process for the Catalyst driver set, focusing on delivering feature updates in fewer, larger updates while interim driver releases would focus on bug fixes, performance improvements, and adding new cards. The Omega release in turn was the first of these major releases, delivering a number of new features for Catalyst such as Virtual Super Resolution, preliminary support for FreeSync, and of course a number of performance improvements.

When briefing the press on Omega, one of AMD’s points was that if it was successful they were intending to make it a yearly release – in essence putting major feature updates on a yearly cadence – and after the reaction to Omega AMD has gone ahead and done just that. So launching today and serving as the cornerstone of AMD’s video driver plans for 2016 is this year’s major update, Radeon Software Crimson Edition. (Download)

AMD and the Radeon Technologies Group first announced their plans for Radeon Software Crimson Edition back at the start of the month, in a preview/teaser of what they were working on. AMD’s initial preview focused on the UI aspects of Crimson, namely the new control panel application, Radeon Settings. And while AMD’s preview actually covered Radeon Settings in a fair bit of depth, like all good previews AMD kept everything going on under the hood for Crimson equally under wraps. As a result we have quite a bit to discuss today, with Crimson rolling out with a number of bug fixes and feature additions on top of the control panel overhaul AMD originally announced.

But before diving into matters, let’s talk about AMD’s announced release schedule for Crimson going forward. Like Omega before it, Crimson is an annual release and a cornerstone for AMD’s driver plans for the next year. Along with renaming their driver stack from Catalyst to simply Radeon Software, the Crimson branding will be sticking with this release cycle. Come late 2016, for their next major feature update the Crimson branding will be replaced with another red-themed name.

Meanwhile one point of criticism towards AMD in 2015 has been the limited number of WHQL certified driver releases for the year. AMD had plenty of beta releases over the year – averaging once a month despite the fact that the company stopped adhering to a fixed monthly release schedule in 2012 – however they only released 3 WHQL certified releases. WHQL certification is in and of itself a thorny issue – it is an additional layer of quality assurance, which is good, but it doesn’t cover game-specific bugs, which are the bulk of the bugs most gamers are going to run into – so while it’s useful it alone won’t make a driver good or bad. None the less AMD will be addressing the lack of WHQL certified releases for 2016. 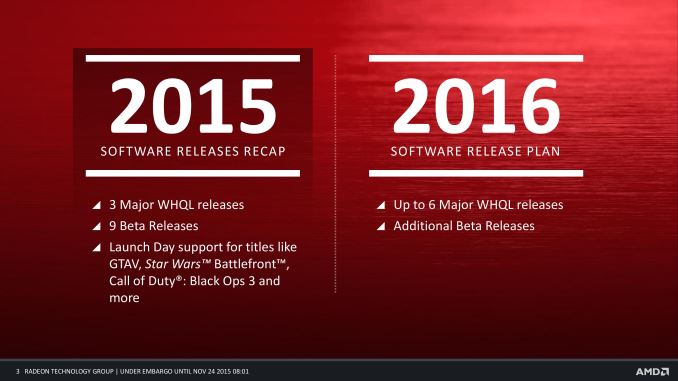 AMD’s plans call for up to 6 driver releases to be WHQL certified next year, with additional beta releases as necessary as AMD already does today. Frankly the “up to” designation leaves AMD quite a bit of wiggle room in case they fall short, so it’s not a very solid promise. But on the other hand it’s legitimately difficult to plan for a specific number of WHQL releases a year in advance – one can’t predict bugs – so AMD does need some wiggle room in case they can’t meet that schedule. That said, if AMD wants to seriously address the complaints about the lack of WHQL releases in 2015 and retain their integrity, then they need to deliver on those 6 releases for 2016.

Speaking of quality assurance, AMD tells us that they have once again increased their QA testing, and stability is a top focus for 2016. With the Omega driver AMD ramped up both their automated and human testing to cover more test cases and system configurations, and for Crimson AMD has done this again. 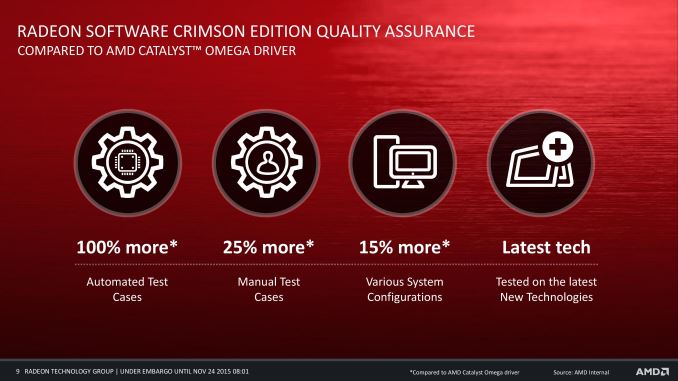 As drivers approach (and in some cases exceed) the complexity of an operating system, comprehensive driver QA becomes increasingly invaluable, and Windows 10’s aggressive driver update mechanism will bring driver quality to the forefront. So although AMD has never not focused on driver quality and stability, there is always room for improvement. And particularly in AMD’s case, some of the Catalyst releases have shipped with some major issues despite AMD’s QA process improvements for Omega – the web browser memory leak comes to mind – so AMD definitely needs to improve their processes to prevent future issues. 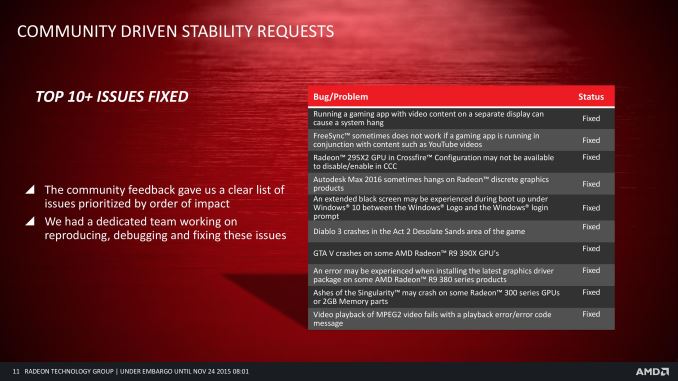 As for Crimson in particular, AMD notes that they have knocked out a large number of bugs. AMD also notes that a number of these bugs came in and/or were prioritized via user feedback, so they’re asking that we remind everyone that AMD has a bug reporting form and that they’re encouraging anyone experiencing a driver bug to use it.