As I mentioned earlier, the technology at the heart of the Philips 276E6 monitor is QD Vision's Color IQ quantum dot technology. To gain a better understanding of how this differs from other quantum dot implementations currently used in the market, I spoke with QD Vision's Chief Marketing Officer John Volkmann.

Quantum dots are a type of semiconducting nanocrystal. They're typically made of cadmium selenide or indium phosphide, and when used in displays they have a diameter less than ten nanometers. What makes them interesting is that they exhibit a property known as photoluminescence, which means that they emit light after absorbing photons.

In LCD displays this property is highly desirable, as it means that you're able to place an array of quantum dots between the backlight and the color filters to reduce the frequency of the light emitted by the blue backlighting. By altering the diameter of the quantum dots you can control the frequency and wavelength of the light that is emitted, which allows for the emission of specific red, blue, and green wavelengths at the required intensity to cover your target color gamut. Smaller quantum dots on the scale of one or two nanometers emit wavelengths of light in the blue part of the visible spectrum, while larger quantum dots with a diameter of six or seven nanometers emit red light. 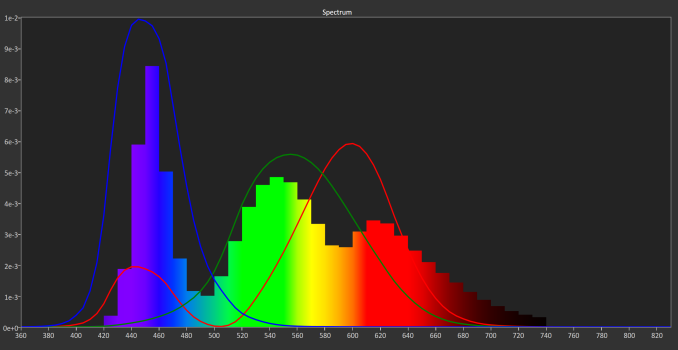 A question you may have is why this is actually necessary. I mentioned above that quantum dots are typically used to convert blue light into red and green light, and the use of blue LEDs for backlighting is not unique to quantum dot displays. Almost all modern LCD displays use LED backlighting, and the majority of them use what is commonly referred to as WLED backlighting. In truth, these "white" LEDs are really blue LEDs paired with a yellow phosphor, and through this process wavelengths of blue, green, and red light are produced. Unfortunately, there is still a very significant blue bias in the final output, and the intensity of the desired red and green wavelengths is relatively low. Because of this, these displays are limited in the range of green and red colors they can reproduce, and to date most monitors of this type have been limited to roughly 99% of the sRGB color gamut.

To produce a wider color gamut with LED backlights alone, vendors have employed the use of different technologies. The most prominent is GB-r backlighting, which pairs green and blue LEDs with a red phosphor to allow for green and red light of a greater intensity. Unfortunately, such designs have shown to be quite expensive, and this has kept wide gamut displays priced well outside what is affordable for the average consumer. An even smaller group of displays has employed full RGB backlighting, but due to cost this did not see much adoption by any display vendor.

The cost-related issues of RGB and GB-r backlighting is the problem that QD Vision hopes to solve with their Color IQ technology. Color IQ's appeal is that it works with standard edge-lit displays, and it takes advantage of the blue LED backlighting that those displays employ. Most quantum dot technologies require the use of expensive full-array backlighting because they use a thin film layer with quantum dots embedded throughout it which sits between the backlighting array and the color filter layer. In contrast, Color IQ uses small glass cylinders that sit in front of the blue LEDs at the edge of the display. According to QD Vision, the cost of a film-based solution for a display around the size of a 50" television can cost around $100, while their quantum dot solution for edge-lit displays will only cost around $20. 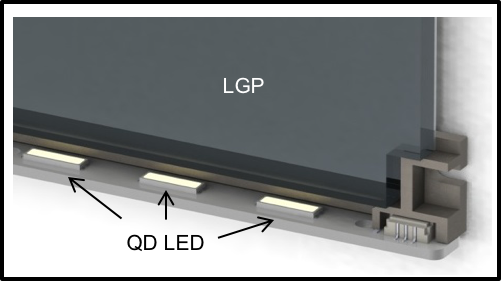 With QD Vision's current technology the cylinders with quantum dots sit between the blue LEDs and the light guide plate that distributes the light across the panel. With such an implementation one can expect displays that closely cover the Adobe RGB and DCI-P3 color gamuts depending on exactly how the quantum dots are tuned. According to QD Vision, quantum dot technologies perform best when the quantum dot array is as close to the backlight as possible. Within the next few years they hope to be able to deliver a "chiplet" solution, which consists of a quantum dot matrix mounted in a bead of glass right atop the LEDs. Moving beyond that will be integrating the quantum dot matrix right into the LEDs themselves. Right now such solutions are infeasible due to heat degradation, but they will be necessary as we move toward full coverage of the Rec. 2020 color gamut.