Of course, while QD Vision's Color IQ technology looks good on paper, what's equally important is how well the technology translates to the real world. QD Vision's goal to bring down the cost of backlighting suitable for wide gamut displays is unabashedly aggressive, and like other efforts to reduce manufacturing costs, cost reductions need to be carefully balanced to exploit the advantages of new technology without unnecessarily sacrificing quality. To that end QD Vision's first outing in the PC display market is an especially interesting one, as we can see and evaluate first-hand the true gamut capabilities of Color IQ as implemented in Phillips' 276E6 monitor.

Starting things off with a look at some more basic monitor metrics, Philips rates the 276E6 as having a peak brightness of 300 nits and a contrast ratio of 1000:1. This is in line with what you'll typically find on displays of this price, and in general you probably won't be using a monitor at anything close to 300 nits in a typical workspace. As always, measurements for white and black level are done with an i1DisplayPro due to its greater accuracy with levels below 0.2 nits than the i1Pro 2. 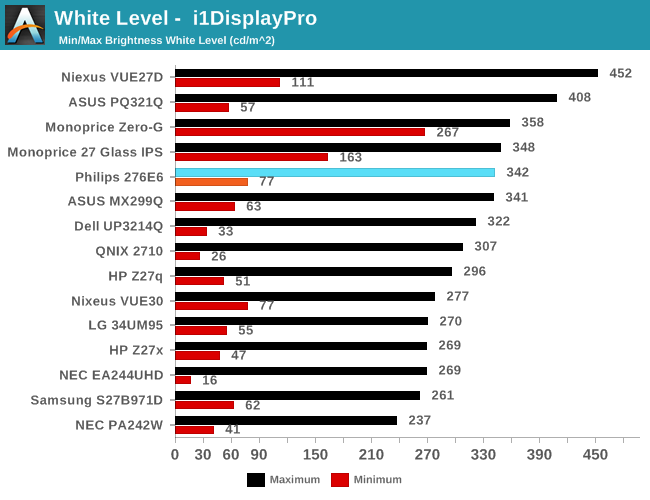 Peak luminance on the Philips 276E6 is relatively high. While we have seen some monitors reach beyond 400 nits, in practice this isn't really important because the ambient environment lighting for a monitor is usually constant, and rarely requires a brightness above 100-200 nits to overcome reflections. As for the minimum brightness, in its standard Adobe RGB mode the display dropped to 77 nits. This is actually fairly bright, and if were any brighter it would be difficult to perform our 80 nit calibration later in the review. 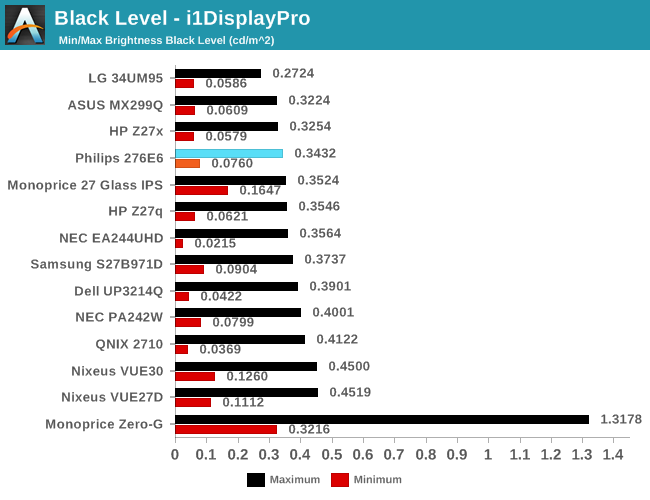 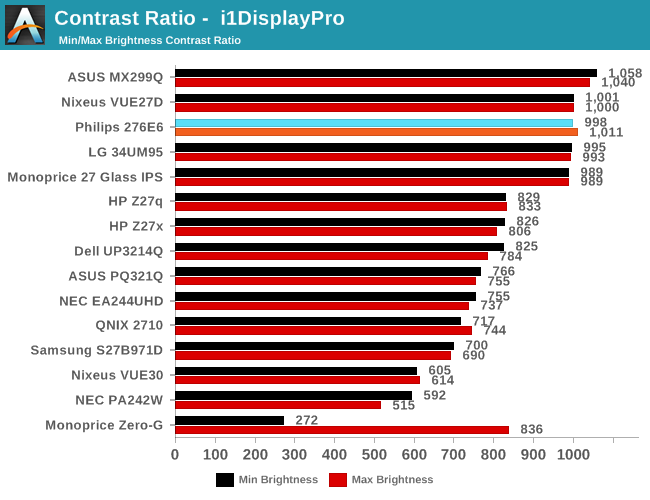 As far as contrast ratio goes, the Philips 276E6 does as well as you'd expect based on its white and black levels. Obviously there are now displays on the market that utilize photoalignment technology to achieve contrast ratios around 1800:1, but 1000:1 is quite a good result for a $300 display, and it's right in line with what Philips advertises so you're definitely getting what you paid for.

Gamut accuracy on the Philips 276E6 can vary pretty wildly. On both of the units I tested there were two common errors. The first is color, with the blue primary being undersaturated while the red primary is significantly oversaturated. The second problem is the white point. If your luminance is wrong your colors will also be wrong, and on both monitors it took a lot of fiddling with the OSD to get an accurate white point, and you can see the result of that in the photos above. Out of the box the white error on our second unit causes the DeltaE to approach four.

Generally, you'll be able to eyeball it and figure out which of the white presets is the most neutral, but even if you do you're also dealing with significant errors in blue, red, and the secondary colors that rely on them. Considering that the Color IQ tech is supposed to be highly tunable I really don't know how such large errors could exist in the shipping product, and it's not clear whether this is a technology limitation or a decision on Philips' part. In any case it doesn't look good to have large errors on the most basic of our tests.