The primary purpose of the My Passport Wireless Pro device is to act as a storage extension for mobile devices. Connecting the device to a 'Home Network' SSID also exposes up to three folders as CIFS shares, Storage, SD and USB. The availability of the last two are dependent on the presence of a SD card and/or USB drive. Data can be transferred between a PC and the device via these CIFS shares. That said, the My Passport Wireless Pro also doubles up as a high-speed portable hard drive (with support for WD's custom utilities such as WD Backup). The internal disk is pre-formatted in exFAT in order to be compatible with multiple operating systems. Transfer of large-sized media collections / libraries and periodic computer backups are best done through the USB 3.0 interface and not via Wi-Fi. In order to evaluate this aspect of the My Passport Wireless Pro, we utilized the testbed outlined in the table below to test the DAS performance. The USB 3.1 Gen 2 port enabled by the Intel Alpine Ridge ontroller was used to benchmark the unit..

Our testing methodology for DAS units takes into consideration the usual use-case for such devices. The most common usage scenario is transfer of large amounts of photos and videos to and from the unit. The other usage scenario is importing files directly off the DAS into a multimedia editing program such as Adobe Photoshop. Prior to taking a look at the real-life benchmarks, we first check what ATTO and CrystalDiskMark have to report for the My Passport Wireless Pro. We see steady numbers around 110 MBps for sequential transfers, correlating well with WD's performance claims. 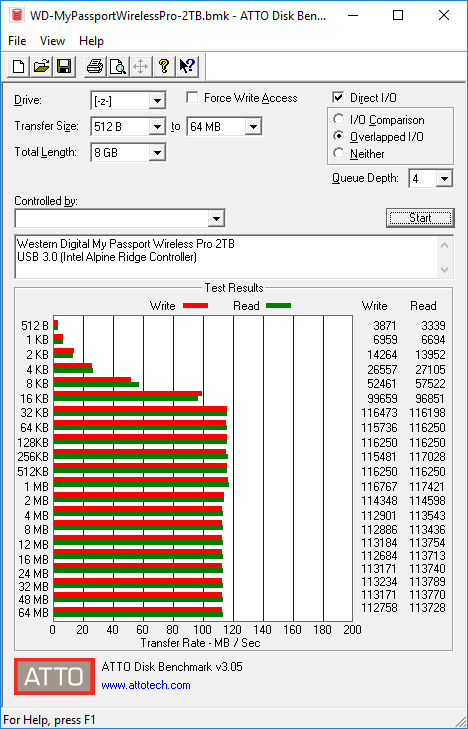 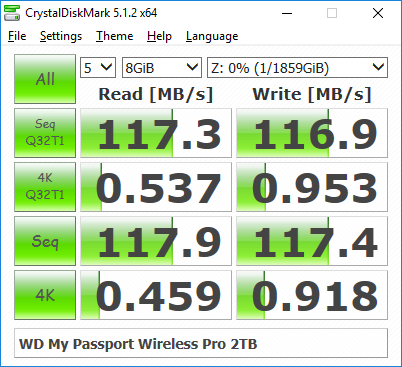 In order to tackle the first real-life use-case, we created three test folders with the following characteristics:

For the second use-case, we take advantage of PC Mark 8's storage bench. The storage workload involves games as well as multimedia editing applications. The command line version allows us to cherry-pick storage traces to run on a target drive. We chose the following traces.

Usually, PC Mark 8 reports time to complete the trace, but the detailed log report has the read and write bandwidth figures which we present in our performance graphs. Note that the bandwidth number reported in the results don't involve idle time compression. 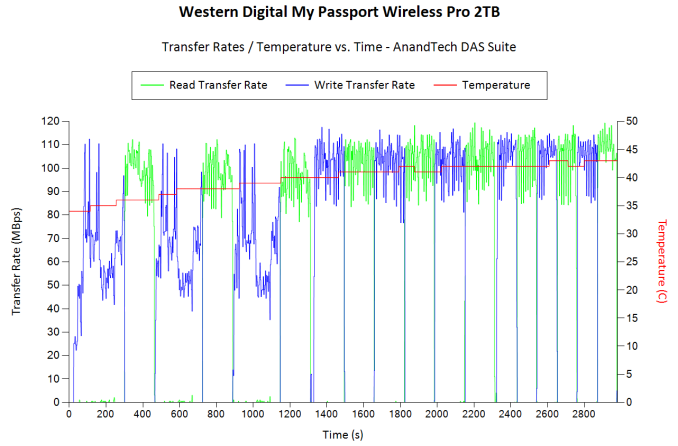 The drive doesn't go beyond 45C even after ore than 250GB of continuous transfers. There is no thermal throttling or overheating in the system under heavy loading conditions.