Tesoro usually creates graphically fancy software packages, even if the user interface is simple and the options limited. This time Tesoro decided to go with a clean, simplistic design, but the software remains relatively unsophisticated for a keyboard of this class. It is however very easy to learn and use, with every option and setting cleanly arranged on a single screen. 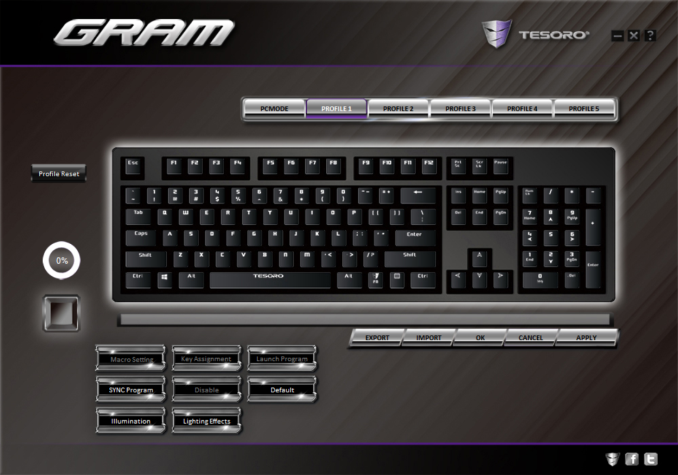 At the top right side of the UI, the user can select between the “PC Mode” and any of the five programmable profiles. The PC Mode is the basic keyboard mode that disables all advanced functions and has the Gram Spectrum behaving like any ordinary keyboard. Each of the five profiles can be “Synced”, that is linked to a specific application, automatically engaging when the application starts. 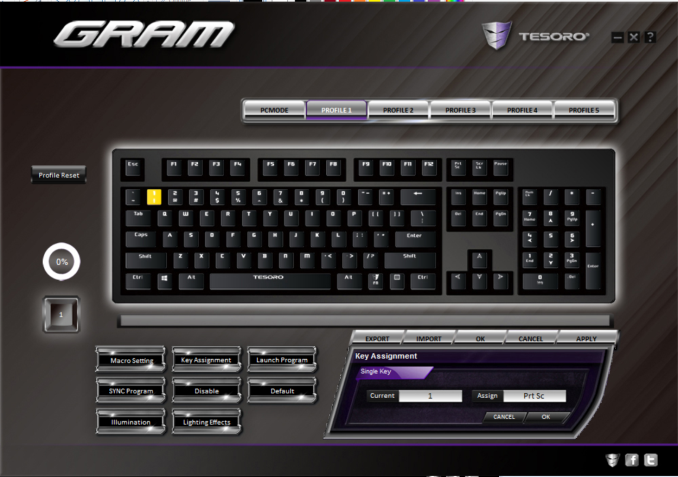 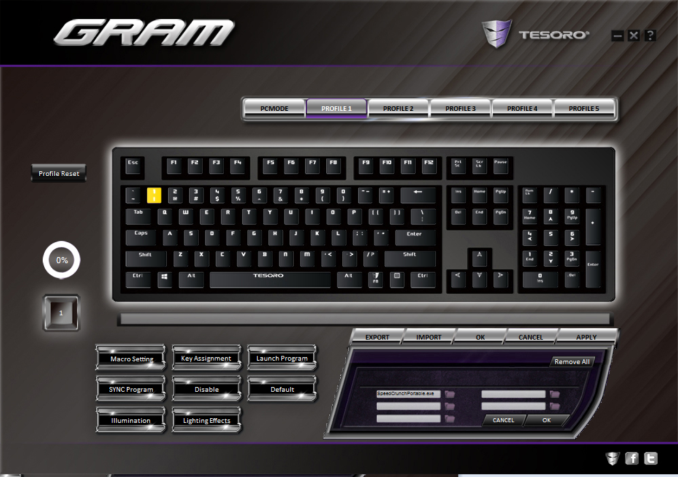 The Tesoro Gram Spectrum is a fully programmable keyboard, allowing the user to freely disable or reprogram any of its keys. It is possible to either re-map a key, to launch applications with it or to perform a macro that has been programmed using the software. The macro recorder however is rather basic. Macro recording is initiated by clicking the "Start Record" button, all key presses with their time delays will be recorded, and then it will stop once the "Stop Record" button is clicked. The time delays and the sequence can be edited, as well as new key presses can be inserted into an existing macro. It is also possible to set the macro to repeat a finite number of times, as long as the key is being held pressed or until it is pressed again. However, the recorder is unable to record anything beyond keyboard keystrokes, such as mouse movements and clicks. 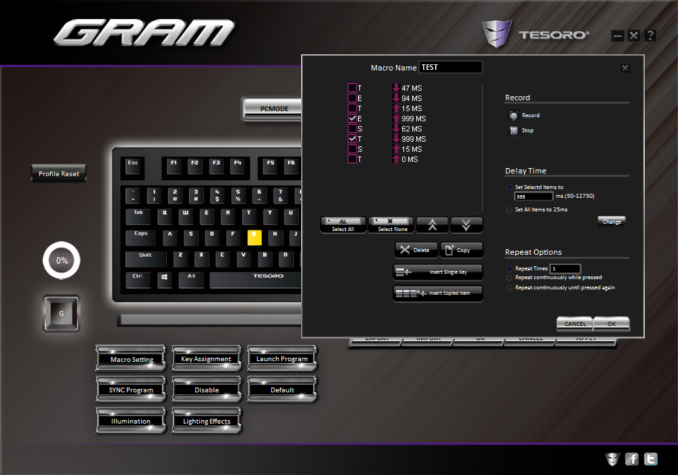 The illumination button brings out a menu of nine basic colors, plus a palette with any possible RGB color. The palette is very small and seems difficult to select an exact color, but the software also allows manual input of the RGB code of the color, allowing for precise fine tuning. Special effects can also be selected for the entire keyboard, such as a rainbow wave and “breathing” brightness effects. 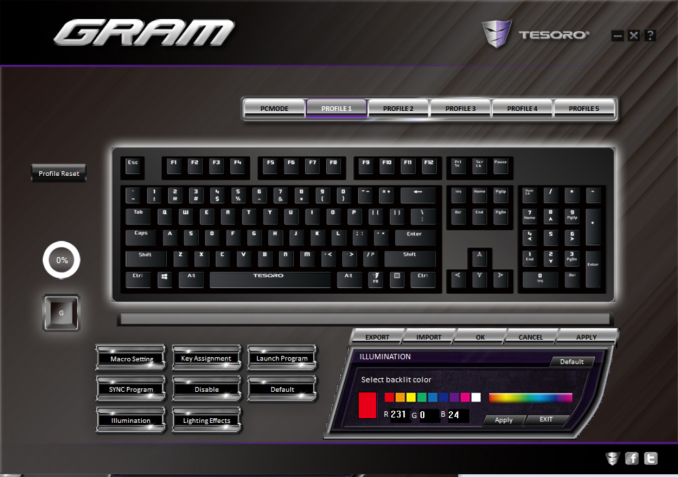 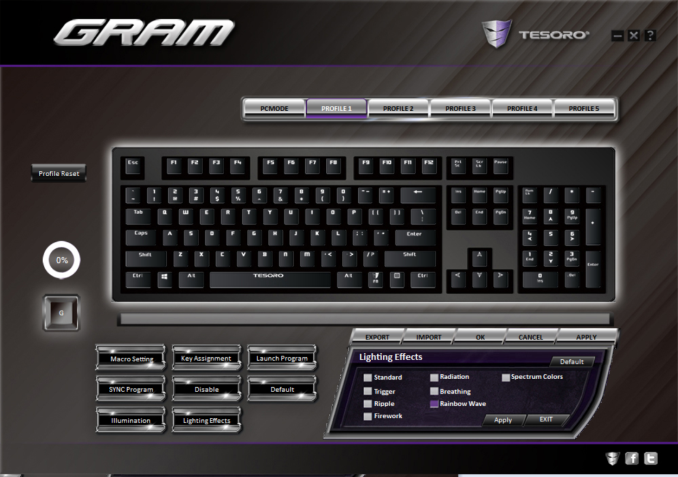 In order to test the quality and consistency of a keyboard, we are using a texture analyser that is programmed to measure and display the actuation force of the standard keyboard keys. By measuring the actuation force of every key, the quality and consistency of the keyboard can be quantified. It can also reveal design issues, such as the larger keys being far softer to press than the main keys of the keyboard. The actuation force is measured in Centinewton (cN). Some companies use another figure, gram-force (gf). The conversion formula is 1 cN = 1.02 gf (i.e. they are about the same). A high quality keyboard should be as consistent as possible, with an average actuation force as near to the manufacturer's specs as possible and a disparity of less than ±10%. Greater differences are likely to be perceptible by users. It is worth noting that there is typically variance among keyboards, although most keyboard companies will try and maintain consistency - as with other reviews, we're testing our sample only.

The machine we use for our testing is accurate enough to provide readings with a resolution of 0.1 cN. For wider keys (e.g. Enter, Space Bar, etc.), the measurement is taking place at the center of the key, right above the switch. Note that large keys generally have a lower actuation force even if the actuation point is at the dead center of the key. This is natural, as the size and weight of the keycap reduces the required actuation force. For this reason, we do display the force required to actuate every key but we only use the results of the typical sized keys for our consistency calculations. Still, very low figures on medium sized keys, such as the Shift and Enter keys reveal design issues and can easily be perceptible by the user.

We were curious to see how the new, shortened “Agile” switches would perform and their quality proved to be satisfactory. The switches are significantly heavier than their normal Blue counterparts, though we should note that Tesoro does not claim that these switches should share the performance of the typical Blue switch. As the spring of the switches appears to be of the same size and type as that we found in Blue switches, the shortened stem probably “pre-loads” the spring, stiffening the remainder of its travel. We measured an average actuation force of 52.3 cN with a disparity of ±8.54% across the main keys, a relatively high but reasonable figure.