In terms of aesthetics, the G910 Orion Spectrum is based on a modern design, with futuristic curves and rounded cutouts. Considering its purpose and target market, we feel that it has an excellent balance between elegance and extravagance. However, the excessive use of plastic is not going to be very pleasing for those seeking a premium look, especially when most top-tier keyboards are metallic nowadays. Nevertheless, the plastics of the G910 Orion Spectrum are of excellent quality and thus metal would only offer an aesthetic advantage. 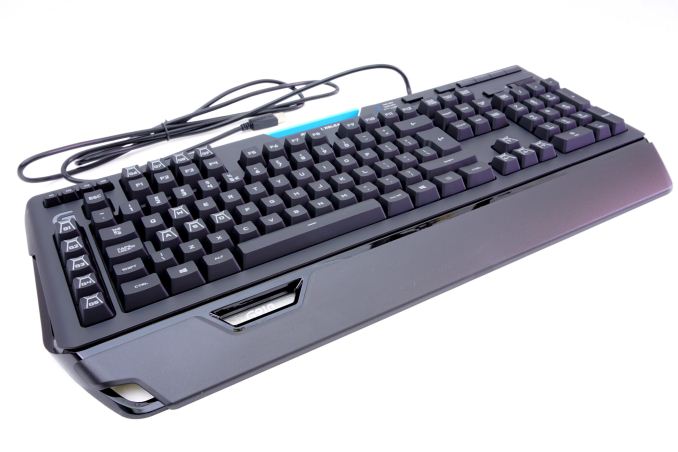 We received the US/International version of the keyboard, or at least that is what the box said. The layout of the actual keyboard however was different, looking like a mix of an ISO 105 key layout with ANSI keycaps. As ISO layout has one key more than ANSI; one keycap repeats itself next to the Enter and to the left Shift key. Though it should be noted that on Logitech's website, the default model shown is a full 104-key ANSI layout, so it appears that regardless of the product labeling, they are producing both ISO and ANSI versions.

One of the major upgrades in comparison to G910 Orion Spark are the new keycaps. On the Spark, the keycaps received numerous complaints for having peculiar keycaps with sharply rising edges. The keycaps of the G910 Orion Spectrum on the other hand are cylindrical, and they are made from ABS plastic and have bold characters printed right in the middle.  The extra G keys and eight of the main keys (WASD and the arrow keys) have a pattern printed on them but they still are cylindrical like every other key. Do note however that the company does not supply normal replacements for the WASD and arrow keys, so users will be stuck with them visually standing out regardless whether it is convenient for them or not. 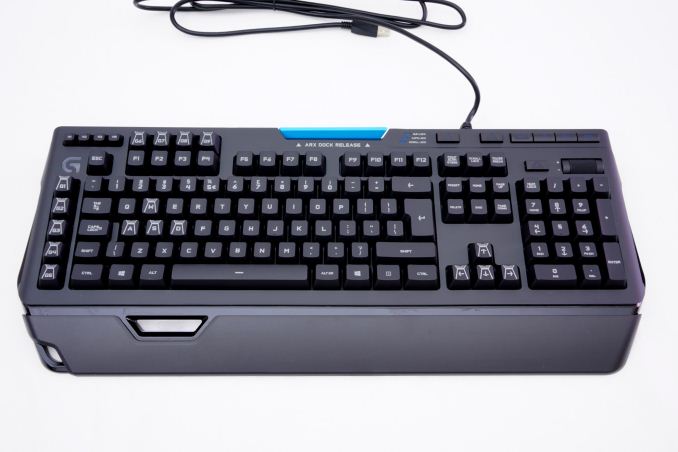 Moving on, low profile, rectangular buttons and a plastic wide wheel have been installed for basic multimedia control. The wheel naturally controls the volume and a rectangular flat button next to it mutes the volume. Four rounded rectangular buttons above the volume control wheel provide basic media functions, with the Play/Pause key having a flattened top for tactile feedback. There are two more rectangular buttons towards the center of the keyboard, one for turning on or off the lighting and one for entering the “game mode” that locks certain keys (by default, the Windows keys only). The lighting button has no brightness settings; it only turns the lighting entirely off. Brightness and effects are only programmable via the company’s software. 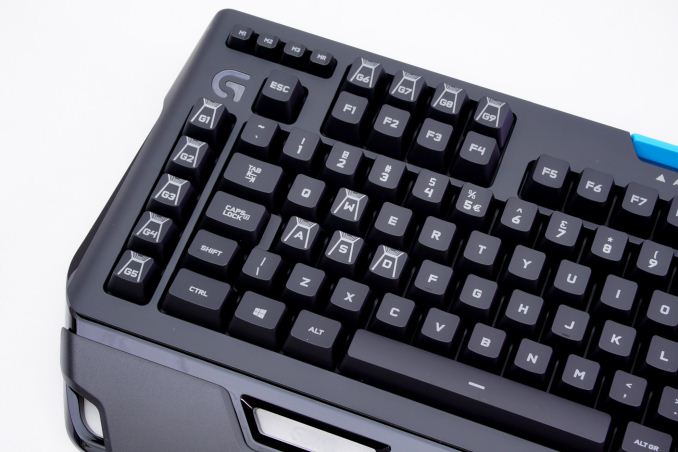 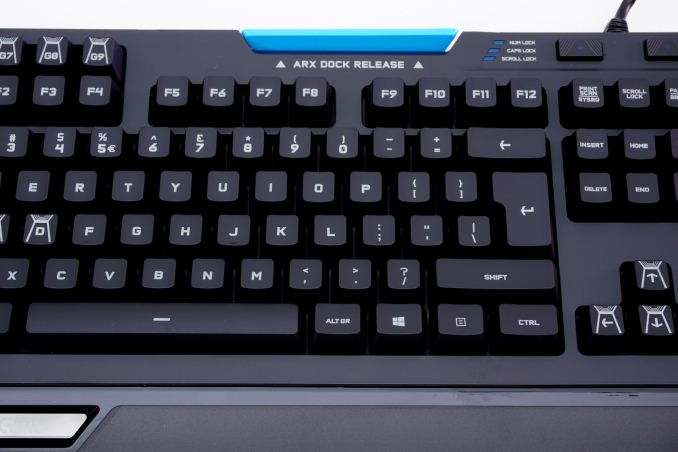 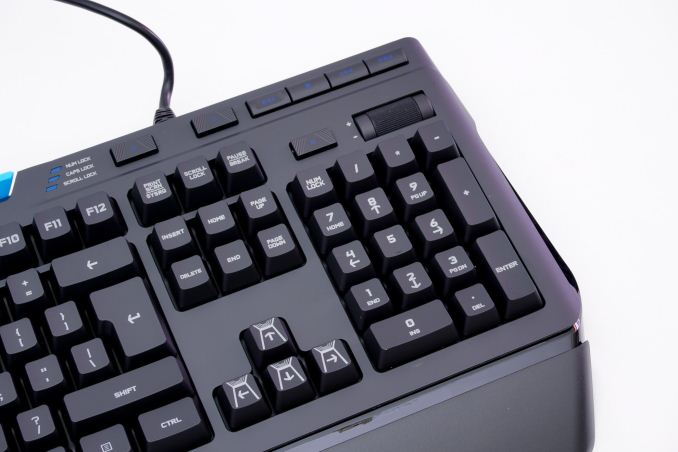 When pulled out, the ARX dock functions as a holder for virtually any smartphone or tablet. The word “dock” is probably a little misleading, as the touchscreen device will not actually connect with the keyboard directly but wirelessly, via Logitech’s software and Android/iOS application. The blue plastic is actually nothing more than a holder. 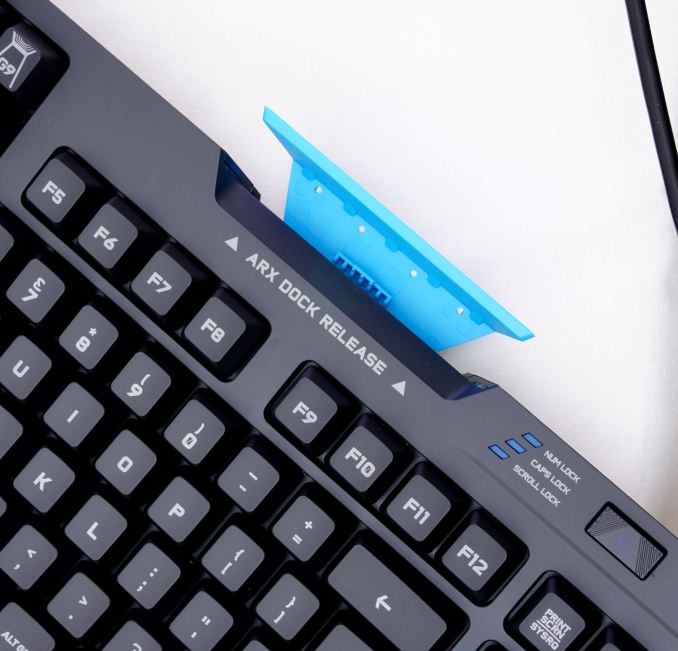 Smartphones with 5” to 5.5” screens are an excellent fit (the 5” Lenovo Vibe Shot Z90 is being used in our pictures as a reference). It would be nice if Logitech had considered the ability to at least charge the device - as its battery drain from having its screen constantly on will be humongous - though admittedly an effective universal charging solution would likely be more trouble than it's worth. 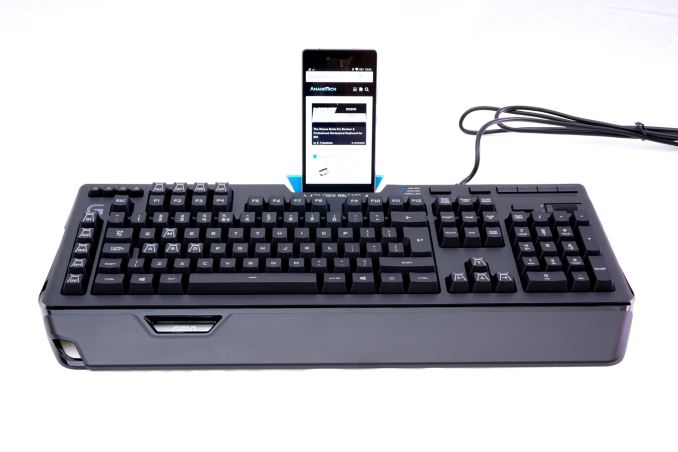 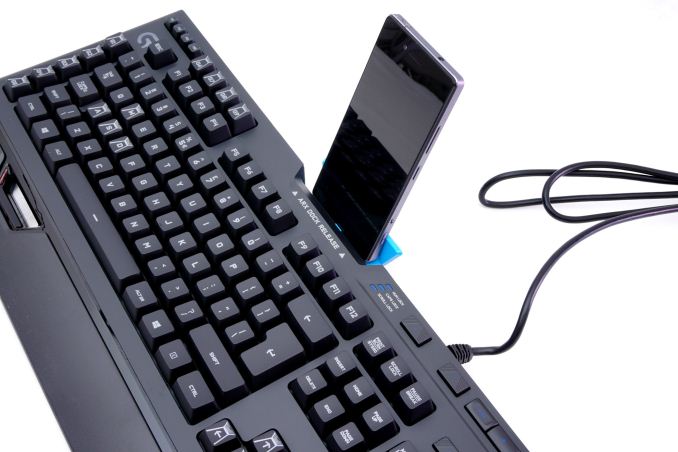 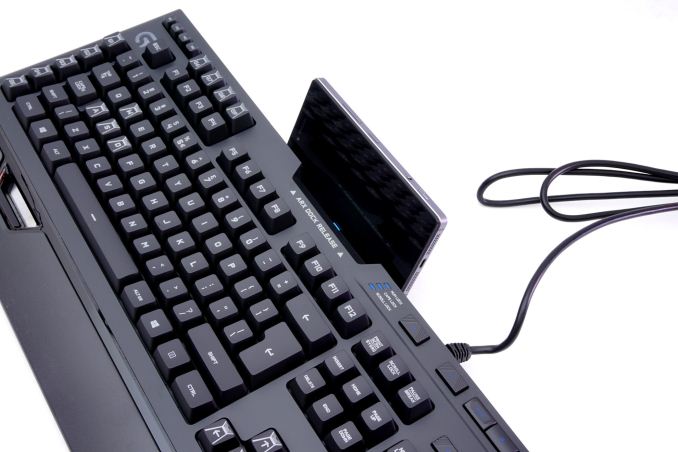 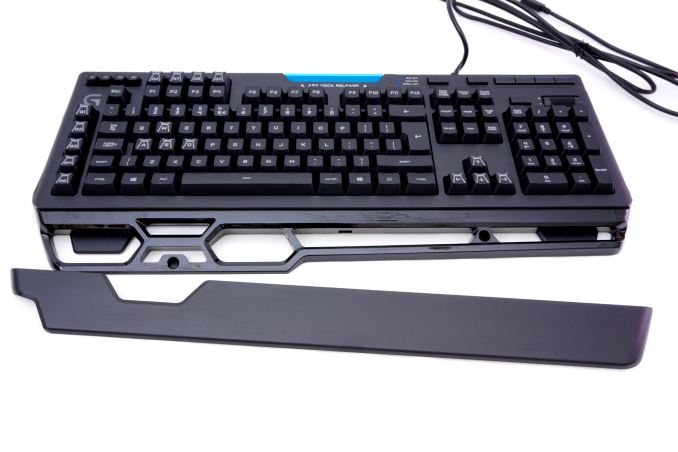 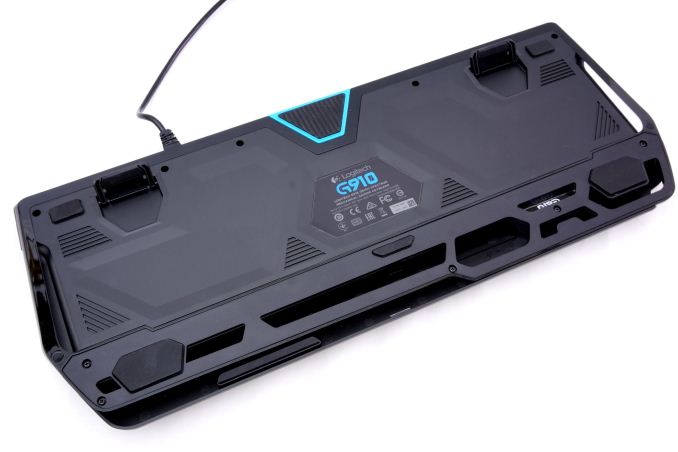 The mechanical switches of the G910 Orion Spectrum are Logitech’s exclusive Romer-G switches. These are made by Omron and Logitech has designed them specifically with gaming in mind. They are tactile, quiet and have an actuation force of 45g. Some compare them with Cherry’s MX Brown switches, but that is highly inaccurate, as the Romer-G switch has a much softer tactile bump and much shorter travel and actuation distances, at 3 mm and 1.5 mm respectively. The LED are installed at the center of the switch, providing excellent lighting to the inside of the keycap and minimizing light leakage around it. Cherry MX cross-type supports have been installed beneath the larger keys. The Romer-G switches however are entirely incompatible with keycaps that have been designed for keyboards with Cherry MX or compatible switches. Practically, the only source for keycaps compatible with the Romer-G switch currently is Logitech. 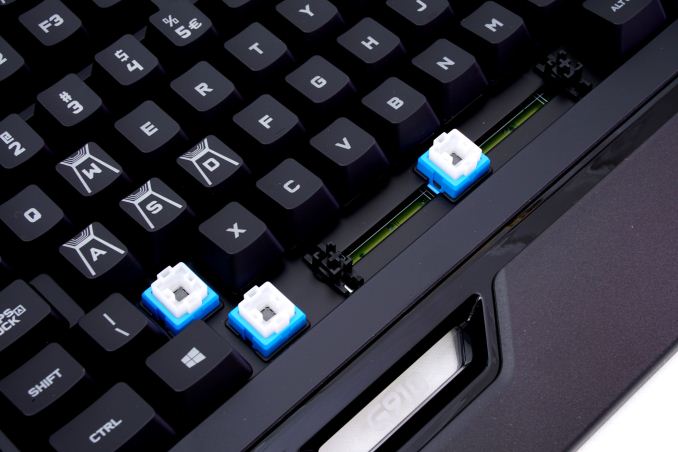 The removal of the top plastic cover reveals the metallic plate that is responsible for the keyboard’s high mechanical strength. The switches are permanently attached to the plate and soldered to the PCB below. Membrane electronic contacts are being used for the smaller buttons. Logitech’s assembly quality is excellent, with no flaws or weak spots that we could identify. 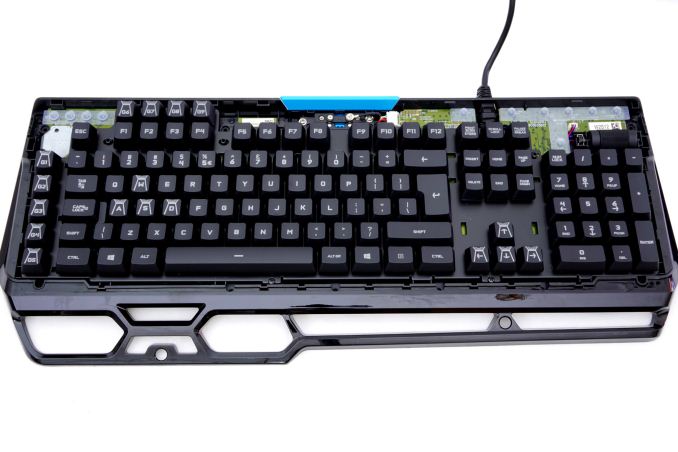 Most enthusiasts would be amazed to find out that the heart of the Logitech’s flagship is a low-cost ARM processor from ST Microelectronics. The STM32L100-R8T6 is a low power, low frequency 32MHz RISC CPU with 64Kb of flash memory. It might seem to be very weak compared to what the competition is using but it actually is more than enough for the G910 Orion Spectrum, as the keyboard actually is not fully programmable. As we will also see in the following pages, only the extra G keys of the keyboard are programmable. 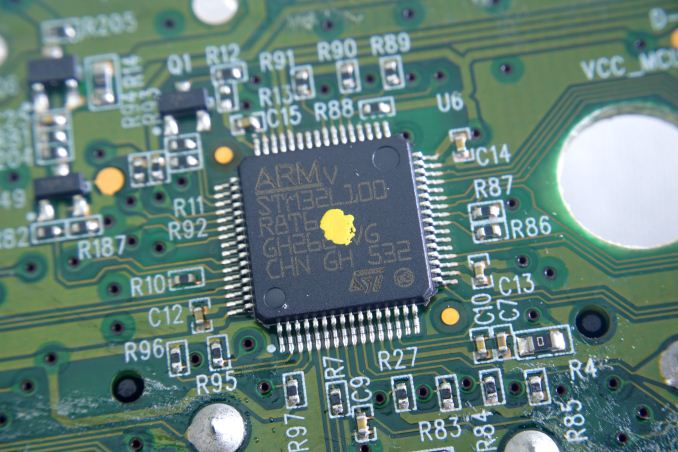 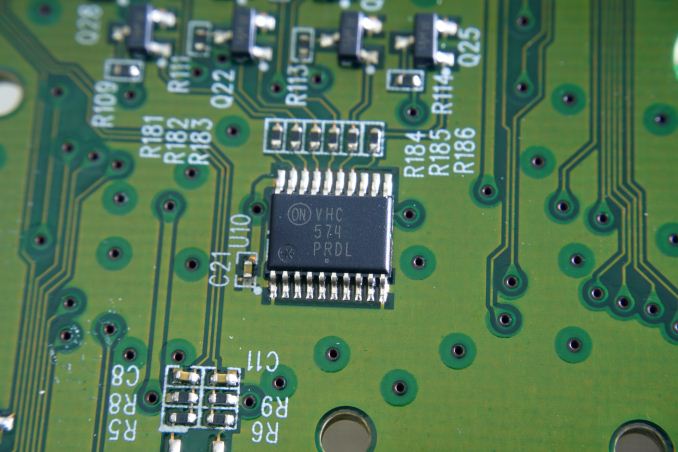