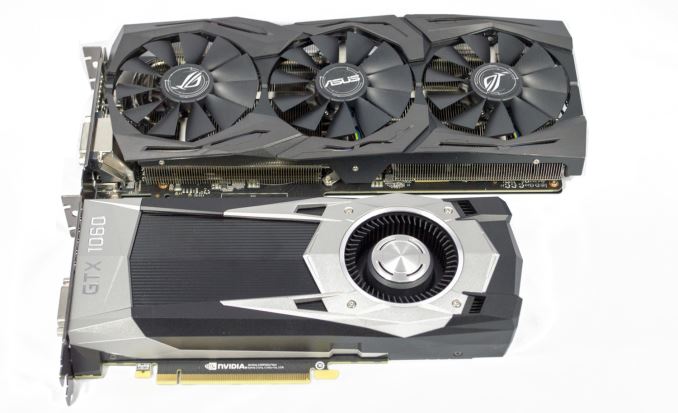 Back at a trade show some time ago, I once had a reader ask me what the most important price tier was for our video card reviews. Was it the high-end cards with their groundbreaking performance? Or was it the mainstream cards, which bring existing performance down to cheaper prices?

For the mainstream market then, a traditional NVIDIA top-to-bottom launch is both exciting and trying. Exciting because you get a sneak peek at what’s coming down the pipe in a couple of months, and trying because who doesn’t want a new video card right this second? Ultimately for NVIDIA’s largest market by volume, it means there’s a bit of a wait.

But after that wait, here we are: GP106, the heart of the GeForce GTX 1060. Announced in early July, NVIDIA’s mainstream/enthusiast GPU is part of a quick succession of Pascal releases for the company, who has now released (in various fashions) 4 different Pascal GPUs. Of the Pascal family so far, GP106 is the smallest, and the cheapest. But for NVIDIA’s customers it may very well be the most important, as GTX 1060 significantly raises the performance bar for 1080p gaming.

We’ll start things off as always with the specifications. GeForce GTX 1060 ships with a fully enabled GP106 GPU, so right off the bat we’re seeing the full capabilities of NVIDIA’s mainstream GPU. A full GP106 (and consequently GTX 1060) ships with 1280 CUDA cores, which is half the number found on GTX 1080/GP104. Similarly, this means we’re looking at half the texture units, and half of the polymorph geometry engines.

However on the backend of the rendering pipeline, things are a bit more interesting NVIDIA deviates a bit from tradition, and a bit from making GP106 a true halving of GP104. Whereas you’d expect half of a GP104 to ship with 4 ROP/L2/MC partitions – for a total of 32 ROPs and a 128-bit memory bus – instead we get a 6 partition setup, only 2 partitions shy of GP104. 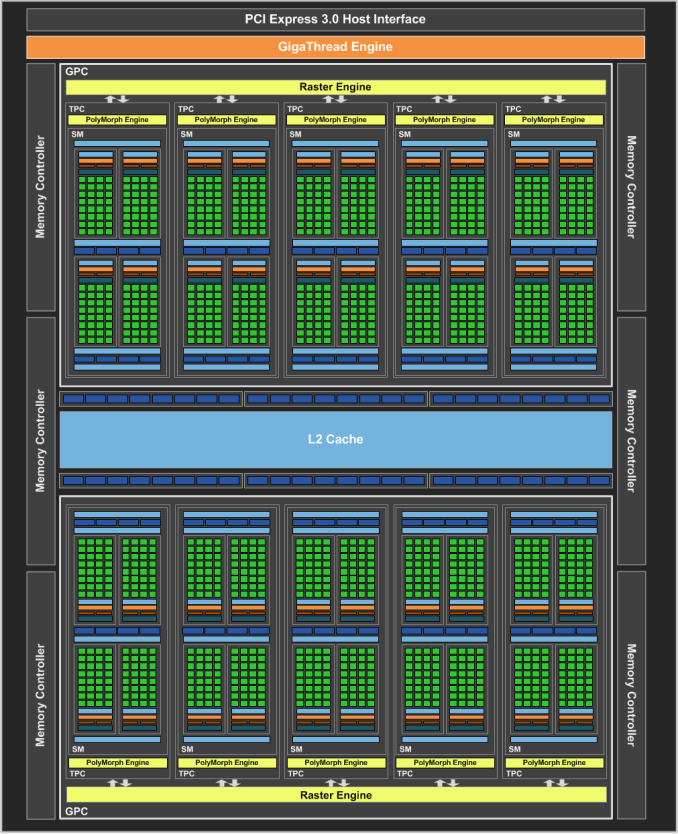 The significance of this is threefold. First, it means that GP106 isn’t strictly half of a GP104. Second, it means that it has a higher ratio of ROP throughput, L2 cache capacity, and memory bandwidth per CUDA core than parts such as GTX 1080. Third, it’s only the second time in recent history where NVIDIA has used a larger backend configuration on a mainstream part – GK106 being the first – which after NVIDIA’s performance gains and overall success with Maxwell, comes as a bit of a surprise.

In any case, what we’re left with is a slightly unbalanced design for GTX 1060/GP106. The GPU’s 10 SMs are divided up into two GPCs, half the configuration of GP104. This means that GP106 can rasterize 32 pixels per clock on the frontend, but the backend ROPs can accept 48 pixels per clock. This kind of imbalance is not a bad thing – the ROPs are responsible for other tasks such as MSAA that eat up more time – but it’s interesting thing to see happen, as it gives us a bit of an idea of what kind of bottlenecks NVIDIA needed to balance out behind the scenes in the development process.

As it stands, I suspect that the larger backend is a compromise solution for coming up with more memory bandwidth versus GTX 960/GM206. Relative to their Maxwell predecessors, all of the other Pascal parts so far have received significant bandwidth increases in order to feed their faster GPUs. For GTX 1080 this was GDDR5X, and for GTX 1070 this was faster 8 Gbps GDDR5 combined with a unified 256-bit memory bus. For GP106 to follow this path, NVIDIA would need to either implement GDDR5X (a more costly and volume-limited technology at this time), or go with a wider memory bus (via a wider overall backend), and the company has seemingly opted for the latter. 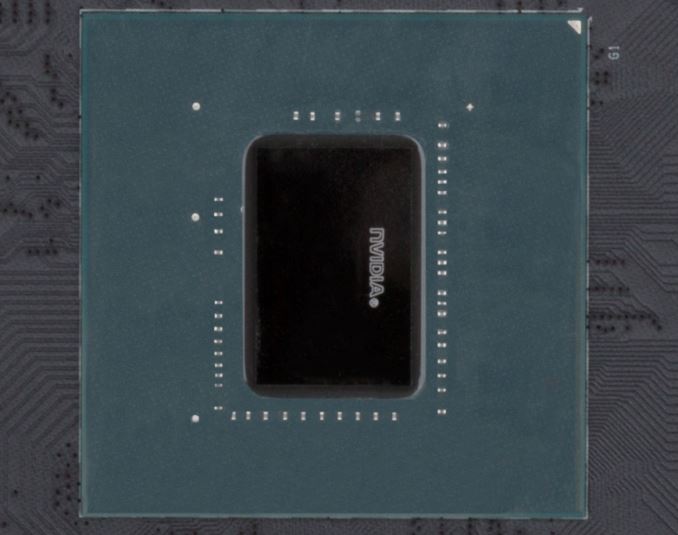 Meanwhile even with 6 ROP partitions, GP106 ends up being a relatively small chip. At 200mm2 on the dot, it’s 12% smaller than the 227mm2 GM206 that precedes it, and even smaller than the 214mm2 GK106 before that. This makes GP106 NVIDIA’s smallest mainstream (-06) GPU to date, something that no doubt is an important factor in keeping the GPU economical on TSMC’s cutting edge (read: more expensive) 16nm FinFET process.

Moving on to clockspeeds, the GTX 1060 ships with a 1.7GHz boost clock, which is smack-dab in the middle of the boost clocks for the GTX 1080 and GTX 1070. In other words, the card is clocked just as high as its higher-end siblings, and the only difference will be the overall number of processing units within the GPU. On a pure SM basis this puts GTX 1060 at 4.35 TFLOPs, giving the card 67% of the compute and geometry performance of the GTX 1070. Or to compare it to the outgoing GTX 960, we’re looking at an 80% increase in those same metrics.

Geeking out about GP106 aside, let’s talk about the rest of what makes up GeForce GTX 1060. Owing to its non-power-of-two memory bus size, GTX 1060 will be shipping with 6GB of VRAM, which is 2GB less than the GP104 cards and 2-4GB more than the older GTX 960. The card will use the same 8Gbps memory as on GTX 1070, giving the card 192GB/sec of total memory bandwidth, a hefty 71% increase over GTX 960. Combined with the increased memory compression efficiency of Pascal, it goes without saying that GTX 1060 should hopefully not find itself wanting for memory bandwidth. 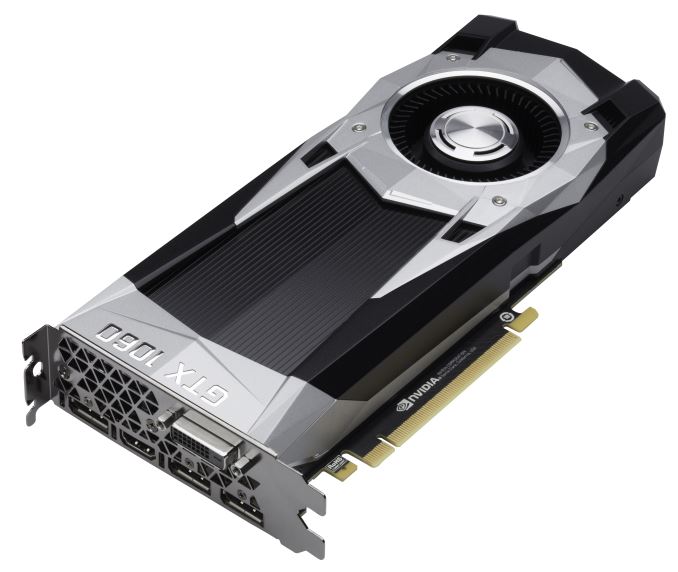 As for power and thermals, NVIDIA is slotting GTX 1060 in the same TDP envelope as the outgoing GTX 960, which is 120W. This makes the GTX 1060 NVIDIA’s flagship sub-150W card, suitable for installation in systems that only offer a single 6-pin power connector or can’t ventilate GTX 1070+ levels of heat.

Overall NVIDIA’s TDPs have fluctuated a bit over the years, especially in the hyper-competitive mainstream market. After reaching a high of 170W with GTX 760, NVIDIA invested most of their Maxwell savings in lowering the TDP for GTX 960, and this seems to have worked out well for them. Still, I think it will be interesting to see if what follows GTX 1060 will stay below 150W, as we’re at the start of what’s likely a very long cycle on TSMC’s 16nm process.

What does 120W get you then? In short, it gets you just shy of GTX 980 performance combined with Pascal’s feature set for 45W (27%) less power consumption. Or to frame this in reference of the other Pascal cards, we’re looking at about 73% of GTX 1070’s performance. Consequently this card rides a sometimes fine line between being a 1080p card and a 1440p card, but in practice it’s going to be best suited as a no-compromises 1080p card, especially as newer games hit the market.

As for where it fits into the market, as with the GTX 1080 and GTX 1070, the situation is a bit more complicated due to the presence of reference cards and how they’re priced and sold. NVIDIA has extended the Founders Edition line to the GTX 1060, offering a reference card here as well. However the Founders Edition card is once again positioned as a premium card, so while its otherwise stock performance is a good proxy for the GTX 1060’s baseline performance, its price and positioning is not. Equally important, unlike the higher-end cards, the GTX 1060 Founders Edition isn’t even a retail card in the traditional sense, but rather is only sold by NVIDIA through their web store.

With the GTX 1060 then, the supply of cards is almost entirely partner focused. While the reference card exists, the only card sold through traditional retailers/etailers will be their semi and fully custom designs. For partners this is a good thing, as it means they can more readily differentiate themselves from one another and need not directly compete with the reference design. At the same time for buyers this means we’re looking at a wider variety of designs, ranging from basic MSRP designs to high-end designs like the custom card we’re also having a look at today, the ASUS ROG Strix GTX 1060 OC. 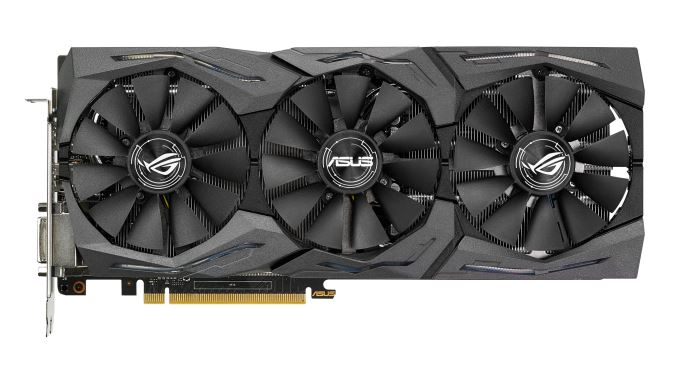 Pricing then is equally variable. The base MSRP for GTX 1060 starts at $249, with the NVIDIA Founders Edition card retailing for $299. Various factory overclocked then run the gamut from $259 to $314 for the aforementioned ASUS card. The end result is that there are a lot of options on the market, both with the benefit of variety and the drawback of potentially having to do some hunting to get a specific card when it’s in stock.

At least at MSRP then, the GTX 1060 is consistently priced with NVIDIA’s other Pascal cards, which is to say higher than the 900 series. Overall, GTX 1000 series pricing is closer to that of the 700 series, with the GTX 1060 launching at the same $249 price point the GTX 760 launched at back in 2013. As a result NVIDIA is going to miss the $199 mainstream sweet spot that the GTX 960 launched at, at least for the time being.

As for the competition, at MSRP GTX 1060 is clearly a shot across the bow at AMD’s Radeon RX 480 8GB, not quite overlapping it in price but otherwise going after the same target market with very aggressive performance and power targets. The difference is going to be that while AMD offers a $199 option with the 4GB RX 480 (albeit in limited numbers), NVIDIA will be aiming higher entirely, so there’s not a perfect overlap between the two. That said, NVIDIA and its partners will still be aiming to make the GTX 1060 the better value in the long run.

The bigger issue for NV and partners right now is the supply issue. NVIDIA has struggled to keep supply in check with demand for the entire GTX 1000 series. GTX 1060 has not proven any different in that regard. Inventory trackers show that cards come into stock regularly, but they also go just as quickly. The one thing that has gone better for buyers – or at least those who can get their hands on a card – is that prices haven’t gone over MSRP like on the other GeForce cards. GTX 1060 cards still hit the market at $249. Traditional economic theory means that having prices hold to MSRP is probably worsening the supply shortage – so there is a tradeoff to be had – but it also means that NVIDIA and its partners (and their retailers) aren’t gouging consumers.