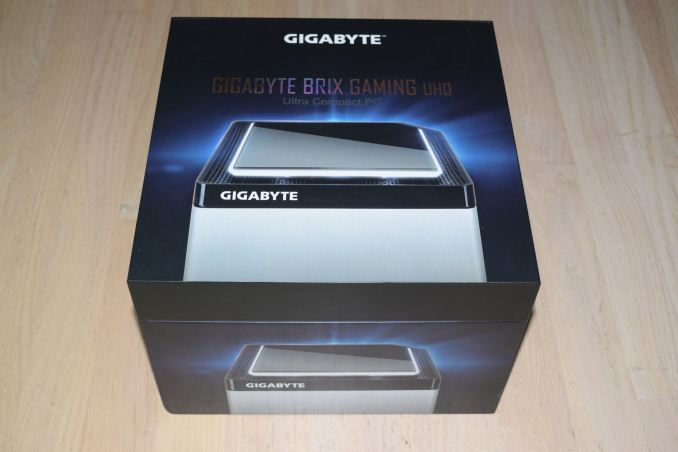 The PC market has been subject to challenges over the last several years. However, gaming systems and small form-factor (SFF) PCs have weathered the storm particularly well. Many vendors have tried to combine the two, but space constraints and power concerns have ended up limiting the gaming performance of such systems. GIGABYTE, in particular, has been very active in this space with their BRIX Gaming SFF PCs. The BRIX Gaming UHD GB-BNi7HG4-950 that we are reviewing today is the result of GIGABYTE going back to the drawing board with the feedback from the 2014 BRIX Gaming BXi5G-760. The BXi5G-760 combined a GK104 Kepler-based NVIDIA GTX 870M (marketed as a GTX 760) and a Haswell-based Core i5-4200H in a form factor similar to the traditional NUCs. The result of that was a very noisy system that throttled under sustained loading conditions. The BRIX Gaming UHD GB-BNi7HG4-950 aims to fix those complaints with a Skylake-H platform and a discrete Maxwell GPU.

The GIGABYTE BRIX Gaming UHD GB-BNi7HG4-950 is marketed as a powerful UHD-ready gaming mini-PC that is equipped with a desktop-class GTX 950 GPU. It addresses many of the shortcomings of its predecessor in the BRIX Gaming lineup. The small chassis size and multiple cooling fans were major drawbacks in the BXi5G-760. The GB-BNi7HG4-950 solves that by having only one fan at the bottom of the chassis, and increasing the volume of the unit from 0.88L to 2.6L. The CPU is much more powerful (Core i7-6700HQ vs. Core i5-4200H) despite having approximately the same TDP (45W). On the GPU side, the GTX 860M ('GTX 760') has been replaced by the GTX 950 ('overclocked GTX 965M'). Since we don't have exact TDP numbers for these 'rebadged / modified' GPUs, all we can say from our eventual power consumption investigation is that GIGABYTE can handle a more power-hungry GPU without throttling by using the updated chassis and thermal solution.

Despite having similar two-dimensional footprints, the height of the GB-BNi7HG4-950 is almost 4x that of the BXi5G-760. Volume-wise, the new chassis comes in at 2.6L (220 mm x 110 mm x 110 mm). The taller chassis allows GIGABYTE to get away with one fan at the bottom that pulls in air and exhausts it through the ventilation slots at the top. This actually turns out to be a very efficient thermal solution, as we shall see further down in this review.

GIGABYTE currently has only the barebones version of the GB-BNi7HG4-950 in the North American market. However, our sample was the GB-BNi7HG4-950-MF, which came with one memory slot occupied, a M.2 SATA SSD and a 2.5" hard drive pre-installed. Windows 10 Home was also available for configuration when the unit was booted up. Consumers wishing to get a better experience with the system will probably want to ensure that both memory slots are occupied and a M.2 PCIe 3.0 x4 SSD is installed in one of the two available M.2 slots. The full specifications of our review unit are summarized in the table below.

In addition to the main unit, the PC package also includes a 180W (19.5V @ 9.23A) power brick along with US power cords and a WLAN antenna. A quick start guide with installation instructions for the memory and disk drives, screws for mounting 2.5" drives, a user manual and a CD with the drivers round up the rest of the package. 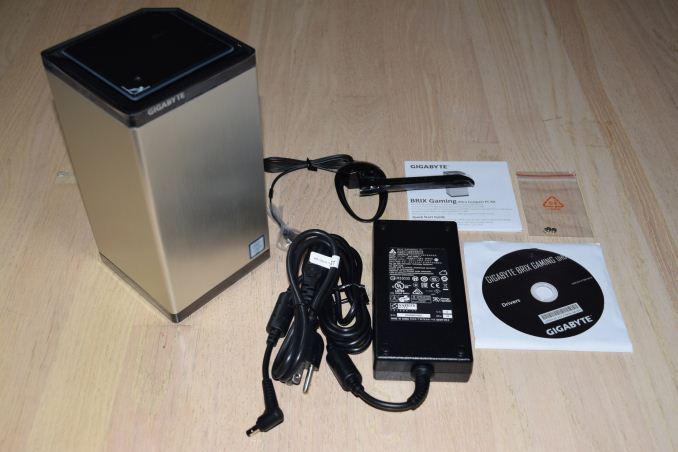 The gallery below shows the chassis design and a little bit of the internals. The procedure to install the DRAM and the drives are a lot more complicated compared to the other mini-PCs in the market. In order to make things a little bit easier for people who purchase the barebones version, GIGABYTE has a YouTube video of the full teardown / components installation process.

Unlike the rather plain industrial design of the BXi5G-760, the BNi7HG4-950 moves things up several notches. The sides of the chassis are all brushed aluminum and the top panel is black with LEDs around the perimeter. One of the flat side edges of the chassis has the four display outputs (1x HDMI 2.0 + 3x mini-DP 1.2). The other I/Os are all spread out in one small rectangular panel in the rear. These include three USB 3.0 ports, a USB 3.1 Gen 2 Type-C and a USB 3.1 Gen 2 Type-A port, audio jacks, a RJ-45 Gigabit LAN port, a power inlet, connections for the antennae and the power button itself. On the whole, the BRIX Gaming UHD impresses in the looks department much more compared to the previous generation.

The GB-BNi7HG4-950 uses a Skylake-H CPU in conjunction with the Sunrise Point HM170 platform controller hub (PCH). This is similar to the Skull Canyon NUC. However, the latter opts to keep the 16 PCIe lanes off the CPU unconnected. The BRIX, on the other hand, uses 12 of those to enable two different peripherals. In our review configuration, the CPU's PCIe lanes are distributed as below: 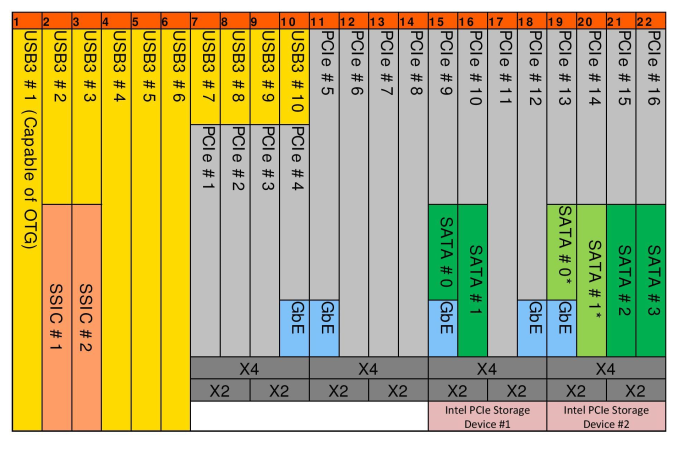 Out of the 22 available high-speed I/O lanes on the H170 (as shown above), 13 are used. Seven HSIO lanes are be used in PCIe mode as per the configuration below.

The Type-A and Type-C USB 3.1 Gen 2 ports in the system are from the ASMedia ASM1142 USB 3.1 xHCI Controller. The three USB 3.0 ports in the rear panel are likely from HSIO lanes 4 through 6, while the two SATA ports (both supporting 2.5" drives) are likely from lanes 21 and 22. The Intel I219-LM GbE LAN port is, in all probability, connected to HSIO lane 11.

The BIOS features offered by GIGABYTE in its BRIX lineup are rather basic. There are no options for memory overclocking (supported by Skylake-H) and the BIOS doesn't even have an in-built update procedure using a newer version on a USB stick. That said, the available options are more than enough for the users who want a plug-and-play experience once the RAM and disk drive are installed.

In the table below, we have an overview of the various systems that we are comparing the GIGABYTE GB-BNi7HG4-950 against. Note that they may not belong to the same market segment. The relevant configuration details of the machines are provided so that readers have an understanding of why some benchmark numbers are skewed for or against the GIGABYTE GB-BNi7HG4-950 when we come to those sections.