Seagate to Shut Down One of Its Largest HDD Assembly Plants

As a part of its cost-cutting efforts, Seagate has decided to shut down its HDD manufacturing plant in Suzhou, China. The factory is one of the company’s largest production assets and its closure will significantly reduce the company’s HDD output. Seagate intends to lay off ~2200 employees, but it is unclear what it intends to do with the facility, which it owns.

The factory in Suzhou, China, assemblies hard drives and performs their final testing before shipping. The plant does not produce HDD subassemblies and thus is not vertically integrated, but at 1.1 million square feet (102 thousand square meters), this is one of Seagate’s largest manufacturing assets and the largest drive assembly facility. The company got the factory from Maxtor, when it acquired it in 2006. According to a media report, the plant no longer makes products and the last employees will be laid off on January 18, 2017.

“As part of our continual optimization of operational efficiencies, Seagate has made the difficult decision to shut down its factory in Suzhou, China,” an alleged statement by Seagate reads. “We regret that our Suzhou employees will be affected by this action, which reflects our ongoing commitment to reduce Seagate’s global manufacturing footprint and better align the business with current and expected demand trends.”

Last year Seagate announced intentions to optimize its manufacturing capacities from around 55-60 million drives per quarter to approximately 35-40 million drives per quarter. In 2016, the company already fired about 8,000 employees from different locations, but that was only a part of the strategy. With the plan to shut down the plant in Suzhou, the company actually reduces its ability to produce the drives. 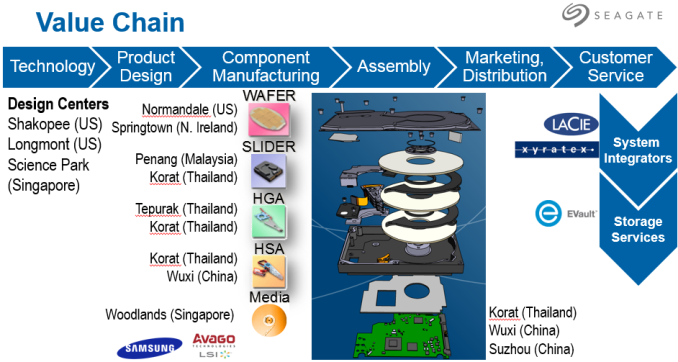 After Seagate shuts down its plant in Suzhou, China, it will have two vertically integrated HDD production facilities in Wuxi, China, and Korat, Thailand. Both factories product drive subassemblies and actual HDDs, hence, by using only these two plants the company optimizes logistics (as it no longer has to transport drive subassemblies to Suzhou) and cuts its per drive manufacturing costs. Meanwhile, it remains to be seen what happens to Seagate’s factories that only produce drive subassemblies (sliders and HGAs).

It is important to note that while Seagate cuts down HDD assembly capacities, it does nothing to plants that produce heads, media and substrates. Over the past few years, unit shipments of HDDs have declined, but their average capacities increased (especially capacities of HDDs for datacenters) due to strong demand for high-capacity SKUs. Therefore Seagate may not need to produce a lot of drives, but it needs to pack about the same amount of heads and platters into fewer HDDs. Moreover, in the coming years, the company will need more heads because of new manufacturing technologies (TDMR, HAMR, etc.) and more media because it can now pack more platters into high-end helium-filled drives.

What remains to be seen is what Seagate plans to do with its manufacturing assets from the Suzhou facility. The fab is so large that it does not seem that all of its equipment could be relocated to other facilities. Moreover, the building itself is huge and it is unclear what will happen to it.