Ryzen Mobile is Launched: AMD APUs for Laptops, with Vega and Updated Zen

When AMD launched the desktop Zen processors, it also branded a series of five technologies under the ‘SenseMI’ name. We covered these in detail in our Ryzen 7 review, but in short, it covers the following:

With Ryzen Mobile, the features relating to frequency get an updated model, while Pure Power gets a bigger boost. We’ll cover the power changes on the next page, but it is worth talking about how AMD has improved Precision Boost and brought XFR to laptops.

Most CPU turbo algorithms work by sensing how many cores and threads are under load, determining if the CPU has enough power headroom, and applying a voltage. This is why in the past both of the major x86 CPU manufacturers will quote a ‘per-core turbo frequency’ to show what the frequency should be when different numbers of cores are loaded and all else is fine (there is temperature/power headroom). 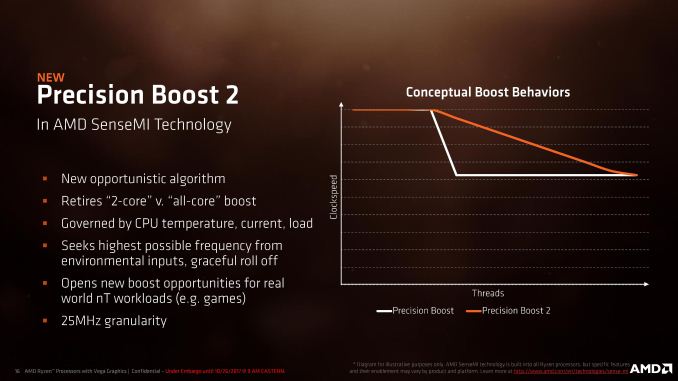 For Ryzen Mobile, AMD is pivoting to a new turbo model. When the system is in the P0 (top) turbo state, the system will use a new opportunistic turbo algorithm that rather than being based on the cores under load, is governed by CPU temperatures, currents, and how much load is being applied. The algorithm takes into account all the environmental inputs, such as skin temperature sensors and battery life, and will provide the best turbo frequency it can, regardless of if one thread is being used or all threads are being used. 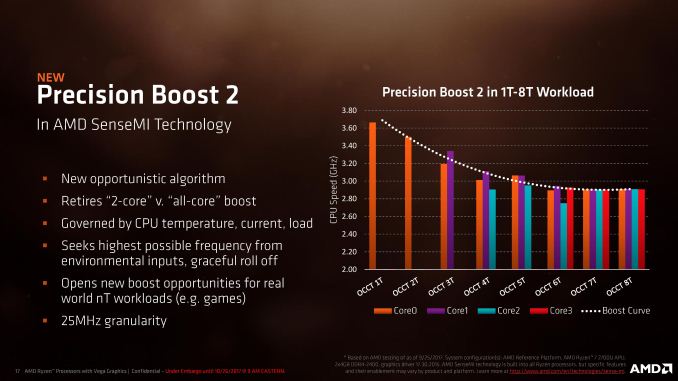 It will be able to provide boost amounts at the 25 MHz granularity level, similar to how the desktop processors work, with the idea being that in most cases, if the system has a lot of cores available and a background process performs some very light work (such as checking for updates), rather than dropping 500-800 MHz because more cores are loaded, the system will keep at the high frequency.

AMD is stating that this has a big effect on real-world workloads, typically those that have variable thread workloads such as gaming.

When asked if Precision Boost 2 would be coming to the next generation of AMD’s Desktop Ryzen processors, I was told that ‘it could be inferred / it’s a safe bet’.

Because mobile systems are thermally limited, battery limited, power limited, and battery limited, offering ‘extra’ turbo headroom is not really something that processor manufacturers like to do. As a result, most of the Ryzen Mobile-powered notebooks will not have any form of XFR – AMD will be allowing it on a case-by-case basis for vendors that overengineer their chassis to be capable of supporting a higher power profile. 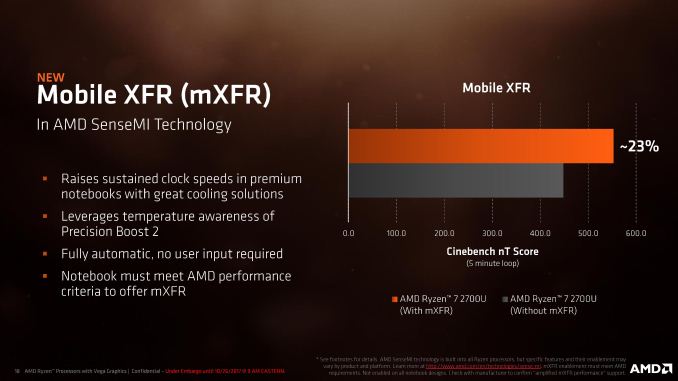 This feature essentially extends the average level at which Precision Boost 2 will operate, and also marks what could be considered a higher configurable TDP. One of the systems being launched with Ryzen Mobile this side of Christmas will be mXFR enabled, because the chassis is designed for 25W rather than 15W. It is worth noting that AMD states the configurable TDP of the Ryzen Mobile chips goes up to 25W, so this is likely the case what is happening.

AMD is fully using Vega’s encode and decode capabilities with Ryzen Mobile. The big inclusion for AMD’s mobile devices is the ability to decode VP9, the codec prefered in particular by YouTube.