Shuttle has formally introduced its new entry-level ultra-compact form-factor PC, the XPC Slim DH310, a barebones PC for Intel’s Coffee Lake processors with up to six cores. The systems have a volume of only 1.3 liters, they can accommodate all mainstream CFL CPUs and drive up to two 4K displays.

The Shuttle XPC slim DH310 is based on Intel’s H310 PCH and supports all of Intel's 65 W Kaby Lake and Coffee Lake processors. The system is cooled via one of Shuttle’s ICE modules, which uses a large heatsink and two 60-mm fans, one of which is PWM-controlled and the other can either be set to a constant speed or vary based on the chip’s temperature. The highest-performing CPU supported by the DH310 is Intel’s six-core Core i7-8700, but given the ultra-compact form-factor of the chassis and two relatively small fans I do wonder if it may be more practical to use a 35 W chip in a bid to ensure a quiet operation.

Moving on to DRAM and storage capabilities of the Shuttle XPC slim DH310. The barebones PC has two SO-DIMM slots that support up to 32 GB of DDR4-2666 memory, one 2.5-inch/7-mm bay for a storage drive, as well as one M.2-2280 slot for an SSD. The latter supports PCIe and SATA modes, but it is unclear whether it uses PCIe 3.0 lanes from the CPU or PCIe 2.0 lanes supported by the Intel H310 PCH (in the latter case an M.2 SSD will get around 2 GB/s of bandwidth). For those who need an additional storage device, the DH310 has an SD card reader.

When it comes to connectivity, the Shuttle XPC slim DH310 looks rather good. The system has four USB 3.1 Gen 2 ports, four USB 2.0 ports, two GbE connectors (driven by Intel’s i211 controllers), two display outputs (DP 1.2, HDMI 2.0), two COM ports, and two 3.5-mm audio headers. In a bid to get Wi-Fi and Bluetooth, end-users will need to install an M.2-2230 card. Shuttle recommends to use Intel’s Wireless-AC 9560 802.11ac Wi-Fi solution featuring a CNVi interface. As for power, the UCFF barebones is outfitted with a 90 W external PSU. 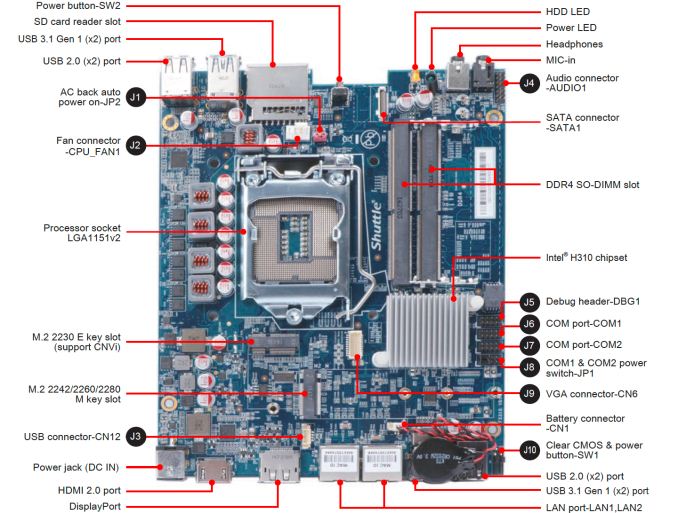 Shuttle has already started to ship its XPC slim DH310 to select retailers in Europe and will probably expand its availability to other territories in the coming weeks. The recommended retail price of the product is €214 ($248) without VAT, so think of around €250 ($289) with VAT included.

Shuttle first demonstrated its XPC slim DH310 alongside the XPC slim DH370 at Computex earlier this year. The latter will probably be more advanced than the former, but it looks like it will become available slightly later.