In the latter half of this year, Samsung launched several new enterprise/datacenter SSD product lines. This is part of a new strategy to make its enterprise storage products more accessible to smaller customers. The 860 DCT, 883 DCT, 983 DCT and 983 ZET all use hardware that Samsung was already selling under different names, but are now being sold by retailers in individual quantities. We'll be testing the 983 ZET next month, but the other three new models have already survived our testing.

The Samsung 860 DCT uses the same hardware as the 860 EVO consumer SSD, but with enterprise-oriented firmware. That means SLC caching is out and the firmware is optimized to provide consistent sustained performance, even though that means peak write speeds are far lower and the usable capacity is 4% lower due to increased overprovisioning. The 860 DCT also doesn't offer the idle power saving modes that consumer drives feature. The 860 DCT is an entry-level server drive that lacks many features traditionally associated with enterprise SSDs, most notably power loss protection capacitors. Like consumer SSDs, the 860 DCT operates with a volatile write cache, though this can be disabled at further cost to write performance.

The 860 DCT is intended for use primarily on very read-heavy workloads, with a very low volume of writes that preferably would be mostly sequential – for example, serving up streaming video. This is reflected by the write endurance rating of just 0.2 drive writes per day. Samsung doesn't intend for the 860 DCT to compete against any of their existing enterprise SSDs. Instead, they are targeting use cases where customers are currently using consumer-grade SSDs or mechanical hard drives. 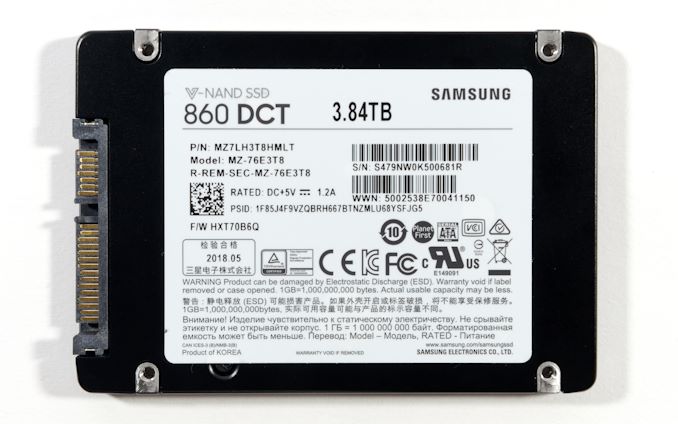 This is pretty much the same description that everyone is giving for their first enterprise QLC SSDs, but the 860 DCT is still a TLC-based drive at this point. We expect its successor to switch to QLC NAND. Samsung says their currrent MJX controller can support 8TB SSDs, but so far they haven't gone beyond 4TB. As NAND and DRAM prices will continue to decline in 2019, it probably won't be long before they decide to max out the MJX controller.

The labeling on the 860 DCT differs slightly from Samsung's retail consumer SSDs, but inside we find exactly the same PCB, with components that differ only in date codes and lot numbers. Our 3.84 TB 860 DCT sample uses eight NAND packages each containing eight of Samsung's 512Gb 64-layer 3D TLC V-NAND, for a total raw capacity of 4 TiB.

The Samsung 883 DCT is a more traditional enterprise SATA SSD, with the power loss protection capacitors that the 860 DCT lacks. The controller and NAND are still the same as in the 860 DCT and consumer 860 EVO. Random write performance is a bit better than the 860 DCT and the write endurance rating jumps up to 0.8 DWPD, a fairly mainstream value for enterprise drives intended to be used with read-heavy workloads. 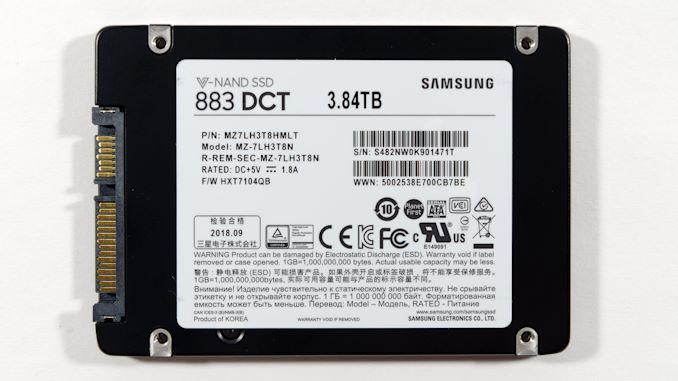 The 883 DCT product line extends all the way down to 240GB where the 860 DCT family starts at 960GB. Samsung didn't sample the two smallest capacities of 883 DCT, but they are most likely to be used in applications that aren't performance-critical, such as OS boot drives. Samsung uses their smaller 256Gb TLC dies on the 960GB and smaller models, while the 1.92TB and 3.84TB models use the 512Gb TLC dies.

The addition of power loss protection capacitors doesn't require Samsung to adopt a larger PCB than the 860 DCT/860 EVO hardware, but it does give a more crowded layout. The 3.84 TB 883 DCT only has six large surface-mount capacitors plus empty pads on the back for two more, but there are enough other small components added that the large NAND, DRAM and controller packages had to be rearranged.

The Samsung 983 DCT is an entry-level enterprise NVMe SSD. It has the same 0.8 drive writes per day endurance rating as the 883 DCT SATA drive, but boasts much higher performance. The 983 DCT uses the Samsung Phoenix controller that we are familiar with from the consumer 970 EVO and 970 PRO, and the OEM client PM981 SSDs. As usual, SLC caching is not implemented on the enterprise products, so write performance is substantially lower than what the consumer 970 EVO advertises, but read performance is similar. 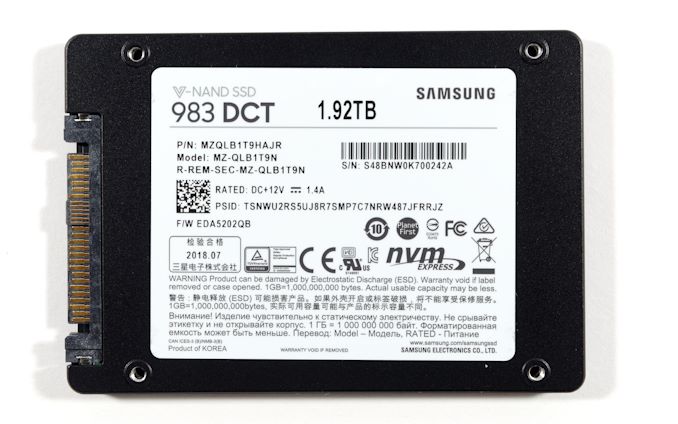 The M.2 version of the 983 DCT is rated to use significantly less power than the U.2 version. The 1.92 TB model is the only one that appears to have its performance meaningfully constrained by this, with sequential write speeds of 1.4GB/s instead of 1.9GB/s, and reduced random read and write performance.

The 983 DCT M.2 uses the 22x110mm card size, longer than the consumer standard of 80mm in order to accommodate the power loss protection capacitors. The 983 DCT M.2 is also double-sided, because unlike the 970 EVO it doesn't need to squeeze into thin laptops. This allows Samsung to use four NAND packages instead of two, and consequently shorter stacks of NAND dies.

The 2.5" version of the 983 DCT uses the same 7mm thick form factor as most SATA SSDs, but the construction is a bit different from Samsung's SATA drives: the screws holding the case together enter from the top instead of the bottom, and are covered by a label that puts Samsung's logo upside down relative to their SATA drives.

Inside, we find a PCB that uses almost all of the available space, with more than twice as many power loss protection capacitors as on the M.2 version. To keep all eight channels of the Phoenix controller busy and maximize performance, Samsung uses their 256Gb TLC dies on both capacities. The 983 DCT also features 50% more DRAM per GB of NAND than is common for SATA drives; some of this extra may be used for more robust ECC, but the primary purpose is most likely enabling higher performance.