The packaging of this card is pretty much the same as the previous Personal Cinema cards from eVGA; though, the box now advertises the GuidePlus electronic program guide (aka EPG) and Forceware Multimedia. 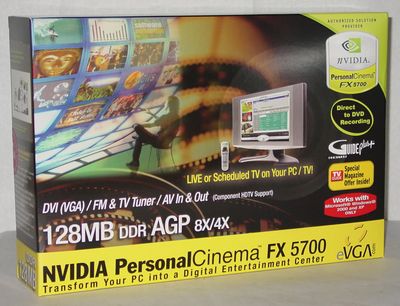 
Unlike the rest of the GeForce FX Personal Cinema cards, the eVGA GeForce FX 5700 Personal Cinema is the first GeForce FX Personal Cinema that doesn't use a 40-in breakout design. Instead, this card takes an approach similar to most of ATI's All-in-Wonder cards. Instead of a connector for video in and video out, NVIDIA's design incorporates both functions into one. Additionally, NVIDIA wisely moves the audio out function out of the breakout design because, if you think about it, you will almost always need audio out (there is a cable included) to pipe TV audio into the system, though you may not always be using video in and video out capabilities.


The breakout box is much similar in comparison to the "pod" of previous GeForce FX Personal Cinema cards. Measuring in at 2.6" x 1.8" x 0.9", the breakout box is basically the same size as the purple video in breakout box for ATI's AIW cards (ATI's is actually a tad shorter in width). While the design is nicely done, more so than the previous one, NVIDIA's single VIVO (video in/video out) design isn't necessarily better than ATI's dual cable design for VIVO (one cable for video in and one for video out). It is really a matter of preference. For us, we prefer the ATI design, since you may be using video out, but not necessarily use video in at the same time or vice versa. 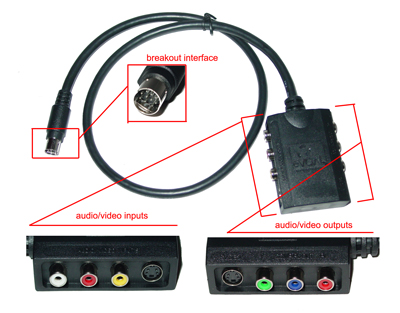 
Note that this card doesn't provide dual monitor support. Thus, it will only support overlay on a single display.