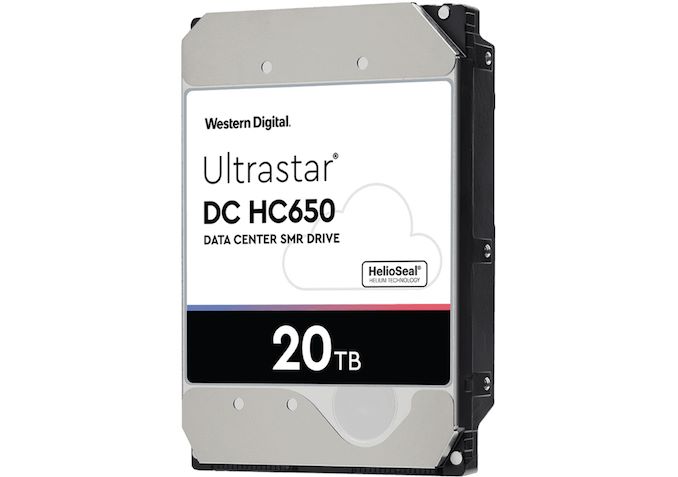 Western Digital has started partner sampling of its 18 TB and 20 TB energy-assisted magnetic recording (EAMR) drives. The HDDs utilize WD's up and coming EAMR tech to further improve their storage density, allowing hyperscalers and similar customers to continue improving the density of their storage clusters. WD is on track to start volume shipments of these products sometimes in the first half of next year.

According to an announcement posted by Western Digital, the new 18 TB Ultrastar DC HC550 CMR and 20 TB Ultrastar DC HC650 SMR hard drives have been shipped to a dozen of enterprise OEMs, as well as operators of hyperscale cloud datacenters. This also includes Dropbox, who has been one of the prominent backers of the host-managed SMR technology. Western Digital isn't disclosing the exact number of 18 TB and 20 TB HDDs it has shipped so far, but given the number of potential customers and the very nature of large datacenters, we are likely looking at thousands of units.

The key difference, of course, between Western Digital’s new 18 TB and 20 TB hard drives and their predecessors is usage of the company’s energy-assisted magnetic recording technology. Western Digital has been relatively tight-lipped for a bit now about its ‘EAMR’ tech and just what they're doing under the hood; for the moment the company is only disclosing that it is a subset of its microwave assisted magnetic recording (MAMR) technology. However the company has added that it does not use a spin-torque oscillator, which is a key component of normal MAMR.

One thing to note is that the 18 TB Ultrastar DC HC550 is the ‘base’ model that uses conventional magnetic recording (CMR, which is what HDD makers call non-SMR drives these days), which means it behaves more or less like typical 7200 RPM enterprise-grade helium-filled HDDs. Meanwhile, the 20 TB Ultrastar DC HC650 uses shingled magnetic recording (SMR) with all of its peculiarities.

Overall, the sheer size of the drives does mean that WD's customers will be evaluating factors such as IOPS rates versus the increased size. Since IOPS is essentially constant for a HDD – seek times haven't really changed – the IOPS-per-TB rate has continued to drop with larger drives, with these drives continuing that trend. That especially goes for the SMR drive, of course, with shingling resulting in an even lower IO operation rate. As a result, only select companies – who happen to run software that considers peculiarities of SMR and a lower per-TB IOPS – are expected to use Western Digital’s 20 TB SMR drives.

MAMR aside, both drives are based on the company’s nine-platter helium-filled enterprise-class platform. WD's latest generation enterprise tech incorporates triple-stage micro actuators that are optimized for working in multi-drive environments (e.g., racks). The enhancements of such platforms usually include top and bottom attached motor, top and bottom attached disk clamps, RVFF sensors, humidity sensors, and some other methods to improve reliability and guarantee steady performance. To that end, the HDDs are rated for a 550 TB/annual workloads, a 2.5-million MTBF, and are covered by a five-year limited warranty.

If all goes according to plan for Western Digital, expect to see them shipping the new 18 TB CMR and 20 TB SMR HDDs in volume in the first half of 2020. At which point hyperscalers and other enterprise customers will start their own ramp ups for installation.