Back in April, Intel released its Z490 chipset for its 10th generation Comet Lake processors with a choice of over 44 models for users to select from. One of the more enthusiast-level models for Z490 was announced by ASUS via its ROG Maximus Apex, with solid overclocking focused traits, but equally with enough features for performance users and gamers too. ASUS has announced that the ROG Maximus Apex is now available to purchase with some of the most prominent features including three PCIe 3.0 x4 M.2 slots, a 16-phase power delivery, an Intel 2.5 GbE Ethernet controller and an Intel Wi-Fi 6 wireless interface.

Not all motherboards are created equal, and not all conform to fit a specific purpose e.g content creation, gaming, or workstation. One of ASUS's most distinguished brands is the Republic of Gamers series, with its blend of premium controllers, aesthetics, and the models are generally full of features. The Apex series is the brands overclocking focused models, and there have been some fantastic Apex models across the chipsets. ASUS has just put the new ROG Maximus XII Apex into North American retail channels. 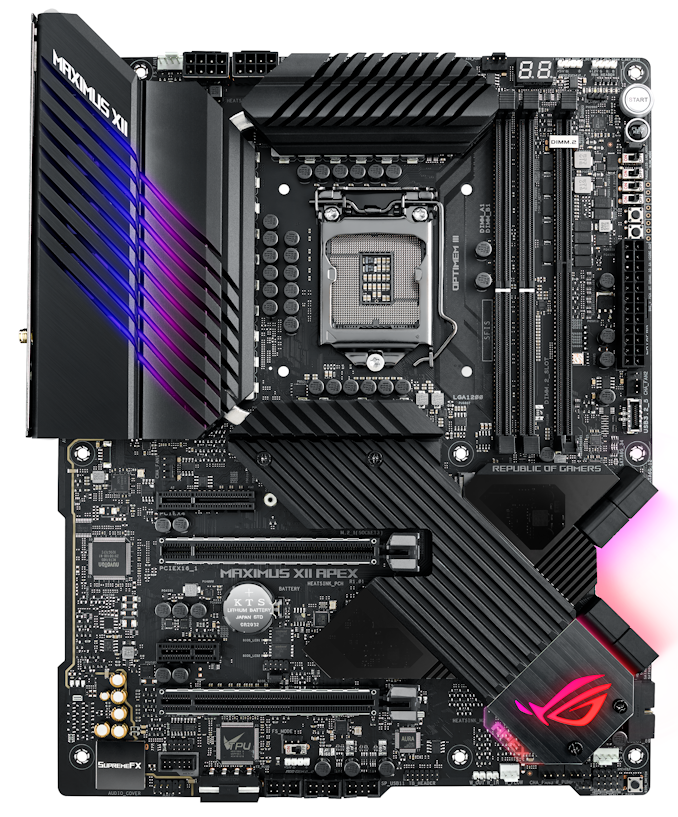 Some of the most notable features of the ASUS ROG Maximus XII Apex include support for up to three PCIe 3.0 x4 M.2 drives, with the use of an included ROG DIMM.2 module included in the accessories bundle. Looking at storage, the Apex includes eight SATA ports which use a friendly V-shaped design to allow easier installation of SATA drives. Despite this board being ATX, ASUS includes just two memory slots with support for up to 64 GB of DDR4-4800 memory, which is likely to improve latencies and overall memory performance when overclocking memory. There are two full-length PCIe 3.0 slots which operate at x16 and x8/x8, with a half-length PCIe 3.0 x4 slot and a single PCIe 3.0 x1 slot. On the rear panel are a load of USB connectivity with four USB 3.2 G2 Type-A, one USB 3.2 G2 Type-C, and five USB 3.2 G1 Type-A ports. For networking, ASUS includes an Intel I225-V 2.5 GbE ethernet controller and an Intel AX201 Wi-Fi 6 interface which also includes support for BT 5.1 devices. The board also includes a SupremeFX S1220A HD codec which adds five 3.5 mm audio jacks and a single S/PDIF optical output on the rear.

Underneath the large power delivery heatsink is a big 16-phase setup with sixteen TDA21490 90 A power stages, with an ASP1405I PWM controller operating in 7+1 mode. This is due to ASUS opting to use teamed power stages with fourteen for the CPU, and two for the SoC, with teamed designed to improve transient response when compared to setups that use doublers. Providing power to the CPU is a pair of 12 V ATX CPU power inputs, while a 4-pin Molex is present to provide additional power to the PCIe slots.

The ASUS ROG Maximus XII Apex is currently available to purchase at Digital Storm and Cyberpower in the US, with stock expected to land at both Amazon and Newegg very soon. Stockists and retailers such as Scan Computers in the UK also have stock at present.