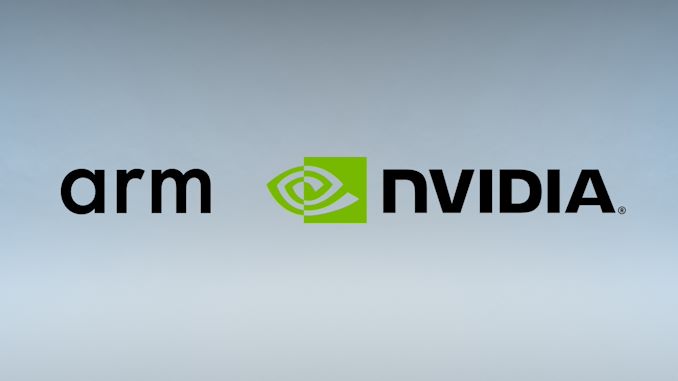 Following a number of rumors and leaks, NVIDIA this evening announced that it is buying Arm Limited for $40 billion. The cash and stock deal will see NVIDIA buy the semiconductor and IP design firm from SoftBank and its associated SoftBank Vision Fund, with NVIDIA taking an eye towards expanding Arm’s IP licensing business while also using Arm’s technology to further pierce into the datacenter market. The deal is just being formally announced today and will likely not close for some time, as it is expected to be required to clear multiple regulatory hurdles in the UK, US, China, and other governments across the globe.

The groundbreaking deal will see NVIDIA take over Arm Limited from SoftBank, who previously acquired the then-independent Arm in 2016 for $32 billion. At the time, SoftBank acquired Arm primarily as an investment vehicle, expecting the successful company to continue to grow as the number of chips shipped on the Arm architecture continued to explode. However, the investment firm has been under pressure in recent months as some of its other investments have taken big hits – particularly WeWork and Uber – and while SoftBank isn’t officially commenting on why it’s selling Arm after all of this time, there’s ample reason to believe that the firm is selling off one of its more valuable assets in order to shore up its balance sheets.

The $40 billion transaction means that SoftBank will come out ahead on their investment, but only barely – their Arm investment has significantly underperformed relative to the broader technology industry. The deal will see SoftBank receive $12 billion in cash, along with $21.5 billion in NVIDIA stock. That transaction will give SoftBank a relatively sizable ownership stake in NVIDIA, though according to the companies the total stake is expected to be under 10 percent. Finally, the remaining $6.5B valuation of the deal will come from a further $1.5B in equity that NVIDIA will be paying out to Arm employees, as well as a $5B “earn-out” payment to be paid if Arm meets certain financial targets. 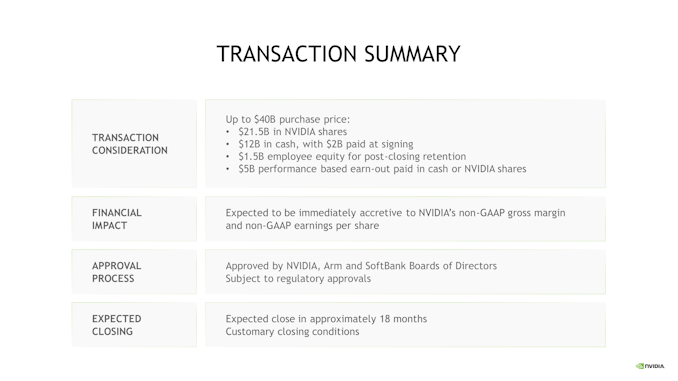 As for NVIDIA, the Arm acquisition marks their largest acquisition to date, easily eclipsing the Mellanox acquisition that closed just a short few months ago. Over the last half-decade NVIDIA has undergone significant growth – both in regards to revenue and market capitalization – thanks in big part to NVIDIA’s newfound success in the server and datacenter market with their deep learning accelerators. While the company is well off of its 52-week high that it set earlier this month, NVIDIA now has a sizable $330B market cap that they are leveraging to make this deal possible.

And according to the company, it’s that success in the server market that is driving their interest in and plans for Arm. NVIDIA expects the server market to remain a high-growth opportunity, and that by acquiring Arm they can leverage Arm’s recent success with Neoverse and other server products to reach an even bigger chunk of that market. 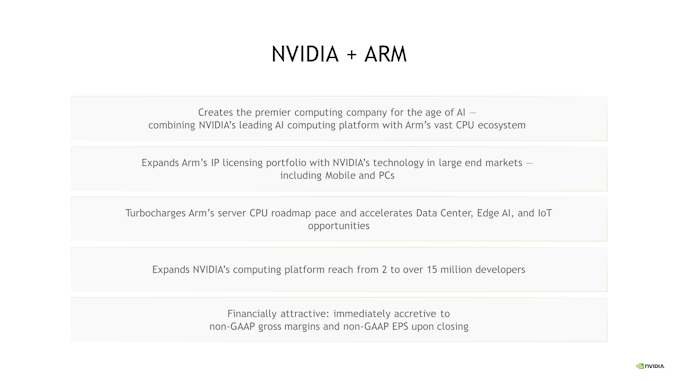 To be sure, NVIDIA isn’t announcing any specific hardware plans today – the deal is easily still a year and a half off from closing – but NVIDIA has made it clear that following their success in the GPU/accelerator and networking markets, they see Arm as the perfect complement to their current product lineup, giving them a capable CPU architecture to round-out their technology portfolio. Even with Arm, NVIDIA will not be capable of complete vertical integration, but while the company today still has to rely on third-party vendors (e.g. AMD and Intel) for some of the most important silicon that goes into servers incorporating their accelerators, with an Arm-based server CPU, NVIDIA can offer a nearly complete package on its own. 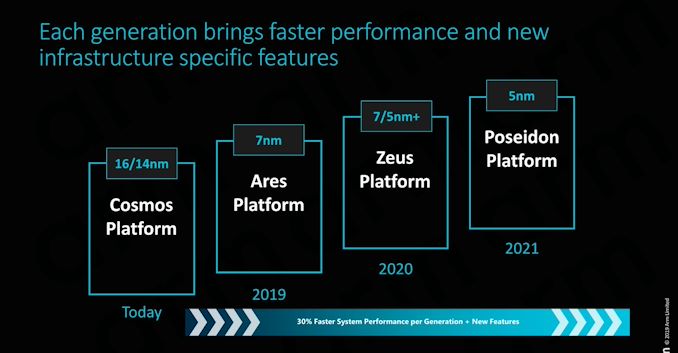 Of course, Arm is more than just a server CPU designer; the company has its fingers in everything from toasters to supercomputers thanks to its very broad range of IP, and any discussion about acquiring Arm has to include what happens to those businesses. Arm’s core business is licensing IP, and NVIDIA is telling the public (and partners) that this won’t change – that the company will continue to license out IP to other companies. The rationale for this is multifaceted – NVIDIA needs to win over everyone from regulators to customers to investors – but at the end of the day the company is in no position to compete with a lot of Arm’s customers, nor would they want to. Even in the server space NVIDIA couldn’t hope to address everything from microservers to supercomputers, never mind embedded controllers and smartphones. So NVIDIA is taking a complementary approach to the acquisition, using Arm’s server technology to augment their own, all the while continuing to license out IP.

In fact, the company is looking at growing the amount of IP that Arm licenses by including IP currently held by NVIDIA; technologies such as GPUs, AI accelerators, and network processors. It’s an idea that NVIDIA has played around with once before without much success, but Arm comes with a much better business model and much more experience in licensing than NVIIDA ever had. Just what this expansion entails remains to be seen, but the obvious routes include licensing out GeForce graphics IP for use in SoCs (potentially replacing Arm’s Mali offerings), as well as licensing out bits and pieces of NVIDIA’s tensor core and InfiniBand technologies. 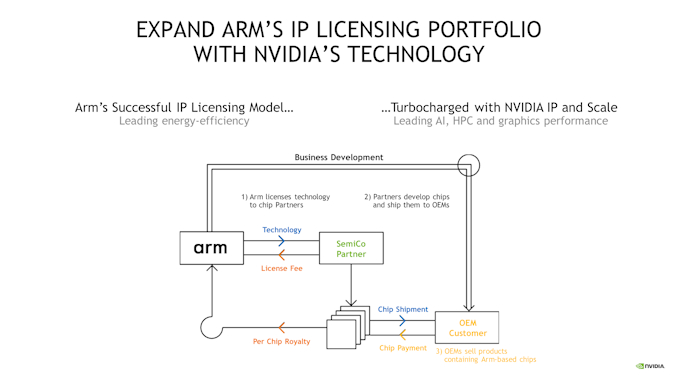 Still, NVIDIA knows that they face an uphill battle in convincing Arm’s traditional customers that NVIDIA has their best interests at heart. The Arm deal is less than desirable for the industry as a whole, as Arm has traditionally only sold IP and related core designs, remaining fully divorced from full-scale chip design and sales. However with SoftBank seemingly set on selling Arm, there are few companies in a position to buy Arm, and even fewer that would be willing to take it on-board as a long-term investment. Ultimately, Arm being acquired by a chipmaker makes for strange bedfellows all around, and it falls on NVIDIA to convince customers that their acquisition of Arm will help the ecosystem by combining the companies engineering resources, and that they are earnest about continuing to design and sell top-shelf IP that other companies – even NVIDIA’s competitors – will get reasonable access to. 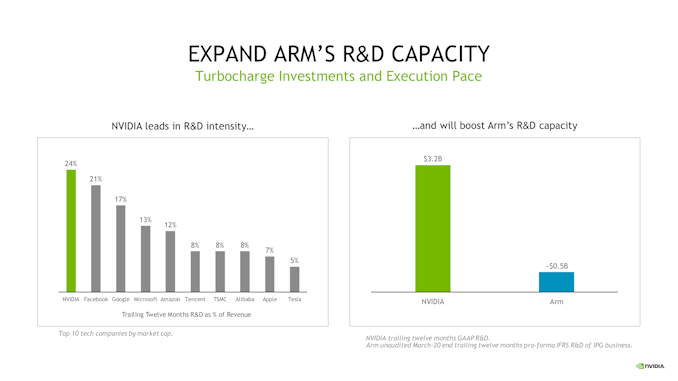 The other (and perhaps more immediate) challenge for NVIDIA is convincing regulators across the globe to approve the deal. NVIDIA is pitching the deal as being complementary, combining two companies that otherwise have minimal overlap. None the less, minimal is not the same as “none”, and besides the immediate and obvious overlap with Mali and GeForce GPU technologies, regulators will no doubt take a great deal of interest in the future of IP licensing. The smartphone revolution of the past decade and a half has been built on top of Arm architectures – never mind the billions of devices with Arm-based microcontrollers – so many parties have a vested interest in keeping that going.

To that end, while NVIDIA is just starting discussions with regulators – the deal was secret and not being discussed with partners nor regulators until this evening – the company is already making concessions and guarantees to the British government to get its approval. This includes committing to keeping Arm headquartered in Cambridge, and continuing to do a significant amount of their engineering work there. The company is also announcing that they will be building one of their AI “centers of excellence” in Cambridge. Besides providing an environment for cutting-edge AI research and training, NVIDIA will be building an Arm & NVIDIA-powered supercomputer at the site. While specific plans for the supercomputer are not being announced, the company recently finished building the world’s 7th-fastest supercomputer, Selene, using its DGX Pod infrastructure, so NVIDIA has significant capabilities here.

Otherwise, no such overtures have been made to the US or China, however the situations in those countries are very different since they are not Arm’s traditional home. What (if anything) NVIDIA will need to do to sell regulators in those countries remains to be seen, but it’s worth noting that nothing about this deal resolves the current export impasse with China; even after the deal closes, Arm will still face the same restricts in exporting its technology to China. 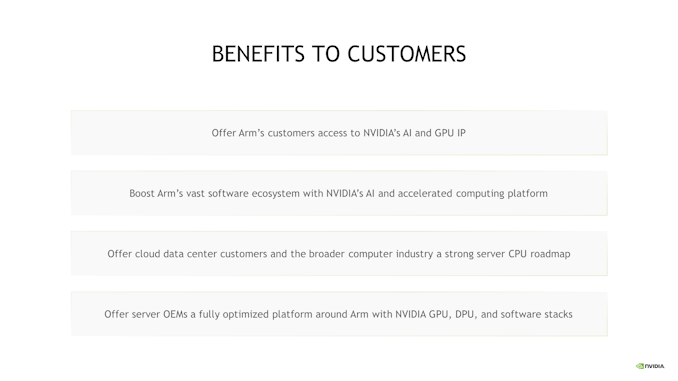 Finally, while this deal will see NVIDIA buying Arm wholesale, the two companies have confirmed that Arm’s ongoing efforts to sell off its IoT Services Group will continue. As a non-IP business NVIDIA has no interest in it, and as a result it will still be spun-off.

Ultimately, the Arm deal will be a significant shift in the industry, one far bigger than the $40 billion price tag indicates. In one form or another, Arm and its IP are at the heart of billions of chips sold every year, a reach that few other companies can match. For NVIDIA, acquiring Arm will cement their position as a top-tier chip designer, all the while giving them an even larger technology portfolio to go after the server market, and new opportunities to sell IP to other vendors. But true success will likely hinge on how well NVIDIA can court the rest of the technology industry: Arm’s reach is only as big as its customers, and so it’s up to NVIDIA to convince it’s customers that they can still count on Arm’s neutrality even after the change in ownership.