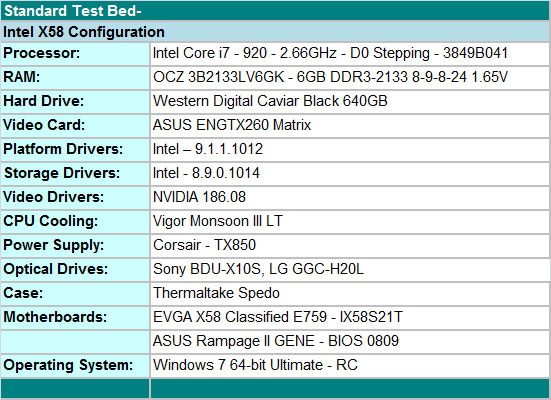 Our motherboard choice will seem strange to some but we wanted to see how these kits would operate on a board not known for high memory clocks. In fact, up until the latest BIOS release (0809), we grimaced when testing it. Fortunately, the Rampage II GENE has no problem with high memory clocks (up to 2200) now, other than VTT (QPI) voltage requirements are still higher than the mainstream DFI or EVGA X58 boards. Other than our switch to Windows 7 64-bit, the balance of the components are what we have utilized in past articles. Our software setup does not include any optimizations beyond setting the Windows swap file to 2048MB and clearing the prefetch folder before each benchmark. 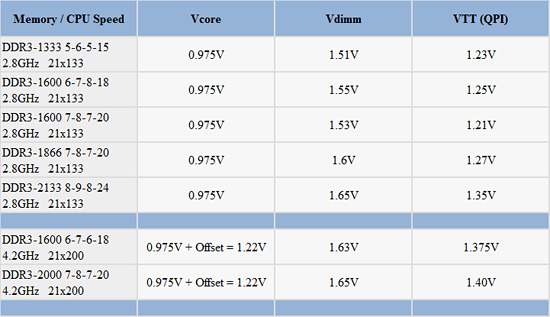 The OCZ Blade 2133 runs exactly at specified voltages on the Rampage II GENE motherboard without a problem. Our testing included everything from looping Prime 95 to multitasking exercises with FarCry 2, Sony Vegas Pro 9.0, and iTunes all performing at the same time in grueling five minute loop sequences. Of course, considering the processor was running at stock speeds, we expected nothing else but perfection from this setup. We actually noticed lower Core VID, VDimm, and VTT rates on the DFI and EVGA boards, but these results are in alignment with most X58 motherboards.

In our overclock tests, we set the system up based on what is fast becoming a standard setting for most D0 stepping processors and air cooling. The 21x200 setting results in a 4.2GHz core speed at 1.22V Core Vid (1.2V under full load) and idle voltages around 0.975V on the GENE board. We limited our memory clocks based on 1.65V VDimm and 1.40V VTT and then dialed in our best timings. I know, no fun here, but we will get to that in our full review.

On a side note, there has been a lot of discussion about what determines memory stability. The way we look at it, if all of your applications run without errors from both a program and data perspective, then chances are you have achieved memory stability on your particular system. We always start with MemTest + as our basis and then work from that point. In these particular tests, especially with the clocking results on the Classified, we would obtain "stability" in multi-instance SPi 32M and Prime 95 Blend (small or large FFTs also) only to watch Sony Vegas Pro 9.0 64-bit or Photoshop CS4 64-bit or various games like Crysis Warhead fail on the first loop and vice versa.

In fact, after spending three days dialing in these numbers on both boards, I see a great advantage to just running at stock memory speeds and timings except for benchmarking exercises. The effort required for an extra second advantage in transcoding or a single frame rate increase in a game is not worth the trouble or potential platform instability for most users. 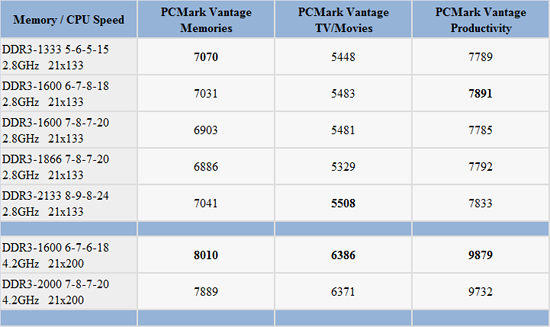 We utilized the three test suites out of PCMark Vantage x64 that typically respond well to either memory latency (Memories/Productivity) or bandwidth (TV/Movies). In addition, the TV/Movies test suite is extremely harsh on the platform as a whole. Our test results follow a familiar pattern in this benchmark with the latency sensitive Memories test seeing the 1333 C5 in the lead, the bandwidth sensitive TV/Movies suite taking advantage of the 2133 C8 setup, and the Productivity test responding well to the balanced 1600 C6 setting. The DDR3-1600 C6 setup offered the best overall performance although any performance differences are nearly impossible to detect during application usage. Expect to see many of these same results in our upcoming memory platform articles as memory speed and synthetic memory bandwidth measurements are not always the best indicator of platform performance.

In our overclocked results, the low latency advantage (includes various sub-timings from tFAW to RTL) of the DDR3-1600 C6 setup offers slightly better performance than the bandwidth advantaged DDR3-2000 C7 platform. If it were our money, finding memory capable of low latency DDR3-1600 will generally provide the best overall application performance at lower voltages for the enthusiast whether you are idling at stock core speeds or overclocking at the limits of air or water cooling. Of course, nobody in their right mind should ever run a DDR3-2000+ kit on a stock system, nor do we really suggest DDR3-1600 for people who will never touch the BIOS. For the majority of us, DDR3-1333 C7 offers more than acceptable performance on the i7 platform at a great price to boot. 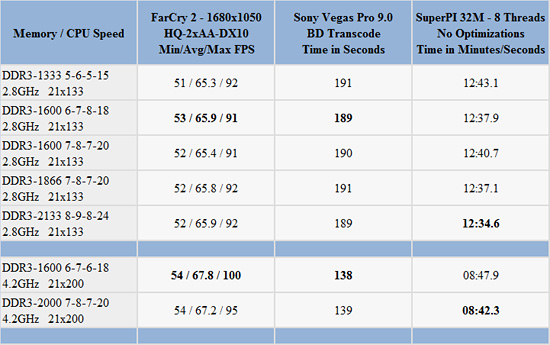 The DDR3-1600 6-7-6-18 setup continues to show an advantage over the other memory settings in our game and transcoding applications, although the differences are once again very small. We finally arrive at the one of the reasons as to why the memory manufacturers are always pushing the boundaries of both clock speeds and latencies. The answer is really simple, it is all about marketing and having a flagship product that does well in a handful of benchmarks utilized by the overclocking community. Besides AquaMark 3 and the various 3DMarks, there is one benchmark that seems to be universally accepted for both determining benchmark abilities along with platform speed (regardless if it is a true indicator or not) and that is Super Pi.

We do not harbor any personal animosities against these benchmarks. In fact, the constant drive by the various manufacturers to improve performance eventually benefits everyone. For that reason we are grateful for those who constantly push the boundaries. It is just that we like to take a pragmatic approach at times when it comes to these types of products. Based on the initial Super Pi results and offline testing in AquaMark 3 and 3DMark 2001SE, it is obvious that greater bandwidth continues to reign and if you can improve latencies, even more so. Of course, those slight but obvious improvements for improved benchmark scores are going to cost you an additional $400 or so.  However, for this crowd that price difference probably seems like a drop in the bucket in their quest to improve performance at any cost.

Our limited testing does not provide a full scope on the actual capabilities of the OCZ Blade 2133 memory kit. That will have to wait until we can properly test it in an environment more befitting its purpose. Its purpose of course is to allow the hardcore overclocker to set new records or reach milestones that were not possible before. From our initial tests, it is obvious this kit will be extremely competitive with the Corsair Dominator GT and GSkill Perfect Storm DDR3-2000 C7 kits. What is not obvious at this time is just how much better this kit is than its competitors or even OCZ's own Blade DDR3-2000 C7 kit. For now, we can run this particular sample kit at lower voltages and at higher speeds than our other DDR3-2000 kits on air-cooling. Just how much advantage it retains on a system setup for benchmarking is something we will answer shortly.