Kicking the Tires of the ASUS X72D

It's unfortunate that a journey around the ASUS X72D is going to reveal something that's large for large's sake. Don't misunderstand me: as an owner of a 17.3" notebook I can definitely appreciate the basic benefits inherent in a notebook being simply larger. You'll see that ASUS hasn't taken the best advantage of the space available, though.

Starting where we usually do—with the lid—we find the traditional "black" glossy plastic with a silver ASUS logo in the center. If you look closely you can see a small sort of thatched diamond pattern on a dark brown background that's almost too subtle by half; overall the lid is attractive but not exciting. If they're going to put glossy plastic anywhere it might as well be here, but we still pine for the day when glossy plastic goes the way of the dinosaur.

Unfortunately ASUS continues to employ glossy plastic on the screen bezel, one of the worst places to put it. Glossy screen finishes are already reflection prone, but putting glossy plastic—even if it's black—around the bezel just exacerbates things, and that's ignoring the fact that the bezel is going to be one of the first places to pick up loads of fingerprints. It's not completely unattractive, but it also isn't exactly practical either. A minor gripe, but one we've had to repeat a few too many times.

Mercifully the body of the notebook is devoid of gloss, excepting the black plastic between the keys on the chiclet keyboard. The majority of the inside surface is a textured matte plastic that makes for a comfortable place to rest your wrists. It's brown, an unusual color for a notebook, but the color is very dark and doesn't call attention to itself. As a whole, it's not very exciting looking but not an eyesore either: the surface is functional and gets the job done. 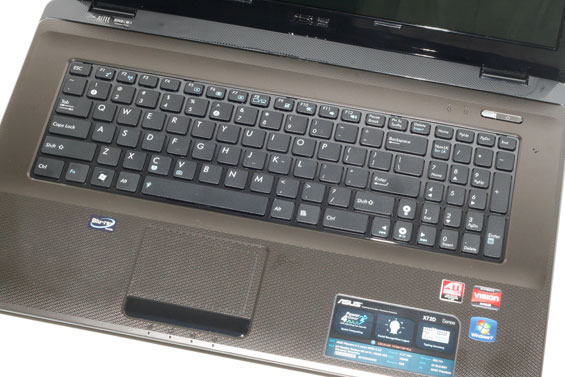 As for the keyboard, I'm a fan of the chiclet style and ASUS has a decent implementation here. There's some flex if you push hard on the center but for basic typing it isn't bad at all. We'd prefer no flex at all, but minimal is adequate. I would like to make a request, though: the ASUS style keyboards with 10-key are too crowded. There's ample room on this chassis to stretch things out and give the number pad a full-sized zero key instead of letting it get cut in half by the right arrow key. This isn't a major gripe, but real estate has been left on the table that could've been better used. As is becoming customary, all of the X72D's shortcuts are Fn key combos, including the media, volume, and wireless controls.

The touchpad, on the other hand, suffers from the same problem I noted in the U35Jc review. While it's not horrible to use, it has the same texture as the rest of the palm rest, just indented, and again ASUS is employing a single mouse button that acts as a rocker switch for the left and right mouse buttons. These are minor issues—the touchpad is plenty functional—but they're still problems that we'd like to see addressed in future designs. Integrating the touchpad into the rest of the surface shell is always going to look and feel incredibly chintzy and cheap, and this is something that could be remedied at minor expense.

When you get to the remainder of the body, you're going to be somewhat disappointed. As I mentioned on the previous page, the port selection is ample but still missing any kind of high speed connection for external storage. Port placement is at least logical, but there's a big chunk on the front of the right side that's just blank plastic, and this is space where additional expansion—say an ExpressCard slot or the media card reader—could have gone. Alternatively, the headphone jacks could also have been moved up. It's minor, but indicative of a feeling that ASUS hasn't made the best use of the space that comes with a notebook in this form factor.

Another disappointment comes when you pop the expansion panel off of the bottom of the X72D. The hard disk bay and memory slots are accounted for, but most of the wireless NIC is covered and inaccessible. An enterprising user might find a way to upgrade the processor through here, but the real disappointment is the lack of a second hard disk bay. There's space in this build for it: the actual processor, northbridge, and GPU are all covered by a single copper heatpipe that exhausts out of the left side of the notebook, resulting in a very compact heat zone. As you'll see later, this cooling design isn't the most efficient one either. Simply stated, ASUS could've done better with the X72D given the size of the chassis.