The New 2011 iMacs: Specs and Details

On the entry-level iMac, the 256MB Mobility Radeon HD 4670 has been replaced by a 512MB Radeon HD 6750M – you get double the graphics memory, a switch from GDDR3 to GDDR5, DirectX 11, OpenGL 4.1, and OpenCL 1.1, as well as Eyefinity+ and UVD3 and the other Radeon 6000-series niceties. For gamers, this should substantially improve performance, especially if you’re interested in trying to game at the 21.5” iMac’s native 1920x1080 resolution.

Moving up the chain to higher-end models, the 512MB 6770M isn’t as big a step up from the previous generation’s 512MB Mobility Radeon 5670 – like the desktop cards, the 6770M is essentially a higher-clocked and gently tweaked revision of its previous-generation counterpart, and higher clocks are likewise all that separate it from the 6750M. You pick up UVD3, but a lot of the on-paper specs are the same. It’s still an improvement over the previous generation, but compared to the low end and (as we’ll see) the high end, it’s not as substantial.

For the 27” models with two Thunderbolt ports, the 6000-series GPUs will also enable the use of three displays simultaneously, which will be handy for the Final Cut and Photoshop junkies who often invest in the higher-end iMacs.

The last thing I want to talk about is the subtle factor looming over these refreshed computers: Lion. 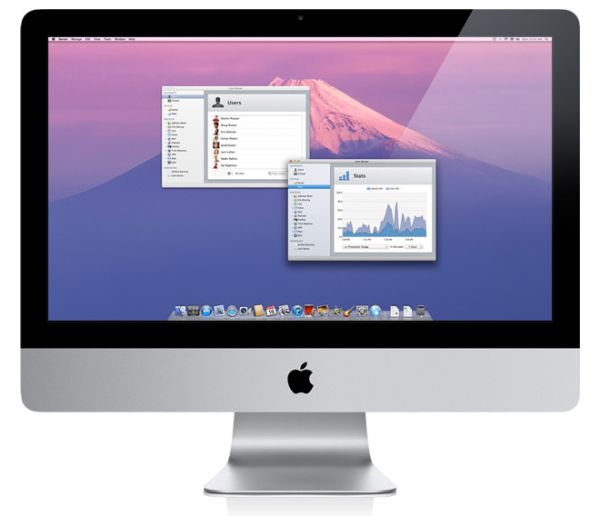 OS X 10.7 is supposed to bring a lot of iOS features “back to the Mac” when it releases this summer, and since these Sandy Bridge Macs are going to be the first computers the new OS ships on, we’re seeing some preparation for it on the hardware end.

To drive the iOS inspired touch enabled features, each new iMac can come bundled with either the touch-enabled Magic Mouse or the Magic Trackpad at no extra cost (it’s your choice – the Magic Mouse is the default option). The vanilla Apple Mouse is still a selectable option, but will save you no money compared to its touch-enabled counterparts, which are more expensive at retail.

Apple is also beginning to push SSDs in its laptops to replicate the quick boot and shutdown times of iOS, and we’re beginning to see that in the new iMacs – while none of the computers include an SSD by default, you can configure all but the entry level to include a 256GB SSD as either the primary hard drive or a secondary drive. Characteristically, Apple hasn’t posted anything about the manufacturer of this drive or its controller – Apple uses Toshiba SSDs in the Sandy Bridge MacBook Pros, and recently switched to Samsung SSDs for the MacBook Airs, but there’s really no telling exactly what these iMacs are packing until it’s in your hands.

To replace the mechanical hard drive with a 256GB SSD costs a whopping $500 ($600 to get the SSD and keep the mechanical hard drive as well), though that’s not too far above the market price for an SSD at this capacity. Also note that, at this point, TRIM only seems to be enabled in OS X for SSDs direct from Apple – even if you can put in an SSD as an aftermarket upgrade, you may not be as satisfied with its performance. This may change in Lion, but we have no solid evidence to that effect.

With this refresh, Apple has done what Apple typically does: offer faster hardware in a similar physical package while maintaining price points across the board. Quad core processors and beefier dedicated GPUs make these better buys, relatively speaking, than last year’s models, but the iMac is still the iMac: a midrange-to-high-performance all-in-one with a high-quality display. Today’s upgrades do nothing to change the iMac lineup on a fundamental level.

That is to say, if you were in the market for an iMac already, congratulations! Today’s iMac is faster and more capable than yesterday’s iMac on all fronts. If an iMac isn’t what would best suit your purposes, though, today’s update won’t do much to change your mind unless you were looking for better gaming performance on the low and high ends.

For more about the nitty-gritty on the new iMac's performance and internals, keep an eye out for our in-depth review in the coming weeks.