The Edge will be pretty familiar to anyone who has seen or spent any time with Razer systems in the past – consider a tablet with the same design language as the Blade and you’ll be on the right track. Like the Blade that came before it, the design is clean and understated. The matte black anodized aluminum chassis looks actually like a shrunken version of the Blade lid, with the same vertical ridges flanking a glowing green Razer logo. The edges are all radiused, with two large vents on the right and left sides of the top edge (intake on the left, exhaust on the right). The sides of the tablet are unadorned, while the bottom has the dock/power connector located in the center and a pair of speakers located at the corners. The top edge of the tablet has buttons for power, keyboard, rotation, and volume, as well as a 3.5mm combo jack and a USB 3.0 port accented in the traditional Razer green. The front face is completely clean other than the webcam at the top and the circular Windows button located just under the display. 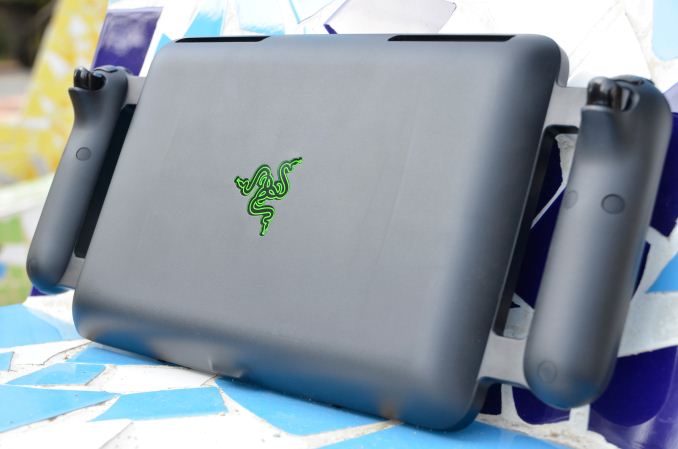 When you first pick it up, it seems pretty antithetical to the slim ARM-based tablets that we’ve gotten used to over the last few years. Even Intel-based tablets like Surface Pro have tried really hard to reach that level of thinness, but the Edge practically flaunts its chunky design. The thickness isn’t the problem I thought it would be going into the review, because quite honestly, the size doesn’t make it uncomfortable to use. The curved sides make for a good in-hand feel, and the Edge feels more comfortable than Surface Pro does. My biggest issue with Surface Pro is that it felt really heavy, but because the Edge weighs just as much and has a significantly larger chassis, it doesn’t have that same dense feel to it. The ridges on the back also play into the in-hand feel, the subtle curvature acts almost like a grip that helps you hold the tablet. It just has a nice, solid, reassuring feel to it when you pick it up.

Razer made a big deal out of the speakers when I last saw the Edge at CES. Tablet audio has been overlooked for the last few years, though it’s finally starting to get its share of attention. The Edge has enough room in the chassis to pack a pair of surprisingly good stereo speakers. Any time you get solid midrange and any semblance of bass out of a tablet or ultrabook, you should be thrilled – it doesn’t happen very often. The speakers on the Edge are clearly and distinctly louder and more defined than any tablet or ultrabook I’ve spent time with in recent times – iPad (even the mini, which has stereo speakers), Surface Pro, ATIV Smart PC and Smart PC Pro, Zenbook Prime, Aspire S7, you name it. They’re legitimately better than any other prominent device in this class. 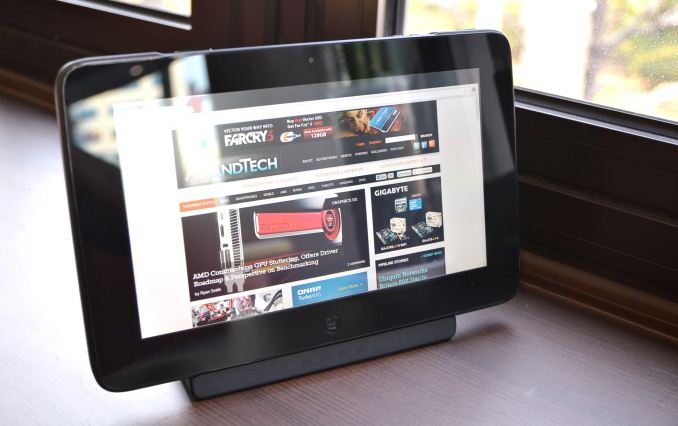 I have a couple of nits to pick with the design. The first is the bezel around the display – it’s huge. Tablets tend to have larger bezels than we like on notebooks, and the display edge gestures in Windows 8 also have a role to play here, but there’s something to be said for the elegance of a slim bezel. The Edge has a bezel that’s just over an inch wide all the way around. That’s pretty substantial, even compared to the healthy 0.75” width of the iPad’s bezel. The generous bezel means that you’re never worried about accidentally touching the display, but I’d like to see a display closer in size to Surface’s 10.6” panel in this same size chassis. I’m not sure how feasible it is for a company like Razer to get a somewhat irregularly sized panel, though. I’d also be interested in seeing how much bigger the chassis would need to be to fit an 11.6” display, and I’m sure John Wilson and his team kicked that idea around before settling on the 10.1” panel. It’s clear that the ideal display size for Windows tablets is somewhere between 10.1” and 11.6”, so it’ll be interesting to see if more manufacturers take Microsoft’s lead and start shipping devices later this year with displays in the 10.6”-11.1” range. 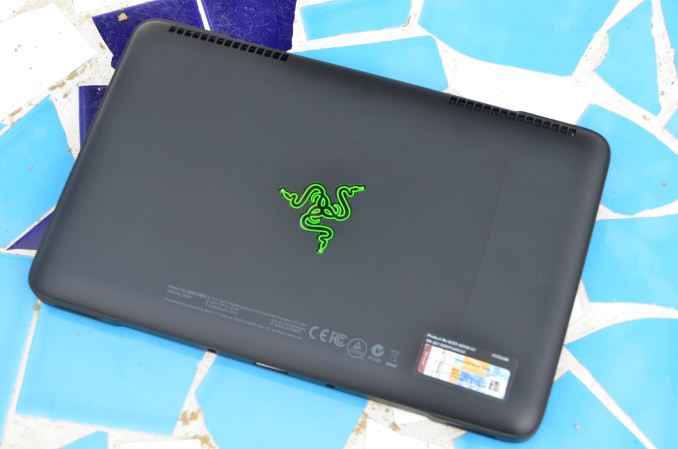 The other is the Windows sticker on the back – I think they’d have been better off integrating that into the power brick the way ASUS has been doing with their design-oriented systems for some time now. Perhaps I was spoiled by the sleekness of the Blade’s 120W brick, but in comparison the off-the-shelf Chicony 65W AC adapter is ugly and looks like a cheap touch on an otherwise very polished product. I’d like to see something slimmer, like a downsized version of the Blade adapter, with the product stickers integrated to really complete the clean aesthetic the rest of the device has.