Enterprise hard drives such as the WD Re and WD Se come with features such as real time linear and rotational vibration correction, dual actuators to improve head positional accuracy, multi-axis shock sensors to detect and compensate for shock events and dynamic fly-height technology for increasing data access reliability. For the consumer NAS versions, Western Digital incorporates some features in firmware under the NASWare moniker, while Seagate has NASWorks. We have already covered some of these features in our WD Red review last year. These hard drives also expose some of their interesting firmware aspects through their SATA controller, but, before looking into those, let us compare the specifications of the four drives being considered today.

Some of the interesting aspects are highlighted in bold above. The Seagate model enjoys a 500 rpm advantage in rotational speed. So, it shouldn't be a surprise if it comes out in front in some of the benchmarks. It may also mean that the Seagate NAS HDD consumes more power compared to the WD Red. Seagate also rates the number of load / unload cycles at 600K for the NAS HDD (same as the WD Re). The WD Re and WD Se 4 TB versions weigh 750 grams each and they use five 800 GB platters. The WD Red weighs in at 680 g, but the Seagate NAS HDD (with four 1 TB platters) weighs only 610 g and comes in as the lightest of the lot. Considering the data at our disposal, it appears unlikely that the WD Red 4 TB has five platters, but, we have reached out to Western Digital to confirm the platter density in the unit (Update: WD got back to us with confirmation that the WD Red 4 TB version has four 1 TB platters). 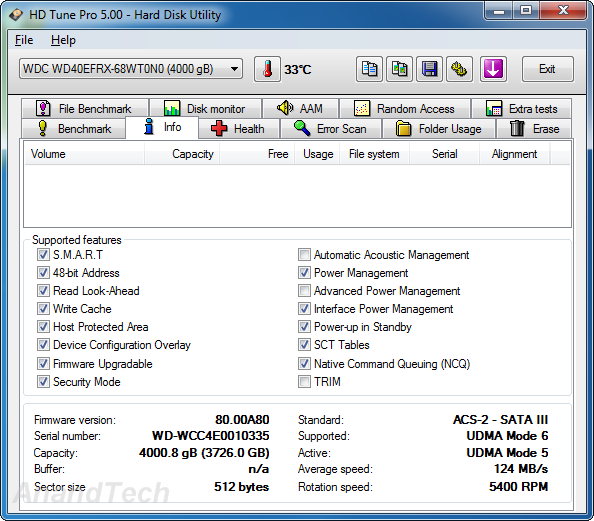 The WD Red supports interface power management (termed as HIPM or DIPM depending on whether the power management to alter the status of the SATA link is initiated by the device or the host), but not advanced power management (APM), while the Seagate NAS HDD supports APM, but not HIPM / DIPM. APM allows setting of the head parking interval. As we saw in the WD Red 3 TB review, APM support is available only through proprietary commands using the WDIDLE tool. By default, it is disabled, which is fine considering the target market for the drives. The Seagate drive, on the other hand, makes it possible for the NAS OS to set the head parking interval. HIPM / DIPM allows further fine-tuning of power consumption, and it is a pity that the Seagate NAS HDD doesn't support it. In terms of the supported features above, the WD Re and Seagate NAS HDD are the same. The WD Se differs from the WD Re / Seagate NAS HDD in the fact that device configuration overlay (DCO) is not supported. DCO allows for the hard drive to report modified drive parameters to the host. It is not a big concern for most applications.

We get a better idea of the supported features using FinalWire's AIDA64 system report. The table below summarizes the extra information generated by AIDA64 (that is not already provided by HD Tune Pro).

Interesting aspects are highlighted in the above table. The extended power conditions (EPC) supported in the enterprise drives (WD Se / WD Re) allow for more power states than the usual parked head / spun down disks. These may include states where the electronics is switched off, the heads are unloaded, the disks are spinning at a reduced rpm and where the motor is completely stopped (or any valid combination thereof). This provies for more fine-tuned tradeoffs between performance (in terms of latency) and power consumption. NCQ priority information adds priority to data in complex workload environments. While WD seems to have it enabled on all its NAS drives, Seagate seems to believe it is unnecessary in the Seagate NAS HDD's target market. A surprising finding in the above run was the fact that the two enterprise drives from WD don't support the NCQ streaming feature which enables isochronous data transfers for multimedia streams while also improving performance of lower priority transfers. This feature could be very useful for media server and video editing use-cases. Fortunately, both the WD Red and Seagate NAS HDD support this feature.