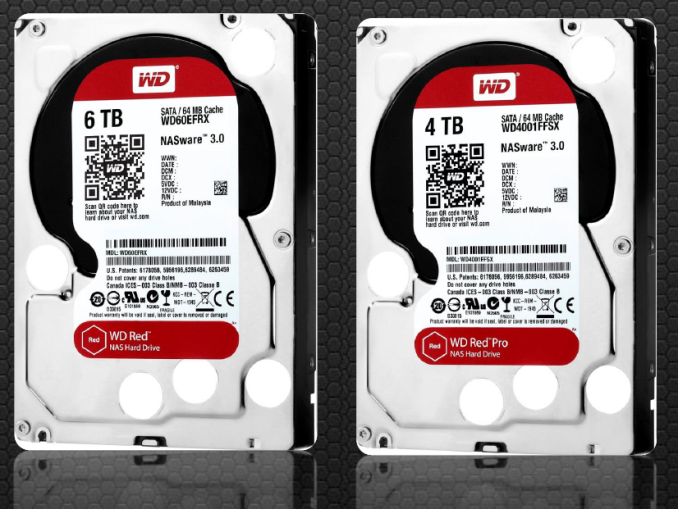 Back in July 2012, Western Digital began the trend of hard drive manufacturers bringing out dedicated units for the burgeoning NAS market with the 3.5" Red hard drive lineup. They specifically catered to units having 1-5 bays. The firmware was tuned for 24x7 operation in SOHO and consumer NAS units. 1 TB, 2 TB and 3 TB versions were made available at launch. Later, Seagate also jumped into the fray with a hard drive series carrying similar firmware features. Their differentiating aspect was the availability of a 4 TB version. Western Digital responded in September 2013 with their own 4 TB version (as well as a 2.5" lineup in capacities up to 1 TB).

Today, Western Digital is making updates to their Red lineup for the third straight year in a row. The Red lineup gets the following updates:

In addition, a new category is also being introduced, the Red Pro. Available in 2 - 4 TB capacities, this is targeted towards rackmount units with 8 - 16 bays (though nothing precludes it from use in tower form factor units with lower number of bays).

Even though 6 TB drives have been around (HGST introduced the Helium drives last November, while Seagate has been shipping Enterprise Capacity and Desktop HDD 6 TB versions for a few months now), Western Digital is the first to claim a NAS-specific 6 TB drive. The updated firmware (NASware 3.0) puts in some features related to vibration compensation, which allows the Red drives to now be used in 1 - 8 bay desktop NAS systems (earlier versions were officially sanctioned only for 1 - 5 bay units). NASware 3.0 also has some new features to help with data integrity protection in case of power loss. The unfortunate aspect here is that units with NASware 2.0 can't be upgraded to NASware 3.0 (since NASware 3.0 requires some recalibration of internal components that can only be done in the factory).

The 6 TB version of the WD Red has 5 platters, which makes it the first drive we have seen to have an areal density of more than 1 TB/platter (1.2 TB/platter in this case). This areal density increase is achieved using the plain old Perpendicular Magnetic Recording (PMR) technology. Western Digital has not yet found reason to move to any of the new technologies such as SMR (Shingled Magnetic Recording), HAMR (Heat-assisted Magnetic Recording) or Helium-filling for the WD Red lineup.The 5 TB and 6 TB versions also have WD's StableTrac technology (securing of the motor shaft at both ends in order to minimize vibration). As usual, the drive comes with a 3 year warranty. Other aspects such as the rotation speed, buffer capacity and qualification process remain the same as that of the previous generation units.

The Red Pro targets medium and large business NAS systems which require more performance by moving to a rotation speed of 7200 rpm. Like the enterprise drives, the Red Pro comes with hardware-assisted vibration compensation, undergoes extended thermal burn-in testing and carries a 5-year warranty. 2, 3 and 4 TB versions are available, with the 4 TB version being a five platter design (800 GB/platter).

The WD Green drives are also getting a capacity boost to 5 TB and 6 TB. WD also specifically mentioned that their in-house NAS and DAS units (My Cloud EX2 / EX4, My Book Duo etc.) are also getting new models with these higher capacity drives pre-installed. The MSRPs for the newly introduced drives are provided below

We do have review units of both the 6 TB WD Red and the 4 TB WD Red Pro. Look out for the hands-on coverage in the reviews section over the next couple of weeks.