Closing the Performance Gap with Desktops 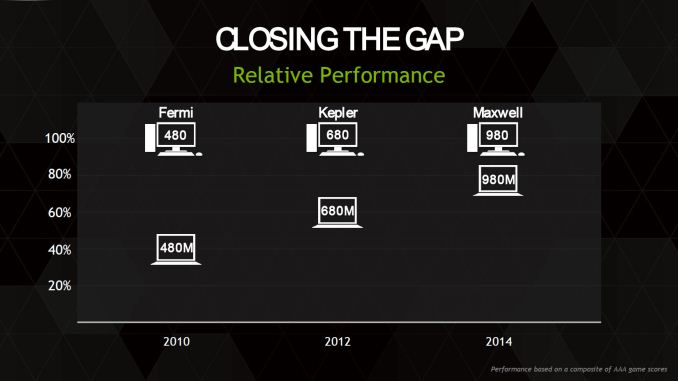 That brings us to today's launch of the GTX 980M/970M. You might say that there have been patterns emerging over the past few years that hint where NVIDIA is going – e.g. Kepler GK107 first launched on laptops back in March 2012, with desktop GPUs coming a month later – but the higher performance parts have almost always been desktop first and mobile several months later, with at best 50-65% of the performance. Now just one month after NVIDIA launched the GTX 980 and 970, they're bringing out the mobile counterparts. What's more, while the mobile chips are yet again cut-down versions of the desktop GPUs, clocks are still pretty aggressive and NVIDIA claims the 980M will deliver around 75% of the performance of the GTX 980. Here's a look at the specifications of the new mobile GPUs.

The specifications are actually a bit of a surprise, as the core clocks on the 980M are right there with the desktop parts (though it may or may not boost as high). The 980M ends up with 75% of the CUDA cores of the GTX 980 while the memory clock is 29% lower. In terms of pure theoretical compute power, the 980M on paper is going to be 70-75% of the GTX 980. Of course that's only on paper, and actual gaming performance depends on several factors: GPU shader performance and GPU memory bandwidth are obviously important, but the CPU performance, resolution, settings, and choice of game are just as critical. In some games at some settings, the 980M is very likely to deliver more than 75% of the GTX 980's performance; other games and settings may end up closer to 70% or less of the desktop. Regardless, this is as close as NVIDIA has ever come to having their top notebook GPU match their top desktop GPU.

A big part of this is the focus on efficiency with Maxwell GM204. NVIDIA doesn't disclose TDP for their mobile parts, but the top mobile GPUs usually target 100W. NVIDIA went after efficiency in a big way with Maxwell 2, dropping TDP from 250W with GTX 780 Ti down to 165W with GTX 980, all while delivering a similar (often slightly better) level of performance. With further binning and refinements to help create a notebook GPU, the TDP target would be 60% of the GTX 980 and power requirements tend to scale quite a bit near the maximum stable clocks for any particular microprocessor. Reduce the memory clocks a bit and disable some of the SMM units and getting 75% of the performance with 60% of the power requirement shouldn't be too difficult to pull off.

Moving on to the GTX 970M, NVIDIA is still using GM204 but it has even more SMM units disabled leaving it with 1280 CUDA cores. The memory bus has also been dropped to a 192-bit interface, but with a slightly lower core clock and fewer cores to feed, the GTX 970M should do well with a 192-bit bus. The smaller memory bus also translates into less total memory this round, so NVIDIA isn't doing any asymmetrical memory interface on the 970M; it will have 3GB GDDR5 standard, with an option to go with 6GB. It's good to see the potential to get more than 3GB RAM, as we're already seeing a few games that are moving past that target.

In terms of theoretical compute performance (cores * clock speed), the GTX 980M will be about 30-35% faster than the GTX 970M in GPU-bound situations. If you're curious, the GTX 970M will also offer around 55-65% of the performance of the desktop GTX 970, so the second tier GPU ends up being closer to what we've seen with previous generations of NVIDIA mobile GPUs.

With the launch of the new GTX 970M and GTX 980M, it's also worth mentioning that NVIDIA is officially discontinuing some of the existing mobile parts. The current lineup of mobile GPUs from NVIDIA now consists of GeForce 820M, 830M, and 840M for the casual/less demanding market. The 820M is actually a Fermi-derived part, while 830M and 840M use GM108 with 256 and 384 cores, respectively. At the top of the product stack, the GTX 980M and 970M replace the GTX 880M and 870M, while GTX 860M and 850M continue as the "mainstream gaming" notebook GPUs; 860M also continues to be offered in two variants, a Maxwell GM107 version and a Kepler GK104 version, though the latter hasn't been widely used.