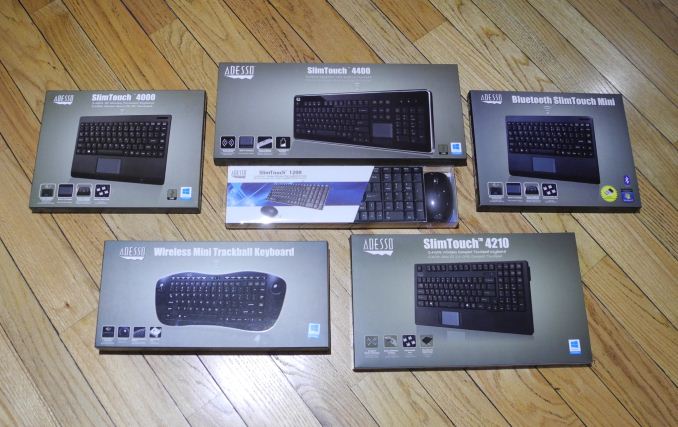 The cord-cutting trend has made streaming STBs (set-top boxes) and HTPCs (home theater PCs) popular. Remotes are bundled with all OTT (over-the-top) boxes and Android media streamers, and Media Center remotes are common for HTPCs. However, as media consumption becomes more interactive (for example, consumers explicitly searching for a movie to play on Netflix), the use of remotes with limited functionality becomes cumbersome. As an option for interacting with HTPCs, we pay attention to devices which fulfill the following criteria:

Some of the other desirable features include prolongation of battery life by going into sleep mode (either automatically, or through an explicit toggle switch), 5 GHz communication frequency (to avoid the crowded 2.4 GHz spectrum) and an integrated rechargeable battery with a charging dock. It would also be nice to have ease of use with Windows 8.x (in terms of replicating touchscreen functionality on a touchpad). Obviously, features have to be traded off to hit an acceptable price point. So, the options we want to look at might not hit any of the desirable features too.

The Logitech K400 is one of the most popular HTPC keyboards. Frequently available for less than $30, its feature-to-price ratio is simply unparalleled. Unfortunately, the keyboard does have a few drawbacks with respect to ergonomics and key placement, making it challenging to use it for extended typing duties. With a better budget, would it be possible to improve the HTPC interaction experience? That is what we hope to answer with our 'Interacting with HTPCs' series. Our first review in that category was our extended look at the options from IOGEAR and SIIG earlier this year.

In today's piece, we will be looking at the various interaction options from Adesso, with MSRPs ranging from $30 - $75:

In addition to the above five models, Adesso also sent us the SlimTouch WKB-4210UB. However, the sample had some issues with a stuck touchpad button and we will not cover that in this review. In addition, the batteries supplied with a couple of the samples were dead, but that doesn't have any bearing on the aspects that we will cover in the rest of the review.

We will first take a look at the features offered by each of these keyboards in detail along with some usage impressions. This will be followed by the comparison of the pros and cons of each of these units on a single page. Note that most of the aspects presented in keyboard reviews are subjective and dependent on test environment. For example, even the wireless range may vary from one test location to another because the 2.4 GHz channel being used might exhibit interference issues under certain conditions. This could result in improper functioning and range issues. While one unit relies on Bluetooth for communication, the other four are RF-based and operate in the 2.4 GHz band with an advertised range of 30 ft (under ideal conditions). We will not be covering the range factor any further in this review.