Build-A-Rig Round 1: The $1500 PCs and Interviews from Corsair and Zotac 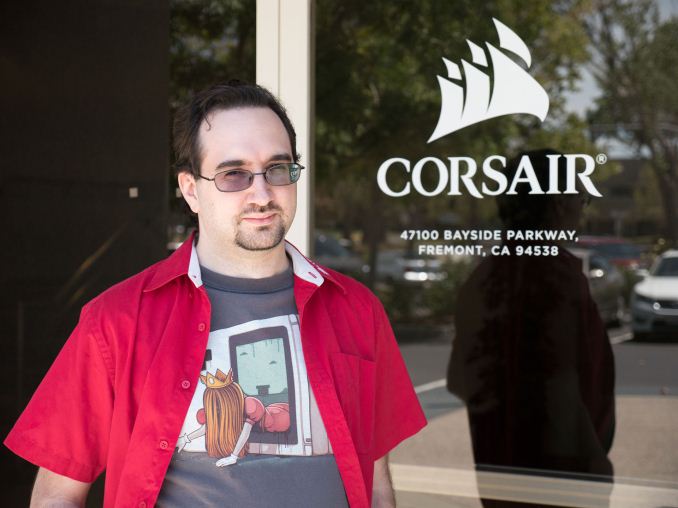 IC: How long have you been at Corsair?

DS: Since I left AnandTech! That means since October 2013.

IC: We approached Corsair about our Build-A-Rig initiative – what were your immediate thoughts about it?

DS: I’ve been wanting to do something like this with the press for a while, just because I’ll see a build competition or something and I tend to look at it and go ‘that’s not really how I would have done that’. So when I saw the initiative you guys had, I was onboard immediately.

IC: How do you feel about the competitive aspect?

DS: I like it – it doesn’t come across as super competitive and for us it gives us an opportunity to demonstrate that we, Corsair, are made up of enthusiasts. So if we can build a system that passes muster with the readership then that kind of demonstrates that we know what we’re talking about and we know who we are building for. As far as the competitive aspect goes, this industry is actually pretty small anyway so you’re going to end up having friends at different companies looking back and forth at each other anyhow.

IC: So we gave you a $1500 budget to build a system (including OS, but not a monitor or peripherals). How do you feel $1500 sits with the current market for gaming PCs?

DS: I think $1500 was fine! It was a little bit challenging because I had to do a bit of a balancing act with the system. The reality is that we were able to put together a helluva powerful gaming system for $1500. I think you could actually build a solid 1080p or 1440p system for a bit less than what we did.

IC: So are you saying you spent too much?

DS: It’s no secret that Corsair stuff tends to be a little bit more premium and a little bit more expensive. I think the value proposition is there but at the same time when you’re working on a $1500 budget you can’t quite put the fanciest stuff we have in there. But I ended up talking to my direct supervisor Jon Gerow, aka ‘JonnyGuru’, and I went back and forth with him about what direction we should go with this. We wound up deciding to ultimately build the best system we could for the end-user even if it meant using more entry-level Corsair components. It gives a chance to show that the entry level stuff is still really good. If we had gone all premium, such as DDR3-2400 and a fancier case, a faster/bigger SSD then it would have cost too much but I felt like the end-user experience really had to be there for the system and that even our more entry-level stuff was still up to the task.

IC: When you talk about the end-user experience of the system, does this mean that with your build (which you called ‘The Accelerator’) you are focusing purely on performance here over aesthetics or does it require a bit of both?

DS: Aesthetically I still think our build is pretty decent – the 200R is not an unattractive case. But I wanted to focus on designing a system that the end user would get a substantial amount of performance out of. So when you’re talking about doing a single monitor system for $1500, to me that means it has to scale all the way up to 4K. So we could have taken the hit on the graphics card, gone down to a GTX 980 (from the 980 Ti) and you would have had a great experience at 1080p or at 1440p but it would have started to quake in its boots at 4K. That would have let us put some fancier stuff elsewhere but ultimately we decided we had to have the overclockable i5, the 980 Ti, 16GB of DRAM – all these things needed to be there to scale to 4K. We knew we had to target the right performance profile so when the winner powers this thing on and starts playing games on it they’re going to feel like no expense has been spared.

DS: An enthusiast-slash-gamer, because there’s so much overlap in those categories, that is willing to overclock a little bit. We tried to facilitate that the best we could to maximize the performance we could get out of the system.

IC: Looking at the gaming market as a whole, eSports is still the biggest driver for gaming, and $1500 is vastly overkill for this type of gaming. With the comparison between the triple-A titles such as Witcher 3/Battlefield and eSports, how does Corsair as a company deal with this as a company strategy?

DS: Obviously we’re involved in eSports and we’re getting more involved, such as sponsoring Team Dignitas. To me the eSports and the triple-A markets are different beasts. On the eSports side the hardware performance may not be as important, such as League of Legends, DOTA 2 and CS:Go, where the game doesn’t necessarily tax the hardware as much. For our enthusiast market, these gamers aren’t too excited but our peripheral market is where they focus and we want to provide the best keyboard, the best mouse and the best headset. That’s the tack we take. Then the users who want the best home user experience and who do want to play the triple-A titles - so for example I hate to play anything less than the highest settings (anti-aliasing not withstanding) – so for those guys, that’s where we come in and we say that they can build a really stellar exceptionally high quality system using Corsair components and you can maximize your performance with high speed memory, with a fast SSD and especially if you’re an overclocker. To me we make some of the most attractive and most functional cases on the market; we have a sensational water cooling line and our power supplies are increasingly second-to-none, especially if you look at the recently released RM-i series. The two markets (eSports and AAA) are disparate to each other and we try to address both as best as we can.

IC: Do you feel that over time users cross over from the eSports into the enthusiast?

DS: I think so. Video games tend to perpetuate themselves so to speak – we have a bunch of guys in the office that will play CS:Go one minute then turn that off and play Far Cry 4, and those games offer very different experiences. CS:Go might not necessitate the high-end system, but Far Cry 4 sure as hell does.

IC: What’s the average age of the gamers in the office?

DS: Most of the people working on our enthusiast gear are all in their 30s. A couple of engineers tend to be in their 40s and 50s, but the electrical engineers need to be more experienced. But the overriding factor is that they are all still enthusiasts.

IC: So what system do you personally run?

DS: I built a liquid cooled system in a 750D last year and then upgraded it with Haswell-E. So I’m running a custom loop in the 750D with two GeForce GTX 980s, both overclocked. They’re both close to 1.5 GHz on the cores and with the memory near 8 GHz. Then I have an ASUS X99 Deluxe motherboard with an i7-5960X at about 4.4 GHz but at that point I found that the voltage required to get to 4.5 was even too much for the custom loop – it hits the limit of what the CPU can dissipate into the water block. This is all paired with four 480GB Corsair Neutron GTX SSDs in RAID-0 then a 512GB Force LX that is being used as my project drive. This is all powered by an AX860i 80PLUS Platinum power supply. So I mean it’s pretty tricked out, and then I’m running on a curved 34-inch 3440x1440 Samsung monitor. Recently I’ve been trying to go through Far Cry 4 and a little bit of Divinity: Original Sin. I might pick up Witcher 3 at some point, although the Witcher games were never really my thing. Far Cry 4 is the one I’ve pretty much been going at lately.

IC: Are there any titles that you are looking forward to over the next twelve months, especially that we’ve just had E3?

DS: I’m looking forward to SOMA (survival-action horror set for September) – I had a list of games but Final Fantasy VII Remake topped everything. Doom I’m really psyched about. With SOMA, it’s made by the same people who made Amnesia: Dark Descent, so these guys are really amazing at producing material that is really atmospheric. I’ve been tracking the development for a while so I’m really looking forward to it.

IC: Back to ‘The Accelerator’, if you were to have half the budget ($750) to invest in upgrades over the next twelve months, what would you do?

DS: I’m not sure – part of the reason we built it up the way we did was to make sure it was going to be in Beast mode and now that the Fury X reviews are trickling in and not as chart topping as one might have expected, the best thing you could probably do over the next few months is invest in a HG10 N980 bracket that we’re coming out with along with a H55 cooler to improve the GPU cooling. The instant you liquid cool Big Maxwell it takes the brakes off of it. The card just sings. That would probably be the biggest upgrade, but you could also get a storage drive. I don’t really see anything faster in the current market to necessitate a $750 upgrade – there’s the possibility that Skylake could go extremely fast, but on an IPC perspective you might only be looking at a 10%, maybe 15% increase tops, and that’s not really enough to make the CPU in the build (an i5-4690K) sweat. Realistically we tried to make this build essentially – well I mean you can’t future proof anything in this industry but you can have an idea of futureproofing and that’s kind of what we did.

IC: Given that you are the product manager for the Bulldog (Corsair’s high-end 4K gaming mini case), would you consider that as part of a $1500 gaming PC build?

DS: Yes, oh yes. The build that we were showing off at Computex would have cost about $2200 to put together – but that had a Titan X soaking up $450 right there, so you can save a bunch of money right there by honestly dropping the Titan X down to a 980 Ti and dropping the 480GB Neutron XT down to a 240GB Force LS and that would get you most of the way there.

Build-A-Rig Round 1: The $1500 PCs and Interviews from Corsair and Zotac Build-A-Rig R1: Corsair’s ‘The Accelerator’
Tweet
PRINT THIS ARTICLE
Comments Locked