In order to test the quality and consistency of a keyboard, we are using a texture analyser that is programmed to measure and display the actuation force of the standard keyboard keys. By measuring the actuation force of every key, the quality and consistency of the keyboard can be quantified. It can also reveal design issues, such as the larger keys being far softer to press than the main keys of the keyboard. The actuation force is measured in Centinewton (Cn). Some companies use another figure, gram-force (gf). The conversion formula is 1 Cn = 1.02 gf (i.e. they are about the same). A high quality keyboard should be as consistent as possible, with an average actuation force as near to the manufacturer's specs as possible and a disparity of less than ±10%. Greater differences are likely to be perceptible by users.

The machine we use for our testing is accurate enough to provide readings with a resolution of 0.1 Cn. For wider keys (e.g. Enter, Space Bar, etc.), the measurement is taking place at the center of the key, right above the switch. Note that large keys generally have a lower actuation force even if the actuation point is at the dead center of the key. This is natural, as the size and weight of the keycap reduces the required actuation force. For this reason, we do display the force required to actuate every key but we only use the results of the typical sized keys for our consistency calculations. Still, very low figures on medium sized keys, such as the Shift and Enter keys reveal design issues and can easily be perceptible by the user.

With a disparity of ± 7.5%, the ORIGIN PC BlackWidow Chroma is not the most consistent keyboard that we have ever tested, but the results are well within the acceptable limits and the differences between the main keys are highly unlikely to be perceptible by the users. The average actuation force is 50.7 Cn, very close to the 50 Cn rating of the switch. Do note that the stiffness of the particular switch slightly increases after the actuation point and more force, up to 60 Cn, is required for the keycap to bottom down. The force required to actuate the larger keys is lower, as the weight and size of the keycap assist with the pressing of the switch. This may not be very perceptible with the medium sized keys, such as the Enter and Shift keys, but it definitely is obvious with the Spacebar key, which feels much softer than any other key on the keyboard.

As the ORIGIN PC version of the BlackWidow Chroma is entirely identical to Razer's own product, ORIGIN is also distributing Razer's Synapse software along with the keyboard. Razer's software does recognize the keyboard as the "ORIGIN PC Edition" but, other than the small watermark at the lower left corner of the software, everything else remains identical.

The Razer Synapse is perhaps the only true limitation of the BlackWidow Chroma. Over a year ago, when we reviewed the BlackWidow Ultimate, the software was effective enough for that particular keyboard and showed a lot of promise. However, it would seem that the software did not evolve at all during the past year, while the competition has been working wonders with their own. Furthermore, downloading the software requires that the user sign up for a Razer Synapse account and go through email validation. One cannot simply download the software/drivers, install them and be done with it. Having a server account system does have its benefits, such as the saving of the programmed profiles to the cloud, but many feel that it intrudes their privacy. This has previously received the negative criticism of many users. 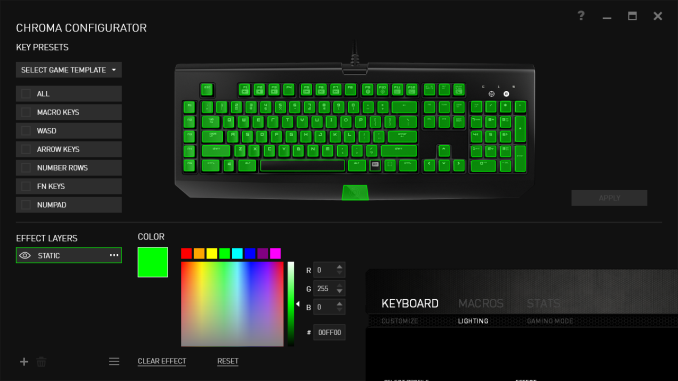 With the BlackWidow Chroma being a fully programmable keyboard, the ability to program multiple profiles and the individual programming of each key are required features. The Razer Synapse software does offer these, with the ability to save multiple profiles and either link them to automatically initiate along with the launch of a program or manually switch between them by using keyboard shortcuts. Each key can be reassigned to perform other functions than their standard intended purpose, from simple layout changes and mouse commands to complex macros and external software launches.

However while the Razer software has basic macro usage covered, users looking for more advanced control are going to come away disappointed. The macro recorder is severely outdated and limited, with the ability to record only keyboard keystrokes and delays. These are editable after the recording but only individually and other commands cannot be inserted manually. It cannot record mouse functions at all, let alone absolute on screen coordinates and more complex actions. By all means, this level of macro programming is not going to satisfy most advanced users, who will most definitely resort to third-party software for that.

As this is an RGB keyboard, Razer added functions to accommodate that feature. In its basic form, the user can only select from six full-keyboard effects. More effects can be downloaded and added from the company's website. If the user wishes to program the keyboard manually, the "Chroma configurator" opens a second window that allows for the individual programming of each key or of specified groups of keys. From this window, each and every key can be individually programmed, allowing the creation of custom chromatic layouts and special effects. The only issue is that the software appears to be buggy and the main window always remains on the front layer of the desktop, blocking the Chroma configurator window. And though admittedly a minor complaint, this means that the Razer software realy only works on screens with a resolution of 1680x1050 or higher, as it is otherwise very difficult to operate this particular feature.

Finally, the last tab hosts a recorder of usage statistics. By default, all recording is disabled. If enabled, the users can check how many keystrokes have performed, the travel distance of all these keystrokes, the number of profile switches and macros. The results can be filtered for individual games and time periods. It is not a functionally important feature, but it undoubtedly is fun.