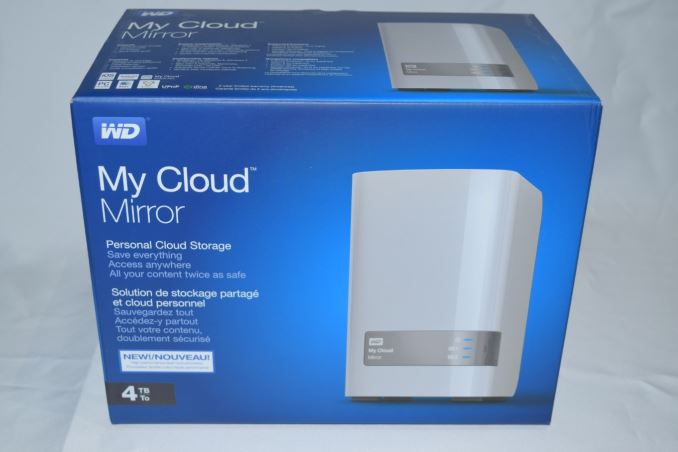 Western Digital is well known to the average consumer as a hard drive manufacturer. By extension, it also opens up the network-attached storage (NAS) market to them. In the second half of 2013, the company started to unify their embedded Linux-based offerings under the My Cloud tag. The My Cloud network attached hard disk and the My Cloud Mirror (2-bay offering) targeted home users, while the EX 2-bay and 4-bay units targeted prosumers and small office / home office (SOHO) installations. For business users, the DL series was introduced earlier this year. A few weeks back, Western Digital announced an updated operating system for the My Cloud units - My Cloud OS 3. Along with that, the My Cloud Mirror Gen 2 was also introduced. In this review, we will take a look at the My Cloud Mirror Gen 2 and the features enabled by My Cloud OS 3.

Western Digital's embedded Linux-based NAS offerings target a wide range of market segments. The My Cloud Mirror Gen 2 targets the typical average consumer - someone who has a vague idea of what network attached storage means, but has never used one in his setup. This type of customer is typically not very tech-savvy, and so, ease of use is very important. Several features that power users take for granted might not be necessary in a product targeting such a consumer. Eagle-eyed consumers might note that the My Cloud Mirror Gen 2 and the My Cloud EX2 share a similar chassis. The difference between the two is in terms of firmware features. The following aspects are not supported in the My Cloud Mirror Gen 2:

Compared to the My Cloud Mirror model from last year, the Gen 2 version has a faster internal platform. While Gen 1 used the Marvell ARMADA 370 SoC with a single-core ARMv7 CPU running at 1.2 GHz, the Gen 2 uses the Marvell ARMADA 385 SoC sporting two ARM Cortex-A9 cores running at 1.33 GHz. Other than that, the other specifications such as the external I/O ports and amount of RAM on the board remain the same. As we shall see later, the faster CPU will definitely be of help in handling the extra features provided by the My Cloud OS 3.

Given the nature of the target market, there is no diskless version of the My Cloud Mirror Gen 2. Western Digital ships three capacity points - 4TB, 6TB and 8TB, priced at $310, $370 and $410 respecitvely. The units ship with two WD Red drives (with NASware 3.0) of equal capacity.

The various specifications of the NAS are backed up by the data gleaned via SSH access to the unit. The lspci output refers to the PCIe lanes on the 88F682x [Armada 385] ARM SoC. The actual part number is 88F6821 according to Marvell's specifications list. 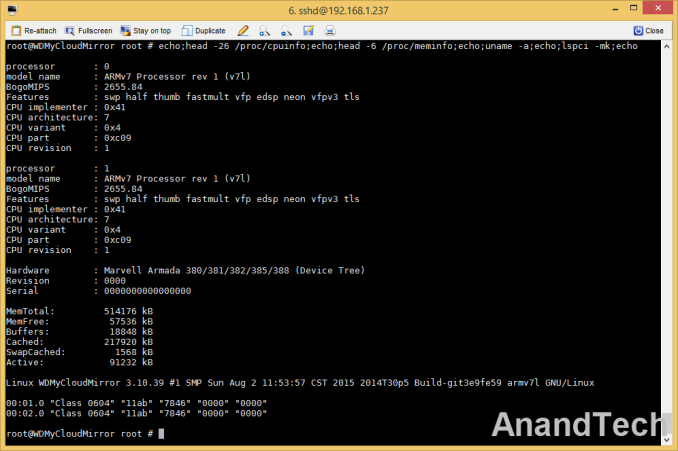 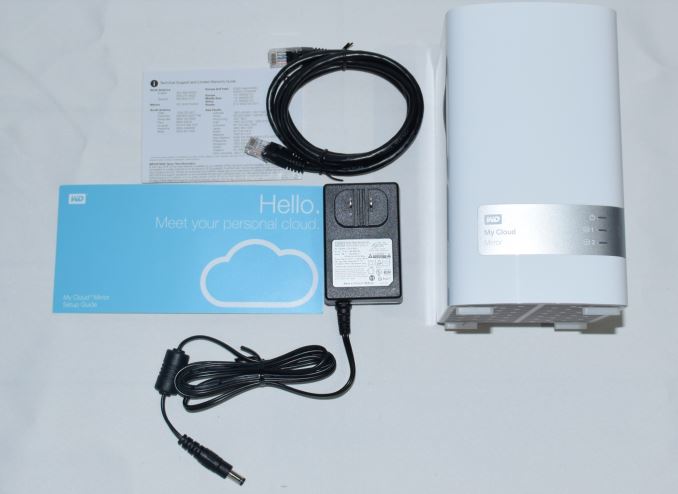 The industrial design of the unit is similar to what was used in previous two-bay solutions that supported replacement of disks by users - the WD EX2 and the WD My Book Duo come to mind. Even though hot-swap is not officially supported, we did observe that hot-swapping worked - streaming of content from the NAS was not interrupted when one of the disks was suddenly yanked out. Adding a new disk to the volume was also not an issue as long as the instructions in the web interface were followed. Coming back to the chassis design, the disk removal mechanism is not completely tool-less. After popping open the top of the My Cloud Mirror Gen 2 unit, a metal flap needs to be unscrewed and the disks need to be pulled out with an attached tag (pictures in the gallery below). This requires a little bit of force while tugging. Considering that consumers have been taught to treat hard disks as fragile and not to be subjective to excessive force, this is not a pleasant experience. On the other hand, Western Digital might not be expecting consumers in this target market to replace the drives on their own.

In the rest of the review, we will take a look at how to setup and use the WD My Cloud Mirror Gen 2. We will also be looking in detail into the official WD apps on the mobile (WD My Cloud) and desktop (WD Sync) side. This is followed by benchmark numbers for both single and multi-client scenarios using a CIFS share. Finally, we will also talk about power consumption and RAID rebuild numbers. Prior to all that, we will take a look at our testbed setup and testing methodology.

The WD My Cloud Mirror Gen 2 can take up to 2 drives. Users can opt for either JBOD, RAID 0 or RAID 1 configurations. WD ships the units by default with the WD Red drives in RAID-1 (mirror). However, to keep things consistent across different NAS units, we benchmarked the unit with two Western Digital WD4000FYYZ RE drives. Our testbed configuration is outlined below.

The above testbed can run up to 25 Windows 7 or CentOS VMs simultaneously, each with a dedicated 1 Gbps network interface. This simulates a real-life workload of up to 25 clients for the NAS being evaluated. All the VMs connect to the network switch to which the NAS is also connected. The VMs generate the NAS traffic for performance evaluation. However, keeping in mind the nature of this unit, we restricted ourselves to a maximum of 10 simultaneous clients.