To dive right into the heart of matters then, after getting our standard benchmarks out of the way we had enough time left to load up some of our more advanced analysis tools to run on the 820 MDP/S. While Qualcomm has been somewhat forthcoming in the Kryo CPU architecture, they have never been as forward as say ARM (who is in the business of licensing the IP), so there are still some unanswered questions about what Kryo is like under the hood.

One thing that immediately jumps out is how similar some of our results are to Krait. According to our initial tests, the number of integer and FP ALUs would appear to be unchanged. Similarly the latency for a lot of operations is similar as well. This isn’t wholly surprising as Krait was a solid architecture for Qualcomm, and there is a good chance they agreed and decided to use it as their starting point. At the same time however I do want to note that these are our initial results done rather quickly on what’s essentially a beta device; further poking later on may reveal more differences than what we’ve seen so far.

But with the above said, there’s a big difference between how many execution units a CPU design has and how well it can fill them, which is why even similar designs can have wildly different IPC. We’ll investigate this a bit more in a moment, however it’s worth noting that this is exactly the philosophy ARM has gone into with Cortex-A72, so it is neither unprecedented nor even unexpected. 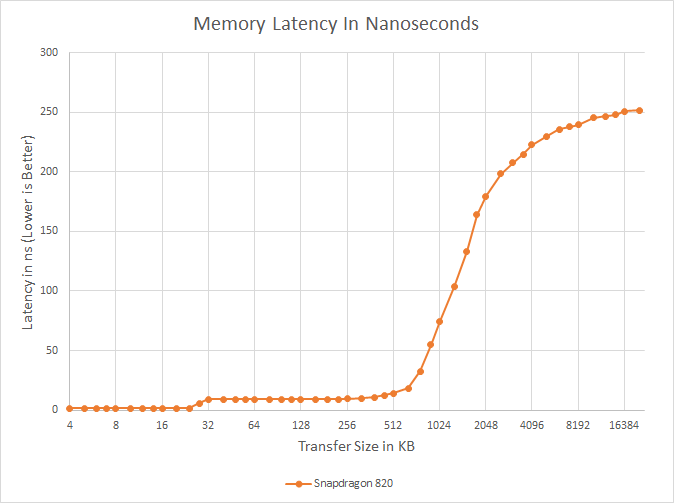 Looking at the memory hierarchy and latency, our results point to a 32KB L1 data cache. For the moment I’m assuming the instruction cache is identical, as is the case on most designs, but this test is purely a data test. Meanwhile L2 cache size is a bit harder to pin down; we know that the different CPU clusters on 820 will be using different L2 cache sizes. Ultimately it's pretty much impossible to pin down the exact L2 cache size from this test alone, especially since we can't see the amount of L2 attached to the lower clocked Kryo cluster.

According to our colleague Matt Humrick over at Tom's Hardware, while investigating the matter, it seems that Qualcomm disclosed that we're looking at an 1MB L2 for the performance cluster and a 512KB L2 for the power cluster. We're still looking into independently confirming this bit of information with Qualcomm.

However what you won’t find – and much to our surprise – is an L3 cache. Our test results indicate (and Qualcomm confirms) that Snapdragon 820 does not have an L3 cache as we initially expected, with the L2 cache being the highest cache level on the chip. We initially reported there to be an L3 due to the fact that we found evidence and references to this cache block in Qualcomm's resources, but it seems the latest revision of the SoC doesn't actually employ such a piece in actual silicon, as demonstrated by the latency graph. This means that there isn’t any kind of cache back-stopping interactions between the two CPU clusters, or between the CPU and GPU. Only simple coherency, and then beyond that main memory.

Meanwhile looking at Geekbench 3 memory performance, one can see that memory bandwidth is greatly improved over both Snapdragon 800/801 and 810. Stream copy in particular is through the roof, increasing by 131% (over double 810’s performance). Even the other tests, though not as great, are between 55% and 103%. The Snapdragon 820 also shows improved latency to main memory when compared to the Snapdragon 810, so it seems that Qualcomm made definite improvements in the memory controller and general memory architecture of the chipset, allowing the CPUs to get nearer to the theoretical total memory bandwidth offered by the memory controllers.

Moving on, let’s shift to some benchmarks that make a more comprehensive look at performance, starting with SPECint2000. Developed by the Standard Performance Evaluation Corporation, SPECint2000 is the integer component of their larger SPEC CPU2000 benchmark. Designed around the turn of the century, officially SPEC CPU2000 has been retired for PC processors, but with mobile processors roughly a decade behind their PC counterparts in performance, SPEC CPU2000 is currently a very good fit for the capabilities contemporary SoCs.

Even though this early preview means we don’t have the luxury of building a binary with a compiler aware of Kryo, using our A57 binaries produces some preliminary results on the 820 MDP/S. Performance does regress in a couple of places – but in other places we see performance increases by up to 52%. 820 does have a slight 10% frequency advantage over 810, so when taking into account the clock difference the IPC improvements are slightly lower. This is also showcased when comparing the Snapdragon 820 to a more similarly clocked Exynos 7420 (A57 @ 2100MHz), where the maximum advantage drops to 33% and similarly to a clock-normalized Snapdragon 810, the overall average comes in at only 5-6%. Once we get the opportunity to have more time with a Snapdragon 820 device we'll be able to verify how much the compiler settings affect the score on the Kryo architecture.

Our other set of comparison benchmarks comes from Geekbench 3. Unlike SPECint2000, Geekbench 3 is a mix of integer and floating point workloads, so it will give us a second set of eyes on the integer results along with a take on floating point improvements.

The actual integer performance gains with GeekBench 3 are rather varied. Single-threaded results consistently show gains, ranging from a minor -5% regression for AES up to a 61% improvement for SHA2. Given the architecture shift involved here, this is a bit surprising (and in Qualcomm’s favor) since you wouldn’t necessarily expect Kryo to beat Cortex-A57 on everything. On the other hand MT results typically show a regression, since Snapdragon 810 had a 4+4 big.LITTLE configuration that meant that it had the 4 Cortex-A53 cores contributing to the task, along with the big cores all running at their near-full clockspeed, while Kryo’s second cluster runs at a reduced clockrate. And though one could have a spirited argument about whether single-threaded or multi-threaded performance is more important, I’m firmly on the side of ST for most use cases.

GeekBench 3’s floating point results are even more positive for Snapdragon 820. There is only a single performance regression, a -3% in Mandelbrot multi-threaded. Otherwise in both MT and ST workloads, performance is significantly up. This is a prime example of where Kryo is taking better advantage of its execution units than any high-end Qualcomm SoC before it, as even holding steady (or on paper having a slight deficit) it in practice comes out significantly ahead.