The BRIX mini-PC line from GIGABYTE is an odd internal mashup within the company whereby the server business unit designs it, but the consumer arm does the marketing and sales. We’ve covered several BRIX units in the past, focusing on new technologies such as Iris Pro as well as the mobile CPU line. The BRIX design is made to offer a very small way of building a base PC, similar to the NUC. If we remember back a couple of years ago, GIGABYTE did a couple of models in red and green, with integrated mobile GPUs from AMD and NVIDIA respectively, aimed at the gaming market. These stalled for various reasons, partly because the mini-PC market isn't focused at gaming, and the power of the GPUs in play. So fast forward to 2016, and at CES this year GIGABYTE had a different take on the design and was asking for input from booth attendees. 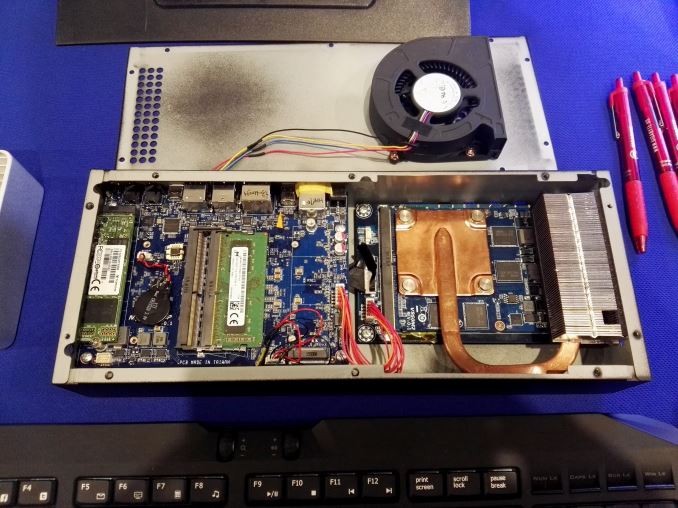 The design is straight forward – an upgraded BRIX on the left, featuring dual DDR slots (could be DDR4 depending on the CPU) and dual M.2/SATA connections with hope on PCIe and NVMe support, and then on the right we get an MXM GPU using the built in heatsink not too dissimilar to one we would see on a laptop. This this configuration we were told that the demo unit was an i3-6100H paired with a GTX 950M, but there is obviously scope here for something both high and low end. The dimensions came in at slightly longer than double a standard BRIX, and obviously it looks like nothing is finalized yet given that GIGABYTE is just testing the waters with this sort of model. One thing I’d worry about is audio quality, especially if they are derived from mobile platforms in a small space. Aside from that, I say bring it on, and even look into professional uses in premium designs.