In the next several years Samsung Foundry will continue to use its 14 nm, 10 nm, and 7 nm nodes perfected for particular applications either by optimizations or by plugging in advanced modules. 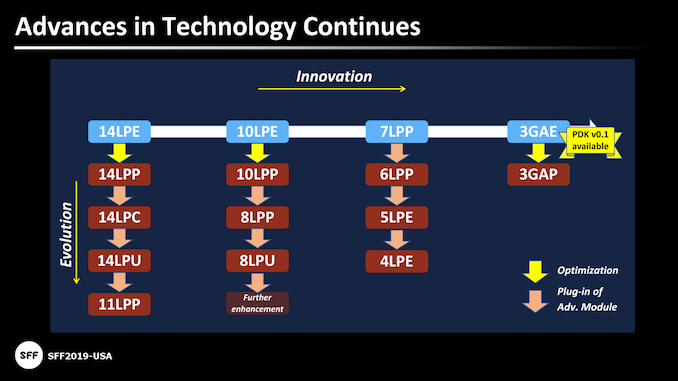 Like other contract makers of semiconductors, Samsung refines each of its nodes in order to meet requirements of various applications and clients rather than leaps ahead with radically different nodes every 18 – 24 months (like makers of chips used to do traditionally). Considering all the difficulties that engineers have to overcome developing new manufacturing technologies, the approach allows Samsung to better manage its R&D costs and manufacturing risks.

As expected, extreme ultraviolet lithography (EUVL) will be a key enabler for Samsung’s leading-edge next-generation fabrication processes. The first technology to use EUV is 7LPP and its successors will use it more extensively. 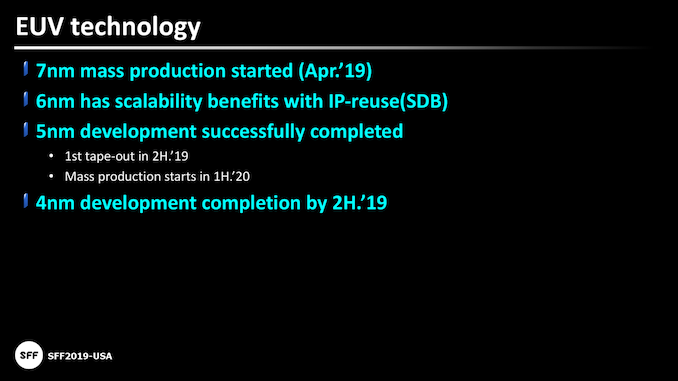 Later this year Samsung will initiate production of chips using its 6LPP process technology, which returned to its roadmap earlier. Samsung’s 6LPP is a refined version of Samsung’s 7LPP that offers higher (~10%) transistor density, lower power, but can re-use IP originally designed for 7LPP. In addition, 6LPP supports smart structures for clients willing to develop all-new new IP. As a result, Samsung Foundry’s clients will either be able to re-use their 7LPP IP without smart structures, or go with the latter, but will have to rely on new IP. In addition to smart structures, 6LPP will add support for things like multi diffusion break.

The next step in evolution of Samsung’s 7LPP production technology will be its 5LPE manufacturing process. This one provides more benefits when it comes to power, performance, and area than 6LPP, but can also reuse IP originally designed for the initial process. Samsung expects to tape out the first chips using its 5LPE technology in the second half of this year and expects to mass produce it in the first half of 2020. 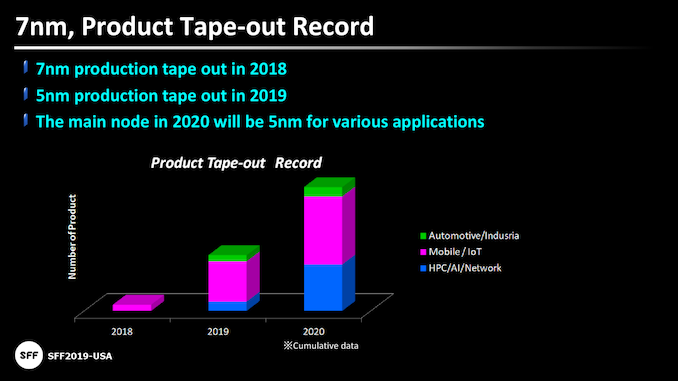 Samsung Foundry expects 5LPE to become its main EUVL node in 2020 in terms of customer tape outs, probably because the technology will be able to offer numerous benefits for a wide variety of applications, whereas Samsung’s EUV yields will get higher. Another reason why 6LPP and 5LPE technologies will be used more widely than 7LPP process is because Samsung Foundry will have more EUV capacity in the coming months after it builds its EUV line in Hwaseong, which was architected for the EUV equipment from the start. The fab, which costs $4.615 billion, will be completed shortly and is projected to start high-volume manufacturing in 2020.

The pinnacle of Samsung’s 7LPP evolution will be the company’s 4LPE technology (and possibly 4LPP that is absent from the latest Samsung Foundry roadmap). The foundry will complete its development in the second half of this year, so expect the first tape out in 2020 and volume production sometimes in 2021.

The official statement by Samsung about its Foundry Business reads as follows:

“For the Foundry Business, results were robust on the back of strong demand from a major customer’s 8/10-nm mobile AP and image sensor products. In addition, new orders from customers increased in the 10/14-nm process and applications diversified to include mobile, HPC, automotive and network products. In the second half, earnings growth is expected to continue due to the ongoing expansion of orders for AP, image sensors and DDI as well as increased demand for HPCs, including crypto currency mining chips. The Company plans to start mass production of EUV 6-nm process and aims to strengthen its competitiveness through tape-out of the EUV 5-nm process and by completing 4-nm process development.”