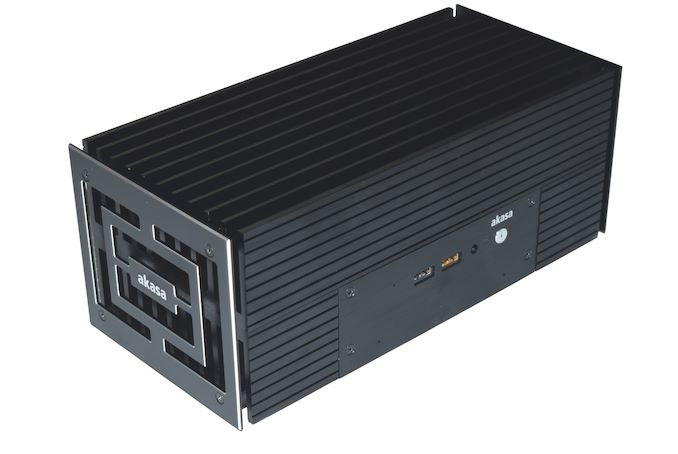 Silent computing systems are preferable for a multitude of use-cases ranging from industrial applications (where dust and fans make for a troublesome configuration) to noiseless HTPCs (particularly for audiophiles). Akasa has been providing thermal solutions in multiple computing verticals for more than 20 years, with a particular focus on passive cooling. Akasa targeted the NUC form-factor early, with the introduction of the Newton chassis for Ivy Bridge NUCs in early 2013. Last year, the company unveiled the Turing fanless case for the Bean Canyon NUCs. It marked a complete re-design of their NUC solution. This review takes a look at the build process and performance characteristics of a NUC8i5BEK board in the Turing chassis.

Use-cases for many silent or decade long deployment computing systems require the complete absence of any moving parts. In industrial deployments, the reason may be the need to avoid performance loss due to cooling efficiency degradation resulting from dust build-up. For professional creators, it may be due to the need to avoid extraneous noise affecting the work output. The average home consumer may also prefer a silent system to better focus on the work at hand. For HTPCs, multimedia content can be enjoyed without distractions - an aspect that may be of paramount importance to audiophiles.

Traditionally, passively cooled computing systems have either been woefully underpowered for general purpose use, or carried a significant premium in terms of both cost and physical footprint. Recent advancements in compute performance per watt and novel passive cooling chassis designs (that do not cost an arm and a leg to mass-produce) have combined to give consumers the ability to create powerful, yet affordable, fanless systems. Akasa has been offering passively-cooled cases for NUC boards since 2013.

Akasa introduced their first NUC fanless chassis for the Ivy Bridge NUC, and quickly expanded their offerings to include standard desktop, low-profile, and waterproof models. Since then, each generation has seen variants of the same chassis with a few tweaks. Once ever few years, the company has thrown in some interesting re-designs. Broadly speaking, the fanless NUC cases from Akasa fall into one of these families:

The Plato models are low-profile (38.5mm in height), while the Pascal models are IP65-rated (waterproof). The Turing has a contemporary design. Almost all of the recent models support 2.5" drive bays. The Akasa offerings for various NUCs are summarized in the table below.

Akasa had provided us with a review sample of the Turing from the first batch last year, and Intel sent us the NUC8i5BEK (Core i5-based Bean Canyon NUC) for use with the Turing. This provided us with the opportunity to look at the performance characteristics of the actively cooled version and compare it against the Turing-based passively cooled one for the same BIOS settings and internal hardware configuration. 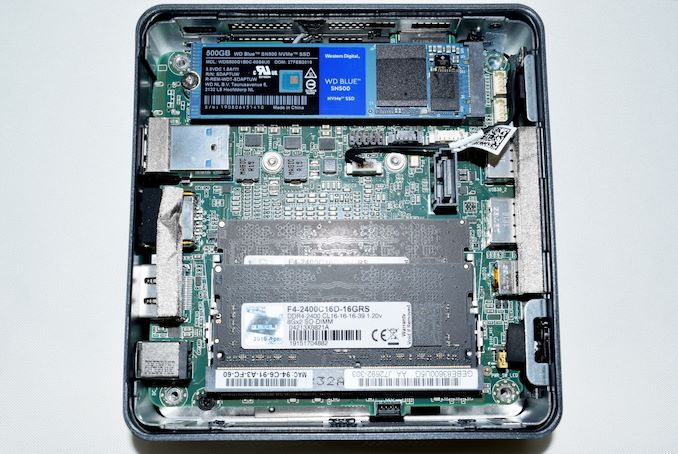 A judicious choice of build components tuned for low-power and energy-efficient operation is advisable for passively-cooled builds. Towards that, we chose DDR4 SODIMMs that had a maximum operating frequency corresponding to the qualified memory type for the NUC8i5BEK. On the storage side, we chose a DRAM-less entry-level NVMe SSD with good power efficiency.

Note that these components are from the time of the build last year - Since then, WD has introduced the SN550 PCIe 3.0 x4 NVMe SSD as an update for the same entry-level segment.

This review will not go into the hardware features of the Bean Canyon NUC. For that, readers may refer to the review of the NUC8i7BEH - the version with a Core i7 processor. The Core i5 version being looked at today carries over all the features that matter - a 28W TDP processor with four cores and eight threads, Iris Plus Graphics with integrated eDRAM, USB 3.2 Gen 2 (10Gbps) support on all external Type-A ports, a single Thunderbolt 3 port, and 4Kp60 support with HDCP 2.2 on the HDMI port. This configuration will serve users well even with the Tiger Lake NUCs on the horizon, particularly for non-HTPC applications. Unless 8K playback and AV1 hardware acceleration are needed, the Bean Canyon NUCs can do an excellent job even for HTPCs. 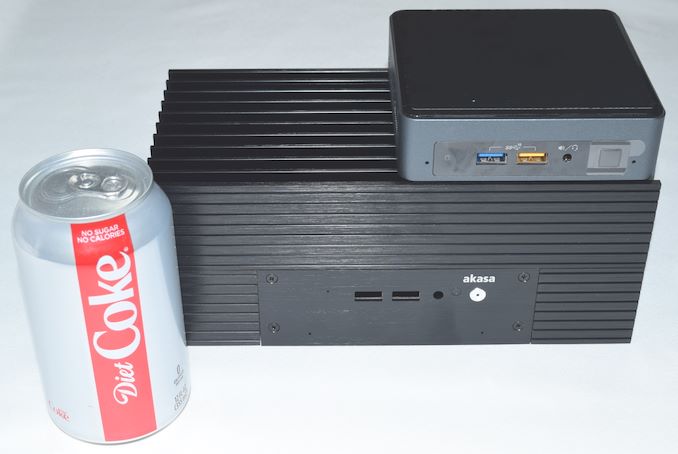 We put the standard kit through our benchmarking process first. Following that, we disassembled the unit, and transferred the board to the Akasa Turing. The same benchmarks were processed again on the Turing build. The power consumption and thermal stress tests were performed on both units. In addition to the comparison between the actively-cooled and passively-cooled versions of the NUC8i5BEB, we also consider some of the other passively cooled PCs reviewed earlier, as well as a couple of other recent UCFF NUCs. In the table below, we have an overview of the various systems that we are comparing. The relevant configuration details of the machines are provided so that readers have an understanding of why some benchmark numbers are skewed for or against the Intel NUC8i5BEB (Akasa Turing) when we come to those sections.

Prior to a discussion of the performance characteristics of the passively-cooled configuration, it is worthwhile to take a look at the build process for the machine. This is followed by a couple of sections devoted to the benchmark numbers for various workloads in order to determine if going the fanless route entails leaving out some performance potential on the table. A section on the HTPC aspects and a detailed discussion of the power consumption and thermal performance of the build precedes the concluding remarks.