Ever since the launch of Intel’s 11th Gen Core mobile processors, known as Tiger Lake, back in September, the chips' limited core counts have not gone unnoticed. At a time where its competition is leveraging 8 cores in the same space, Intel seems limited to only 4 in the same 15-28 W power window. At the time, Intel stated that the base Tiger Lake design was aimed to be scalable, and that double sized variants were in the works. Today Intel has confirmed that those double-sized parts will be coming in Q1, in the form of Tiger Lake-H.

Back at Intel’s Architecture Day 2020, lead architect Boyd Philips stated that even though the standard Tiger Lake UP3 design contained four cores and 12 MB of L3 cache, designs with double the L3 cache were in the works. This was instantly interpreted that double core-count versions of Tiger Lake were in the works, given that in the last generation the higher-powered mobile processor line-up had been left to older 14nm processors to fill the gap, and that Intel normally launches products for both 15 W and 45 W at the same time. We had been expecting a fast follow on, with a launch sometime later in Q3'20, but it would appear that Intel has pushed this out to Q1'21. Intel says that these processors will start production and ship in Q1, which likely means that the actual products will come to market in Q2. 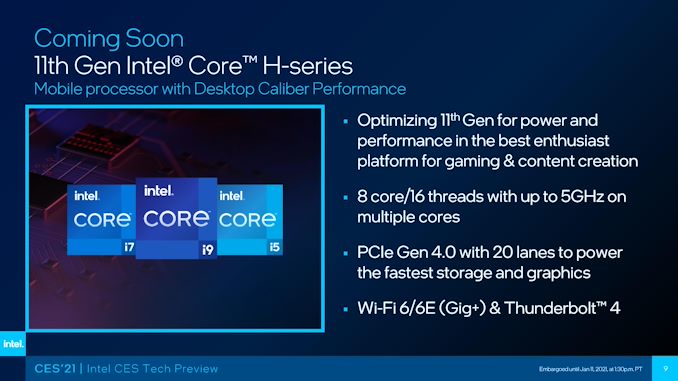 Intel has confirmed that these parts will offer up to eight cores and sixteen threads, with a highlight being that the top variants will enable 5.0 GHz turbo frequencies on multiple cores. These processors will also have 20 lanes of PCIe 4.0, which will allow for a full PCIe 4.0 x16 link to a discrete graphics card and a single PCIe 4.0 x4 storage drive at the same time, while also having a separate link for the chipset and IO. We expect these processors to also support PCIe Resizable BAR. And, like their current quad core counterparts, these processors will also have Thunderbolt 4 native support, as well as Wi-Fi 6/6E support through an associated RF module.

We wait to see exactly what specifications Intel will target with the new hardware. More detail to come.