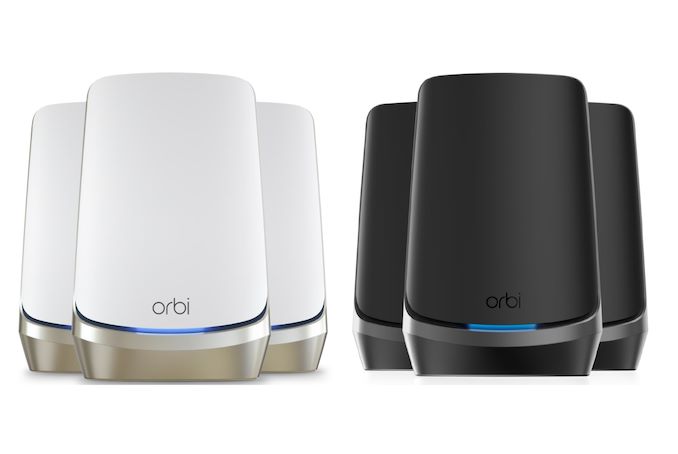 Mesh networking kits / Wi-Fi systems have become quite popular over the last few years. Despite competition from startups such as eero (now part of Amazon) and Plume (with forced subscriptions), as well as big companies like Google (Google Wi-Fi and Nest Wi-Fi), Netgear's Orbi continues to enjoy popularity in the market. Orbi's use of a dedicated backhaul provides tangible benefit over other Wi-Fi systems using shared backhauls. However, the costs associated with the additional radio have meant that the Orbi Wi-Fi systems have always carried a premium compared to the average market offerings in the space.

Netgear introduced their first Wi-Fi 6E router - the Nighthawk RAXE500 - at the 2021 CES. Priced at $600, the router utilized a Broadcom platform (BCM4908 network processing SoC + BCM46384 4-stream 802.11an/ac/ax radio). Today, the company is updating the Orbi lineup with a Wi-Fi 6E offering belonging to the AXE11000 class. Based on Qualcomm's Networking Pro Series 1610 (which integrates the IPQ8074 WiSoC and QCN9074 radios) platform, the company is touting their RBKE960 Orbi series to be the world's first quad-band Wi-Fi 6E mesh system.

Netgear's high-end Orbi kits have traditionally been tri-band solutions, with a second 5 GHz channel as a dedicated backhaul. With Wi-Fi 6E, a tri-band solution is mandated - 2.4 GHz, 5 GHz, and 6 GHz support are all needed for certification. The 6 GHz channel, as discussed previously, opens up multiple 160 MHz channels that are free of interference. The RBKE960 series supports the three mandated bands, and also retains a dedicated 5 GHz backhaul, making it a quad-band solution with combined Wi-Fi speeds of up to 10.8 Gbps across all four considered together. 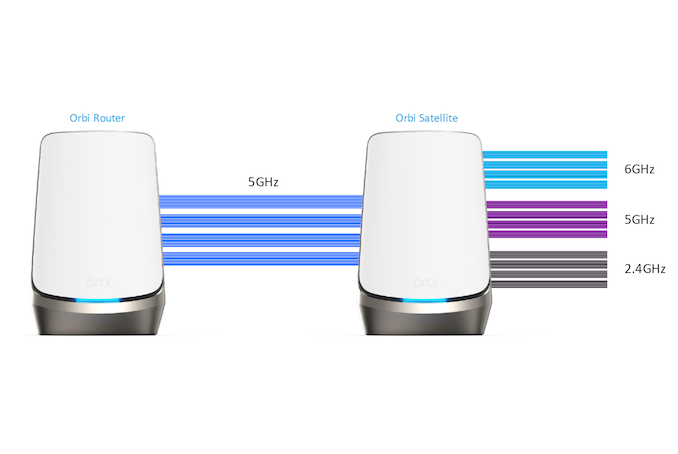 Netgear has opted to retain 5 GHz for the backhaul in order to maximize range. While the 6 GHz band is interference-free, the power restrictions prevent the communication in those channels from having as much range as the existing 5 GHz ones. Having a dedicated backhaul ensures that all the 'fronthaul' channels are available for client devices (shared backhauls result in a 50% reduction in speeds available for client devices for each additional node / satellite). The benefits of Wi-Fi 6E and what consumers can expect from the 6GHz band have already been covered in detail in our Nighthawk RAXE500 launch piece. The Orbi RBKE960 series supports up to seven 160 MHz channels, allowing for interference-free operation even in dense apartments with multiple neighbors.

The RBKE960 supports 16 Wi-Fi streams, making for an extremely complex antenna design. Netgear has made improvements based on past experience to the extent that the new Orbi RBKE960 performs better than the Orbi RBK850 even for 5GHz communication (the larger size of the unit also plays a part in this). 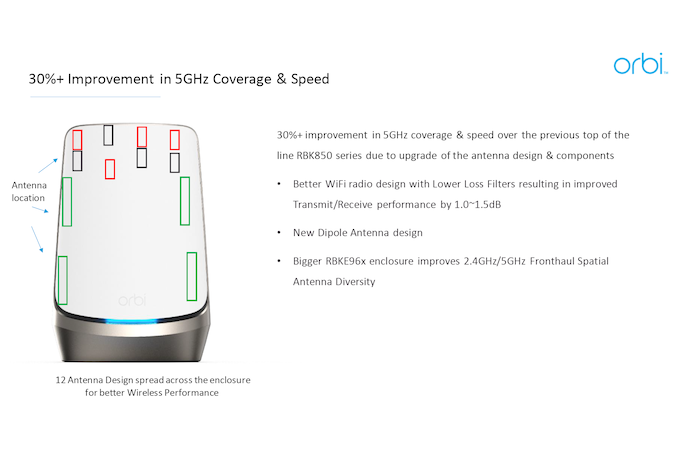 In terms of hardware features, the router sports a 10G WAN port, 3x 1GbE, and 1x 2.5GBASE-T ports. The satellite doesn't have the WAN port, but retains the other three. The 2.5GBASE-T port can be used to create an Ethernet backhaul between the router and the satellite. On the software side, the new Orbi creates four separate Wi-Fi networks for different use-cases. 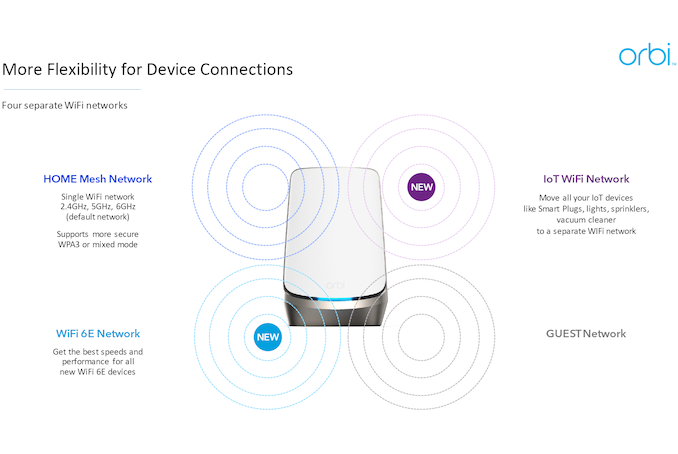 The reduced range in the 6GHz band means that large homes might require multiple satellites to blanket the whole area with 6GHz coverage.

Installation and management is via the Orbi app. Netgear also includes the NETGEAR Armor cyber-security suite with integrated parental controls - some features in Armor are subscription-based. 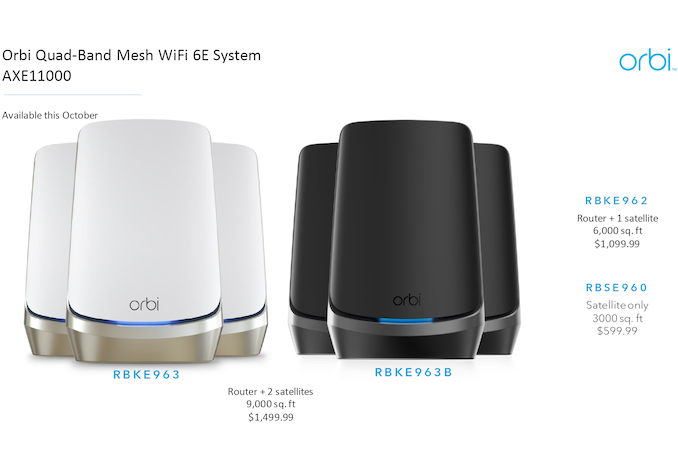 Netgear is also introducing an 'Orbi Black Edition' available exclusively on Netgear's own website. With the RAXE500 setting the stage with its $600 price point, it is no surprise that the RBSE960 satellite costs the same (trading the WAN port and other features for an extra 4x4 radio). A kit with a router and a single satellite (RBKE962) is priced at $1100, while the RBKE963 (an additional satellite) bumps up the price tag to $1500. With home Wi-Fi becoming indispensable thanks to the work-from-home trend among other things, Netgear believes consumers will be ready to fork out what is essentially the price of a high-end smartphone or notebook for a reliable and future-proof Wi-Fi solution.