Skyera Releases skyHawk FS All-Flash Array: Up to 136TB of NAND in 1U

Our enterprise storage coverage has mainly been focused on individual enterprise SSDs from the likes of Intel and Micron, but there's a lot of interesting action in the storage array space. I met with most of the big names in the array business at Flash Memory Summit this year, so with a better understanding of the market and with the right contacts, I think it's logical that we expand our enterprise storage content to cover arrays as well.

Since we haven't covered storage arrays or the companies involved in the past, I'll start with a brief introduction of Skyera. While Skyera is a relatively new company, the company is filled with experience and knowledge of storage and non-volatile memory industries. The founders of Skyera, Radoslav Danilak and Rod Mullendore, both worked at SandForce before founding Skyera in 2010. Mr. Danilak was actually the co-founder and CTO of SandForce, whereas Mr. Mullendore served as the Chief Hardware Architect.

While Mr. Danilak and Mr. Mullendore bring a lot of system-level hardware design knowledge to the company, what really separates Skyera from the rest is the NAND expertise. This is especially thanks to the CEO, Frankie Roohparvar, who was one of the founders of Micron Quantum Technologies in the early 90s. Micron Quantum Technologies was a manufacturer of NOR flash that was then acquired by Micron and basically formed the foundation of Micron's NAND business. Before joining Skyera in 2012, Mr. Roohparvar served at Micron for 13 years with his most recent position being the Vice President and General Manager of the OEM Division of Micron's NAND Solutions Group.

Skyera's approach to flash array design is to start from the lowest level, i.e. the NAND silicon. Obviously the company doesn't manufacture its own NAND but Micron, Toshiba, and SK Hynix are all investors in the company, which ensures a steady supply of NAND and also gives Skyera much deeper access to NAND than what typical customers get. What this means is that Skyera can run its own validation and 'trimming' (optimizing the read/write parameters etc.) process on the NAND to boost the endurance. The benefit is lower cost because Skyera's own process can increase the endurance of normal MLC NAND from ~3,000 P/E cycles to over 30,000 P/E cycles (or so I was told), whereas most companies are limited to buying off-the-shelf NAND, which either means cheap but low endurance cMLC or expensive eMLC. 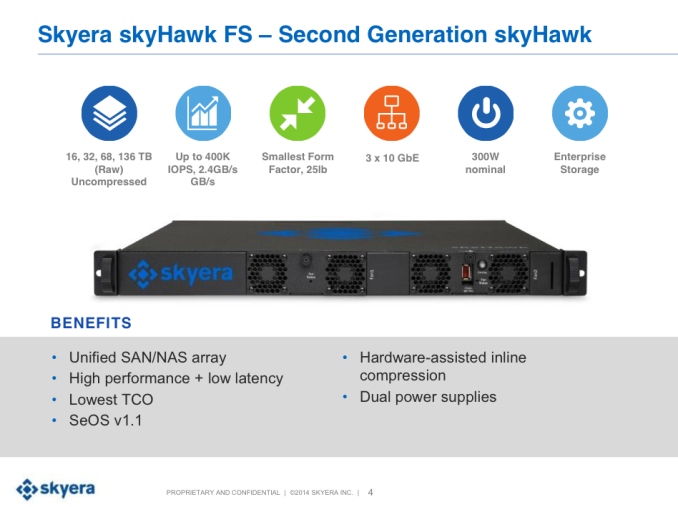 With the brief introduction of Skyera out of the way, let's focus on the skyHawk FS. It's offered in raw capacities of 16, 32, 68 and 136TB with all models utilizing the same 1U form factor. The final usable capacity depends on the provisioning of the array as well as the compressibility of the data since the skyHawk FS does compression in hardware (similar to what SandForce does). For comparison, Pure Storage, which is one of the leading all-flash array suppliers, only offers up to 11TB in 2U form factor, so Skyera has an enormous advantage in terms of density.

EDIT: Skyera doesn't actually do de-duplication like I initially said, so sorry for the mix up. The compression is still there, though.

The density advantage comes from Skyera's NAND expertise because the company builds its own drives (or blades as they are usually called) and can utilize the latest NAND lithographies available. While Skyera didn't specify the exact NAND that is used in the skyHawk FS due to the fact that there are multiple suppliers, I was told that the die capacity is 128Gbit and Micron's 16nm is one of the processes that is used. For the record, Crucial's MX100 and Micron's M600 are the only other products that I know of that use 16nm NAND right now and I know for sure that 16nm isn't available to the public in volume yet, so Skyera has an enormous advantage thanks to the close relations with the NAND manufacturers. 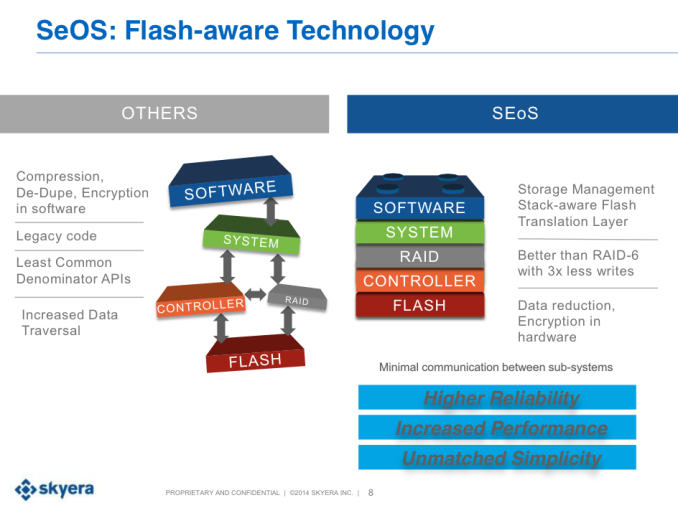 Software wise the skyHawk FS uses Skyera's own SEoS that has been designed solely for NAND. The vertically integrated business model allows Skyera to build the whole software stack around NAND, which enables a more global and adaptive Flash Translation Layer (FTL) for instance (i.e. the FTL can be managed at the system level instead of drive level). The design also allows the load to be split between the master controllers and the individual controllers in the blades for higher and more efficient performance, whereas with third party drives the drives would be doing their own management and the global/host management would be left for the master controller, resulting in a less efficient design.

In terms of performance, Skyera is rating the skyHawk FS at 2.4GB/s throughput and 400K IOPS with microsecond latencies, but unfortunately the IO sizes and queue depth are unspecified, so it's hard to draw any conclusions or comparisons from the numbers. The skyHawk FS has three 10Gbit Ethernet ports for connectivity and both iSCSI and NFS v3 protocols are supported. The skyHawk FS carries a 3-year warranty with no write endurance limitation, which is yet another advantage of Skyera's NAND knowhow.

The skyHawk FS is available immediately and is priced at $2.99 per raw gigabyte (i.e. with compression the real cost per gigabyte will come down).

Since this was our first flash array news post, I'd like to hear your feedback in the comments below. Would you like to see more content like this from us in the future? And if so, are there any specific topics or companies that you would like us to cover? The enterprise storage space is rather complex and there are a lot of companies involved, but we want to do our best to cover it (even in a limited matter) in the future, so let us know your thoughts.