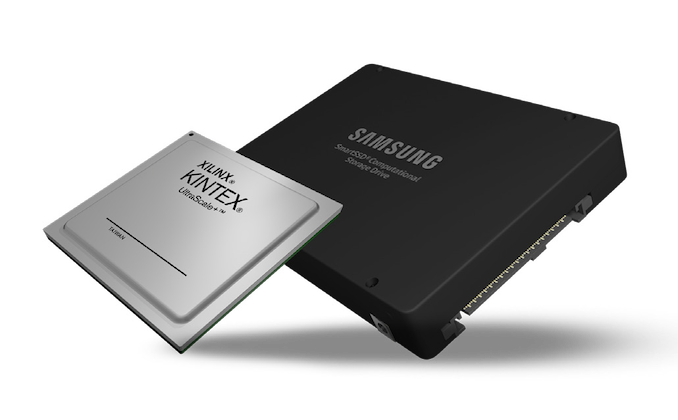 At Samsung's Tech Day 2018 they debuted a collaboration with Xilinx to develop Smart SSDs that would combine storage with FPGA-based compute accelerator capabilities. Their proof of concept prototype combining a Samsung SSD and Xilinx FPGA on a PCIe add-in card has evolved into a 4TB U.2 drive that has completed customer qualification and reached general availability.

The Samsung SmartSSD CSD includes all the guts of one of their high-end PCIe Gen3 enterprise SSDs, plus the second-largest FPGA from Xilinx's Kintex Ultrascale+ (16nm) family and 4GB of DDR4 specifically for the FPGA to use. The SmartSSD CSD uses a portion of the FPGA as a PCIe switch, so the FPGA and SSD each appear to the host system as separate PCIe endpoints and all PCIe traffic going to the SSD is first routed through the FPGA. 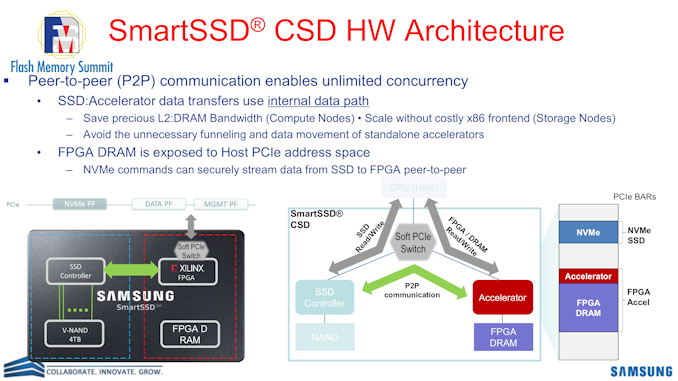 In a server equipped with dozens of large and fast SSDs, actually trying to make use of all that stored data can lead to bottlenecks with the CPU's IO bandwidth or compute power. Putting compute resources on each SSD means the compute capacity and bandwidth scales with the number of drives. Classic examples of compute tasks to offload onto storage devices are compression and encryption, but reconfigurable FPGA accelerators can help with a much broader range of tasks.

Xilinx has been building up a library of IP for storage accelerators that customers can use with the SmartSSD CSD, as part of their Vitis libararies of building blocks and and Xilinx Storage Services turnkey solutions. Samsung has worked with Bigstream to implement Apache Spark analytics acceleration. Third party IP that has been developed for Xilinx's Alveo accelerator cards can also be ported to the SmartSSD CSD thanks to the common underlying FPGA platform, so IP like Eideticom's NoLoad CSP are an option. 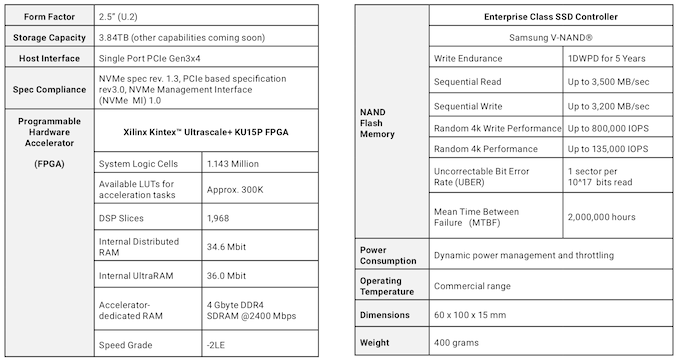 The Samsung SmartSSD CSD is being manufactured by Samsung and sold by Xilinx, initially with 3.84TB capacity but other sizes are planned.